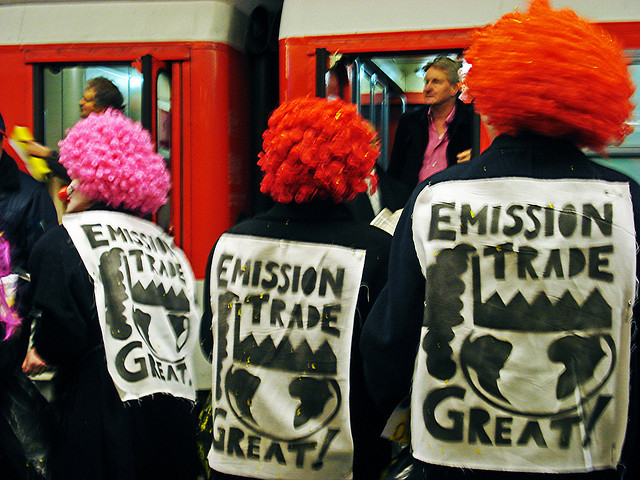 The European Parliament’s environment committee will decide on Tuesday (24 February) whether it wants the reformed Emissions Trading Scheme to start applying at the end of 2018 or earlier. A blocking minority of EU member states are pushing for an early start date. EURACTIV Czech Republic reports.

MEPs will vote tomorrow on the European Commission’s plan to withdraw hundreds of millions of surplus carbon allowances (EUAs) from the market and place them into a so called market stability reserve (MSR).

Members of the European Parliament’s environment committee (ENVI) may vote for 31 December 2018 as a starting date for the reserve’s operation, according to a compromise set of amendments tabled by the committee rapporteur Ivo Belet, a Belgian centre-right MEP (European People’s Party).

But the Greens and other left-of-centre political groups are still pushing for 2017 or early 2018 as a starting date.

The early start campaign received unexpected backing last week from an alliance of more than 60 utilities and associations in the energy sector, which believe the reform should be brought to life as soon as possible.

If the reform were to start as currently planned, the market will only reach balance later – in the second half of the next decade -, the utilities alliance claims. And even if the MSR starts in 2017, the market would not reach a balance until 2024, it says. This means only 12% of the overall surplus allowances could be actually withdrawn and placed into the reserve each year.

Opponents claim that the carbon market needs stability and predictability, which will be ensured by launching the MSR at the beginning of the next trading period, i.e. 2021.

This was the original intention of the European Commission, a position also defended by a blocking minority in the Council of the EU, which represents the 28 EU member states.

The Commission proposed setting up the reserve in January last year as part of the EU Emissions Trading System reform which aims to boost the value of EUAs.

Currently, the low price of allowances does not stimulate low-carbon investments which are needed to meet the EU’s climate goals.

At the moment, there is a surplus of more than 2 billion EUAs. According to the Commission’s plan, the number should range from 400 to 833 million to meet the ideal balance. Remaining permits should be set aside and released according to demand fluctuations.

A general consensus exists that the reserve would provide the carbon market with more flexibility. However, several issues arose in recent months regarding the details of the proposal.

One of them is the fate of 900 million backloaded allowances which were postponed in auctioning until 2019–2020. In Parliament, the environment committee is expected to vote in favour of placing these permits into the MSR. Part of the backloaded EUAs could be made available to support “breakthrough industrial demonstration projects,” MEPs say.

However, environment committee members are still divided over the start date.

Last week, the centre-right EPP group indicated its support to start the reform at the end of 2018. The Greens/EFA are standing firm on their claim for 2017, and the Socialists and Democrats would prefer the beginning of 2018 as the starting date.

“We suppose that the environment committee will support the most ambitious proposal,” said Vertis, an environmental commodities broker company. “However, a risk exists, that the proposal will be returned to the committee if the plenary session does not approve it.”

If a compromise is found, the trader expects the Parliament to take a final decision already in March. After that, MEPs will have to go through so-called trilogue negotiations with the Commission and Council.

According to sources, the Council could reach a common negotiating position in March. The Latvian Presidency already indicated it would like to see a final agreement before the end of its term, which expires on 30 June.

The Council blocking minority keeps advocating 2021 as a start date for the MSR. Among them are several Central European countries, such as Poland and the Czech Republic. Prague insists that an agreement on MSR alone can stabilise the market and boost the price of EUAs.

Countries like Britain and Germany, which back zero-carbon generation based on nuclear or renewable power, have led calls to start the MSR already in 2017.

That is also what the group of energy companies is pushing for. “Establishing  an  MSR  now,  whilst  bringing  forward  the  Phase  IV  EU-ETS  proposals  right  after  MSR adoption, including further plans for appropriate carbon leakage protection post 2020, is sound industrial policy,“ the alliance wrote in their letter to MEPs.

But carbon prices are currently far too low to provide that incentive, with prices currently hovering at €5 per tonne, below the €20 or €30 analysts believe is needed to make utilities switch to lower carbon energy generation.

To deal with the issue, the European Union has approved a "backloading" plan, which seeks to delay the sale of 900 million carbon permits until later this decade and prop up carbon prices.

The European Commission’s latest proposal is to establish a "market stability reserve" of carbon permits to curb supply in the ETS.