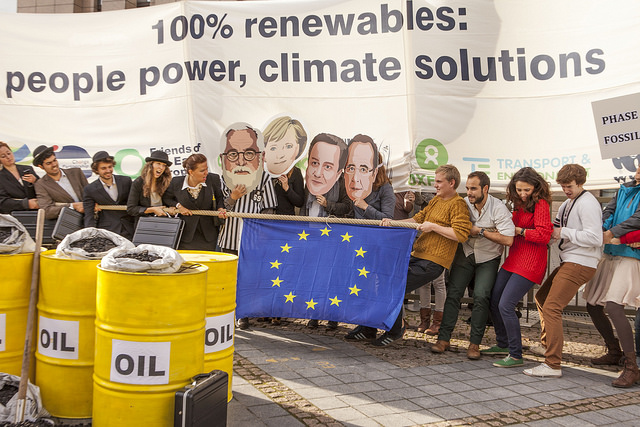 Green campaigners in a climate tug of war ahead of the EU ministers' meeting in Brussels. [WWF European Policy Office/ Flickr]

EU ministers on Friday (18 September) agreed upon the bloc’s negotiating mandate for the upcoming COP21 talks, including a 40% cut in greenhouse gas emissions by 2030 over 1990 levels, overcoming resistance from eastern member states.

EURACTIV exclusively revealed on Wednesday (16 September) that the environment ministers would reach a deal, despite the objections of countries such as Poland, Hungary, and the Czech Republic.

Poland’s elections next month complicated the debate, as the right-wing Law and Justice party has been campaigning on a promise to resist EU environment law and protect the coal industry.

But Friday’s talks were quicker than expected, as EU officials said Poland realised it was isolated and agreed to word changes that made no substantial difference.

The haggling to accommodate Poland also switched the word decarbonisation with “climate neutrality”. Polish officials said that allowed for technological solutions, such as carbon capture and storage, to do some of the work, reducing the need to change the fuel mix.

“We stand ready to conclude an ambitious, vast and binding global climate deal, and we will settle for nothing less,” EU Climate Commissioner Miguel Arias Cañete told a press conference in Brussels.

French Environment Minister Ségolène Royal told reporters that the meeting in Brussels recommitted to the 40% emissions cuts by 2030 over 1990 levels.

She also said the environment ministers agreed that the planned UN accord should incorporate five-yearly reviews to ratchet up efforts to fight climate change.

Cañete added that the EU would push for emissions to peak by 2020 at the latest, and have them reduced by at least 50 percent by 2050, compared to the 1990 baseline.

He said the EU goals were consistent with those of the UN which seeks to keep global warming to no more than two degrees Celsius (3.6 degrees Fahrenheit) over pre-industrial levels, which scientists see as key to avoiding catastrophic drought, floods and sea level rises.

“It’s a fair deal. It will get everyone on board,” Canete added.

He said it offered a long-term outlook for business, markets and lawmakers.

Despite the breakthrough, questions remain over how much time EU negotiators have to gain the necessary support from developing countries to deliver a robust enough deal.

Green campaigners held a “climate tug of war” stunt outside the meeting, to highlight the pressure that the fossil fuel industry was putting on the EU. They welcomed the agreement, but warned that there needed to be much more detail in how the bloc would reach the 40% pledge.

Liz Gallagher, climate diplomacy programme leader at E3G said, "Until now we’ve been doing what governments think is achievable, not what they know is necessary for a safe climate. The emissions reduction pledges won’t deliver the 2°C obligation but the EU Environment Ministers’ decision today keeps open the door for 2°C. It’s not enough, it’s a start. We need to guarantee a mechanism to ratchet up ambition every 5 years. This ratchet is one of the best levers at the EU’s disposal to disrupt low ambition lock-in from China, Australia, Canada and Japan and keep the climate negotiations on track.”

Susann Scherbarth, climate and energy campaigner for Friends of the Earth Europe, said: “This is not a promising sign for an international climate agreement. EU bosses have said today they want to be dealmakers at the climate talks in Paris, but they have not said they will take the action necessary to make it an adequate and fair deal.

“With today’s decision ministers have stayed on the side of the fossil fuel industry when they could have signalled their willingness to save energy and replace our energy system with a clean, renewable one led by people.

“The clean energy transformation is already happening all across Europe led by people and communities – today’s decision shows the EU’s so-called leaders are failing to even follow.”

Wendel Trio, director of Climate Action Network Europe said, "The call for a phase out of emissions from all the EU member states is an important signal that the EU still wants to reach a meaningful Paris agreement, which should provide an action plan for a transition to a fossil fuel free economy. The unanimous decision to end carbon pollution is what we expect from leaders at a time of a climate crisis. However, if we are to tackle climate change before it spins out of control, the EU needs to support its allies in the developing countries in their pledge for completing this transition by the middle of this century.

"We welcome the fact that the EU continues to call for a binding and transparent international climate regime. However, at the same time its negotiating position has blind spots which undermine the EU’s leadership role in climate negotiations. EU ministers failed to provide details on how they will scale up climate action, so that the transition to the fossil fuel free economy happens at a scale and pace needed to avoid the worst consequences of climate change."

Roland Joebstl, climate and energy policy officer at the European Environmental Bureau (EEB), said, "Today’s agreement shows that the European Union’s ability to lead the energy transition is still being sabotaged by laggards who misuse a tradition of unanimity. Member states like Poland that continue to block ambitious climate action are hampering the innovation necessary to move the world away from a fossil-fuel based economy towards one powered by renewables.

"Instead of arguments, we need leadership from EU leaders. The EEB therefore welcomes the commitment from Commissioner Canete this week to step up ambition for energy efficiency. This is exactly what we need to increase Europe’s overall ambition ahead of the COP in Paris and to go beyond a 40% cut in GHG emissions."

Geneviève Pons Deladrière, director of the WWF European Policy Office, said: “As climate change is speeding up and getting worse, it’s regrettable that EU Environment Ministers failed to spell out how the EU intends to increase its own climate and energy targets.

Citizens and communities around the world are already spearheading the shift to clean energy solutions and support moving out of coal and other fossil fuels.The Paris climate talks must be where the world decides to end the fossil fuel age, and where responsible governments agree how to speed up the global energy transition. If everyone swept in front of their own door, the whole world would be clean."

Markus Beyrer, BusinessEurope director general, said, "While EU ministers’ overall climate conclusions go in the right direction, a clear call for comparable efforts by major carbon emitting economies outside Europe is missing. The COP21 summit in Paris must be a deal breaker for European business. We want an international ambition that is in line with the efforts we are already committed to in Europe."

Lies Craeynest, EU climate policy advisor of Oxfam, said, "EU environment ministers again acknowledged the importance of financial support for climate action in poor and vulnerable countries in the Paris climate agreement. But to stop diverting development aid to climate finance, they must, at their next meeting, set aside part of the revenue generated from the EU’s flagship climate policy tool, the Emission Trading Scheme, for the Green Climate Fund. This could more than triple the EU’s current contributions to the Fund from 2020."

Greenpeace EU energy policy adviser Jiri Jerabek said: “The EU's position is still far from what is needed to reach an effective global deal. Europe can and should do more to speed-up the energy transition towards a renewable-based system and commit to phase out fossil fuels at home. In Paris, the EU should present a united front to support a long term global goal to phase out fossil fuels by 2050.”