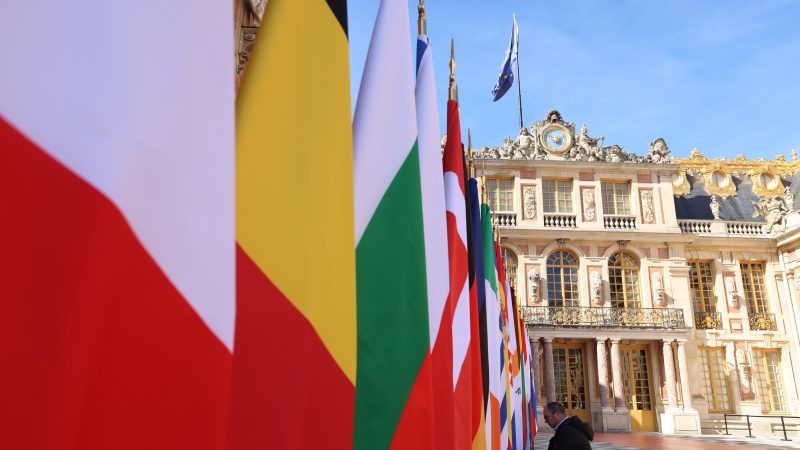 EU leaders will be meeting in Versailles, France, on 10-11 March. [Copyright: European Union]

Russia’s invasion of Ukraine prompted the European Commission to unveil plans this week to become independent from all Russian fossil fuels “well before 2030” and cut its dependence on Russian gas by two thirds before the end of this year.

On the same day, the US announced it would impose an immediate ban on all imports of Russian oil and other energy imports in retaliation for mounting aggression in Ukraine.

But Europe is more dependent on Russian oil and gas, making a ban in the EU far more costly to implement for the European Union.

Those concerns are reflected below in a roundup from the EURACTIV media network:

The staunchest supporter of all-out sanctions against Russia is Poland, even if that would hurt Europe’s economy.

“Billions are flowing to Russia via Nord Stream 1,” a Polish diplomat said, referring to a gas pipeline linking Russia to Germany. “These are billions for which today Ukrainians are paying with their own blood.”

While the country would suffer from an interruption of gas supplies from Russia, they believe they are well prepared due to increased imports of US LNG and the construction of the Baltic Pipe bringing gas from Norway. In 2019, the government announced that it would halt the permanent import of Russian gas once the current contract with Gazprom expires at the end of this year.

Slovakia also came out in support of an EU ban on all Russian commodities, including oil and natural gas, Prime Minister Eduard Heger said on Thursday (10 March).

“We cannot afford a restraint because it means a concession to Vladimir Putin. That is what the Russian president wants. We need to send a signal to Putin that we plan to cut ourselves off all energy from Russia,” he said.

However, the country’s Economic Minister Richard Sulík warned about the consequences for Slovak and European industry, saying a ban would hurt the EU more than Russia in the short term. Heger is from the anti-corruption OL’aNO party while Sulík is from the right-wing neoliberal SaS.

France too said it was ready to impose energy sanctions on Russia but also appears keen to keep the dialogue open with Moscow.

Asked whether Paris would support a boycott of Russian oil and gas, trade minister Franck Riester said: “France is ready to take additional decisions to put pressure on Russia if necessary”.

“We are not closing any doors, we simply have to look at what is effective in putting pressure on Russia and also taking into account the consequences that this may have on the EU and its various members.”

France has come under international scrutiny regarding the ongoing activities of French energy companies in Russia. “There is now a problem of principle in working with any political or economic figure close to the Russian government,” economy minister Bruno Le Maire said on 1 March.

“I am not here to dictate to Engie and Total what they should do. What is clear is that we want to have economic sanctions decided in a very united way with all the countries of the European Union and other countries – the United States and Canada. I think it is vital that Russia perceives that it has nothing to gain from this war, or at least that its leaders perceive this, and this is the whole point of the economic sanctions that we are taking.

Spain is another supporter of energy sanctions against Russia, although it does not make it a top political priority. Prime Minister Pedro Sánchez has said that Madrid would support any measure taken in coordination with the EU, including a ban on exports from Russia of oil and gas, if necessary.

That can be explained by Spain’s relatively low exposure to Russian oil and gas.

In Finland, Prime Minister Sanna Marin called for the EU to halt fossil fuel imports from Russia “as soon as possible”, but did not explicitly back an EU import ban at this stage.

Finnish companies have announced they will exit Russia. Big Finnish brands such as Fazer, Nokia, Wärtsilä and StoraEnso have left the country. Fortum, a 56% state-owned company, has been established in Russia for decades, where it owns and operates heat and electricity production in Siberia. Fortum has also invested in wind and solar in Russia. Last week the company said that it has decided to stop all new investments there.

Finland has decided to phase out coal in energy production in 2029, but many energy companies have already decided to get rid of coal earlier. Helen, one of the biggest Finnish energy companies owned by the City of Helsinki, has announced that it will stop using Russian coal.

Germany, the largest consumer of Russian oil in Europe, is adamantly against any sanctions on Russian energy. Vice-chancellor Robert Habeck warned this would endanger “social peace” in the country and pose a “real danger of energy undersupply in certain sectors”.

Leading opposition figures, such as Christian Democrat politician Norbert Röttgen, have spoken out in favour of a ban.

In Hungary, prime minister Viktor Orbán said he would oppose energy sanctions at the EU level. “While we condemn Russia’s armed offensive and we also condemn the war, we will not allow Hungarian families to be made to pay the price,” Orbán said on Tuesday (8 March). Hungary imports most of its oil and gas from Russia.

In Bulgaria, Prime Minister Kiril Petkov said his government supports sanctions on Russia but will seek an exception from a potential energy import ban.

“Bulgaria would support all kinds of measures because we are really against the war, but these two (oil and gas), maybe we would ask for an exception… We do not have current alternatives right now. We are too dependent,” Petkov said in an interview with Reuters.

In Italy, Prime Minister Mario Draghi did not express support or opposition to energy sanctions, insisting on the need for EU unity in dealing with the consequences of the Ukraine war. However, should the EU propose a ban on Russian oil, Italy will probably endorse it, according to a source cited by Bloomberg news agency.

“Italy is committed to a quick reduction in our dependence on Russian gas,” Draghi said earlier this week, adding he has been in talks with Qatar to diversify Italy’s gas supply.

In Rome, the government will reportedly replace about 16 billion cubic metres of gas from alternative suppliers by springtime. These could come from Qatar or the Arab world and the United States or Azerbaijan.

According to the latest news from Draghi’s cabinet, Italy plans to lower the gas price and decouple it from the cost of electricity by focusing on other sources of supply.

In Portugal, Prime Minister António Costa expressed doubts about a potential ban on Russian energy but did not rule out the possibility completely either.

In Costa’s view, energy sanctions on Moscow would “have a double dimension” and hurt the European economy as well. “We have to measure what is most effective in the pressure on Russia, but also measure the rebound effects that each of these measures also has on our economies and on the life of our societies,” he cautioned.

Costa said the US decision to ban Russian oil “is not something that directly affects Portugal” since the Iberian country does not import petroleum products from Russia. Still, he said: “the immediate effect [of this US decision] was a 7% rise in the price of oil. Therefore, we have to take into account that each measure we adopt is a measure that has consequences that are not limited to Russia,” he warned.

In the Czech Republic, the government has not adopted a clear position over a potential EU ban on energy imports from Russia.

Prime Minister Petr Fiala repeatedly said that the EU has to decrease its dependency on Russian fossil fuels imports but did not support an import ban. However, a vice-chair of the ruling ODS party, Czech MEP Alexandr Vondra, supports a ban on gas imports.

Czech economists argue that a ban on Russian gas would be dangerous for the Czech economy. At the same time, they say the country could cope more easily with an oil ban. Energy companies are assuring citizens that they have sufficient fossil fuels reserves for the next weeks and months.

In Greece, PM Kyriakos Mitsotakis said it was not realistic to ban energy imports from Russia but added that Europe should be prepared if Moscow moves ahead and decides to turn off the tap.

And Mitsotakis said Greece had accelerated efforts to decouple its economy from Russian gas. “we are strengthening the diversification of our sources. In January, for example, our country met 47% of domestic demand with LNG from the region Revithusa 20% through the TAP pipeline. Russian gas, which has over time been the largest share in the country’s gas import mix, fell to 33% for the first time.”

The country’s gas sector will not face shortages until 15 March. From 16 March and until the end of the month, there will be a gas deficit of about half a terawatt-hour.

In Slovenia, the government has made no public statements about banning energy imports from Russia. Talk has so far centred on the need to diversify supply sources, primarily focusing on natural gas, but no major announcements have been made.

All major energy companies are wholly or partially state-owned and are waiting for the government to take a stance. According to public statements, none of them has oil or gas projects in Russia.

In Romania, neither the government nor President Iohannis have spoken about a ban on Russian energy. However, they are nevertheless calling on the EU to end its dependence on Russian gas.

Romania has become increasingly reliant on Russia for its energy needs in recent years.

One response to “NETWORK ROUNDUP: EU split on Russian oil and gas ban”