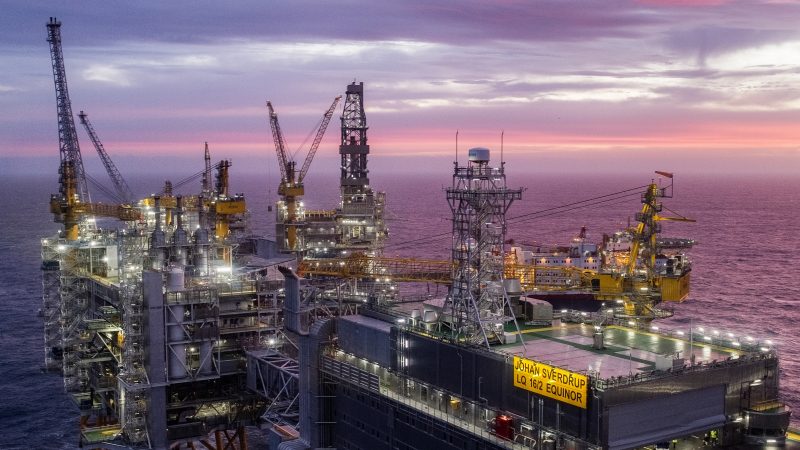 The Johan Sverdrup field centre in the North Sea, some 140km off the south western coast of Norway, is the third largest oil field on the Norwegian continental shelf, with expected resources of 2.7 billion barrels of oil equivalent. [CARINA JOHANSEN / EPA-EFE]

Two NGOs and six young climate activists have decided to take Norway to the European Court of Human Rights (ECHR) to demand the cancellation of oil permits in the Arctic, Greenpeace announced on Tuesday (15 June).

It is the latest in a legal tussle between environmental organisations Greenpeace and Young Friends of the Earth Norway on one side and the Norwegian state on the other.

The organisations are demanding the government cancel 10 oil exploration licenses in the Barents Sea awarded in 2016, arguing it was unconstitutional.

Referring to the Paris Agreement, which seeks to limit global warming to less than 2°C above pre-industrial levels, the organisations claim that the oil licenses violated article 112 of Norway’s constitution, guaranteeing everyone the right to a healthy environment.

“The six activists, alongside Greenpeace Nordic and Young Friends of the Earth Norway, hope that the European Court of Human Rights will hear their case and find that Norway’s oil expansion is in breach of human rights,” Greenpeace said in a statement.

While most of the judges on the court agreed that article 112 could be invoked if the state failed to meet its climate and environmental obligations – they did not think it was applicable in this case.

The court also held that the granting of oil permits was not contrary to the European Convention on Human Rights, in part because they did not represent “a real and immediate risk” to life and physical integrity.

“The young activists and the environmental organisations argue that this judgement was flawed, as it discounted the significance of their environmental constitutional rights and did not take into account an accurate assessment of the consequences of climate change for the coming generations,” Greenpeace said.

On Friday, the Norwegian government unveiled a white paper on the country’s energy future, which still includes oil exploration despite a warning from the International Energy Agency (IEA).

The IEA recently warned that all future fossil fuel projects must be scrapped if the world is to reach net-zero carbon emissions by 2050.

The Norwegian case is an example of a global trend in which climate activists are increasingly turning to courts to pursue their agenda.