“What I'm afraid of is that we are fighting the climate battle by increasing taxes on products,” says Nico Cué. “And here, it is always the weakest people who pay the bill,” he warns. [© European Union 2019 - Source : EP]

The lead candidate for the European Left at the May EU elections devoted much of his professional life to defending the rights of steelworkers in his native Belgium. He now brings his fight to the European level, adding shades of green to his political spectrum.

A metallurgist by profession, Nico Cué is “one of the most influential trade unionists in Belgium and Europe,” according to Le Soir, the leading French-speaking daily newspaper in Belgium.

His CV is typical of a trade union leader. He started working at 20 at the Herstal steel factory near the city of Liège in Belgium and moved up the ranks of unionism to become secretary general of Belgium’s steelworker confederation in 1997.

The 62-year-old is currently busy travelling across the continent to campaign for the European Left, a pan-European party that brings together communist and leftist parties from around Europe.

As the lead candidate for the European Left – together with Slovenian MP Violeta Tomič – Cué is in the running to become the next President of the European Commission after the May election.

So where does he stand on big environmental issues like climate change? EURACTIV spoke to Cué over the phone on the campaign trail, just as he was crossing airport checks.

“First, I want to tip my hat to the young people who have given a formidable boost to climate policy,” the Belgian trade unionist said from the outset, referring to the school climate strikes led by Swedish activist Greta Thunberg.

And although he supports the European Commission’s proposal to aim for net-zero emissions by 2050, reaching that goal will require “rethinking the entire production apparatus,” a far-reaching process that requires reviewing policies in almost every area, he says. 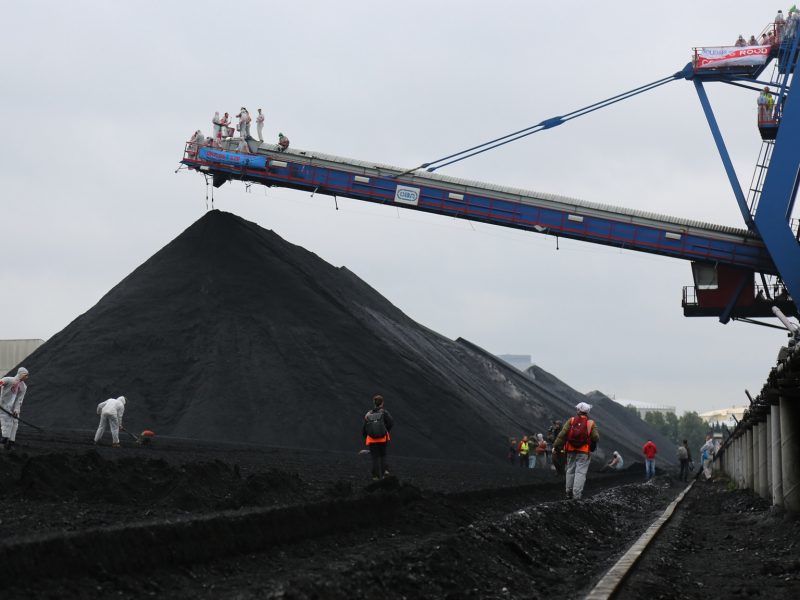 “I don’t have a problem with a decarbonised society. The problem is how we are going to get there,” Cué cautions. Merely setting up a carbon market like the EU has done isn’t enough to reach climate objectives, he believes, because it risks driving sensitive industries like steelmaking out of Europe.

According to him, a more holistic approach is needed, combining environmental, social and trade policies. That means elevating the European response to a new level, similar to what was done with Airbus in the aerospace sector, or the Galileo satellite navigation system.

“If we want to quit fossil fuels, we have to put everyone around the table to set up a European project financed by the European Central Bank (EC) or the European Investment Bank (EIB),” Cué says. That also implies “reviewing competition rules in a number of strategic areas” as well as trade relations with major economies like the United States, China and Japan, he points out.

And in industries where deep transformations are underway, social policies have to be embedded in the change process. “We’re talking about millions of jobs that risk being put in jeopardy,” he says, referring to the car industry’s transition to electric mobility.

What European politicians need to realise, he says, is that the transition to a green economy also brings major political risks if social policies aren’t included in the process.

“If we don’t do that, we will run into big difficulties,” Cué warns, saying populist leaders like US President Donald Trump or Italy’s Matteo Salvini will inevitably rise to power in countries where environmental policies are implemented without taking account of people’s everyday realities.

“What I’m afraid is that we are fighting the climate battle by increasing taxes on products,” he says. “And here, it is always the weakest people who pay the bill.”

For Cué, the ‘Yellow Vests’ protests in France have become a case study of climate policies gone wrong. The “just transition” cannot only be about pushing electric vehicles down the throats of people who are already in precarious situations, living in the outskirts of cities where there is no public transport, banks or post offices, Cué says.

“These people who are already struggling because their salary is low, telling them to buy an electric car – that’s not possible … I understand the anger of people,” Cué says.

For him, the green transition also means rethinking the way everyday products are manufactured, by ensuring consumer goods are either “100% recyclable” or designed to last longer by “putting an end to programmed obsolescence”.

Manufacturing supply chains should also be reconsidered, he contends. “It is not normal that consumer goods travel tens of thousands of kilometres, going through tax havens to benefit from transfer pricing, to mask the real cost of products,” he says.

“It is by tackling this type of international tax problems that the root causes of the loss of value – whether environmental or social – will be addressed,” he says