Norway on Friday (6 November) proposed to completely ban the use of heavy fuel oil (HFO) by shipping around the Arctic archipelago of Svalbard.

“A spill of heavy oil will be catastrophic for nature and the environment. But it will also have an impact on the reputation of tourism in Svalbard. Therefore, we must do everything we can to prevent the unthinkable,” Norway’s Minister of Climate and Environment, Sveinung Rotevatn, told NRK about the plans.

According to the minister, a spill around Svalbard could lead to major damage, because heavy oil is difficult to handle amid low temperatures and ice.

In addition, the work of cleaning up would be both costly and complicated in the event of a spill. This is because of large distances, difficult weather, and scarcity of response capabilities in the area.

“Svalbard has very vulnerable nature and large distinctive wilderness areas. Therefore, the government has set high environmental targets for Svalbard, which means that the risk of damage to the environment must be low. A ban on heavy oil that applies to the whole of Svalbard is a natural step to take to reduce this risk,” Rotevatn said in a press release.

At present, there is already a partial heavy oil ban in protected areas around Svalbard in place which only allows sailing if the ship runs on diesel or other more environmentally friendly fuels.

Over the last few years, the number of cruise ships with several thousand passengers visiting the archipelago’s main town Longyearbyen has drastically increased.

So far, no date for the start of the ban has been set as the proposal for the new regulation is meant to go through a public hearing in parliament.

The push by the government wants this to apply to the entire archipelago.

The Norwegian announcement also comes at a time as researchers rate a proposal to curb ship pollution in the Arctic, weakened to suit Russian interests, would delay meaningful action until the end of the decade.

In February 2020, the IMO and its member states developed a draft regulation prohibiting the use and carriage as fuel of heavy fuel oil by ships in the Arctic.

Under draft plans being negotiated at the International Maritime Organisation (IMO), the UN body responsible for international shipping, restrictions on heavy fuel oil would only come into effect in July 2024. 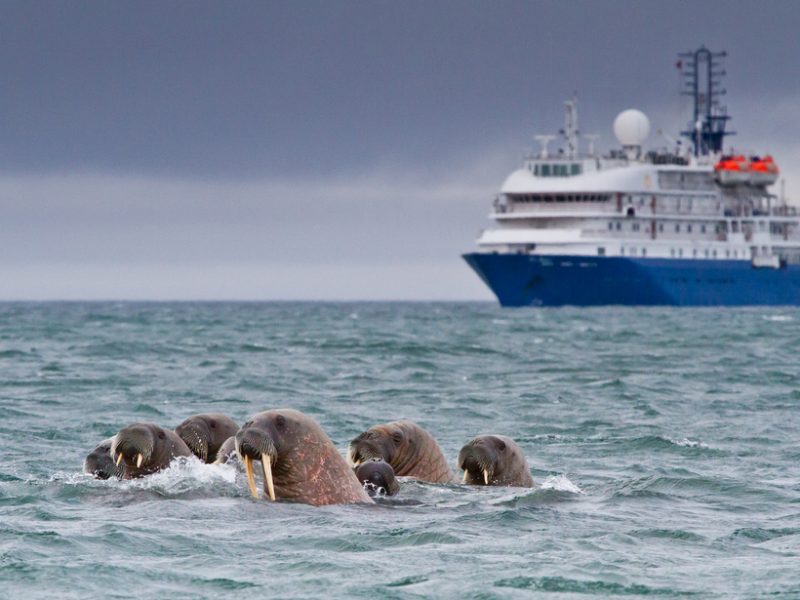 But a host of exemptions would allow most ships using and carrying HFO to continue to pollute Arctic waters until 2029.

A recent study, published in September by the International Council on Clean Transportation (ICCT), estimated that if the draft ban had been in place in 2019, around three-quarters of the fleet using HFO would have still been allowed in the Arctic.

According to the findings, the regulation will only reduce the use of HFOs by 16% and the carriage of HFO as a fuel by 30% when it takes effect in July 2024. Overall, it will allow 74% of Arctic shipping to continue with business as usual, the ICCT said.

As the Arctic fleet grows, so will the number of ships that qualify for an exemption, “and the effectiveness of the ban would be further eroded,” the researchers warned.

Reacting to the announcement by the Norwegian government, the Clean Arctic Alliance, an  international pressure group, welcomed the “important commitment” taken by Norway. The alliance calls on IMO member states to agree a stronger ban on HFOs in the Arctic region ahead of its November meeting.

“If the IMO’s Arctic HFO ban is approved as currently drafted, it will expose the Arctic to even greater risks associated with HFO throughout the 2020s,” warned Sian Prior, lead advisor at the Clean Arctic Alliance.

“Norway’s commitment to protect the waters and environment of Svalbard must serve as the impetus for greater ambition from Arctic states to agree to a stronger and effective ban on this dirty shipping fuel throughout the Arctic,” Prior said.