Carlos Tavares, Chairman of managing board of French carmaker group PSA Peugeot Citroen, speaks at the presentation of the 2016 annual results of the French auto makers, in Paris, France, 23 February 2017. [EPA/CHRISTOPHE PETIT TESSON]

Carlos Tavares, the CEO of French carmaker Groupe PSA, warned that the ongoing shift to petrol vehicles threatens to knock the EU off course in its efforts to cut CO2 emissions.

Diesel is far dirtier than petrol in terms of pollutants such as NOx and particulate matter. But European carmakers also point out that CO2 emissions from petrol cars are measurably higher.

“The rapid decline of diesel’s share in EU markets…poses serious challenges for meeting CO2 reduction targets – not only those for 2030, but also the targets already set for 2021,” warned Tavares, whose PSA Groupe owns brands such as Peugeot, Citroën, Opel and Vauxhaul.

Demand for diesel cars is falling fast, fuelled by concerns about air pollution and the Dieselgate scandal involving German carmaker Volkswagen. Provisional estimates from ACEA put the figure for 2017 at 44% of the passenger car fleet in western Europe, down eleven percentage points since 2011.

Tim Armstrong, in charge of global automotive research and analysis at UK-based consultancy IHS Markit, suggested this share would continue to fall.

Fewer than two out of every five new cars would be running on diesel by 2020, and the figure was set to fall below 32% by 2025, he said in a presentation. In some countries, the fall has already been precipitous, with registrations of diesel cars and vans falling over six years from almost three-in-four to below 50% last year in Italy and France.

However, a lack of charging infrastructure means Europe is nowhere near ready to solve the problem through a widespread uptake of electric vehicles, Tavares told reporters in Brussels.

According to the ACEA president, the European Commission’s recent proposal to cut CO2 emissions limits by 30% between 2021 and 2030 went well beyond what was agreed under the EU’s climate and energy framework to meet Europe’s commitments under the Paris Agreement on climate change.

“It puts the global competitiveness of the European auto industry at risk,” Tavares warned, saying the automotive sector was “still trying to understand the rationale” behind the European Commission’s ‘clean mobility package’.

Moreover, the interim 2025 target of a 15% reduction did not give the car industry time to make the necessary technical changes. Reaching any future CO2 target will strongly depend on much higher sales of alternatively powered vehicles, Tavares said.

“We believe the current CO2 proposal is not fully technology neutral…and effectively pushes for pure battery electric vehicles,” he argued.

The ACEA president repeatedly returned to the issue of consumer choice, saying a lack of infrastructure meant carmakers had no confidence in finding a market for electric vehicles, even if they were to manufacture them in significant numbers.

“Either we don’t sell those vehicles, we don’t meet the CO2 objectives, and we have huge penalties which puts our companies in stress. Or we need to push those vehicles into the market with a significant level of incentives, which means margins become thin or negative, and this means our companies need to restructure,” Tavares said, making repeated references to the 12.6 million jobs in the EU that depend directly or indirectly on car manufacturing.

The ball, Tavares said, is now in the court of EU and national lawmakers, who need to convince consumers by investing up front in “the right level of charging network density”.

Recent political decisions by EU lawmakers, however, have cast a degree of doubt on their appetite for backing a politically driven and, presumably, state funded roll-out.

Government delegates and MEPs agreed in December on a revision of the Energy Performance of Buildings Directive, which watered down European Commission proposals that would have required a charging point for at least every tenth parking space at all new, or newly renovated, commercial and residential buildings.

The EU executive reckoned its plans would have created 3.1 of 8 million such fill-up needed to help decarbonise the transport sector.

With insufficient availability of electric vehicles, the decline in popularity of diesel cars is pushing up demand for petrol powered models. And with their image tarnished by the dieselgate scandal, diesels cars are now subject to a flurry of moves by legislators to more effectively limit their noxious emissions and, in some cases, ban them entirely. 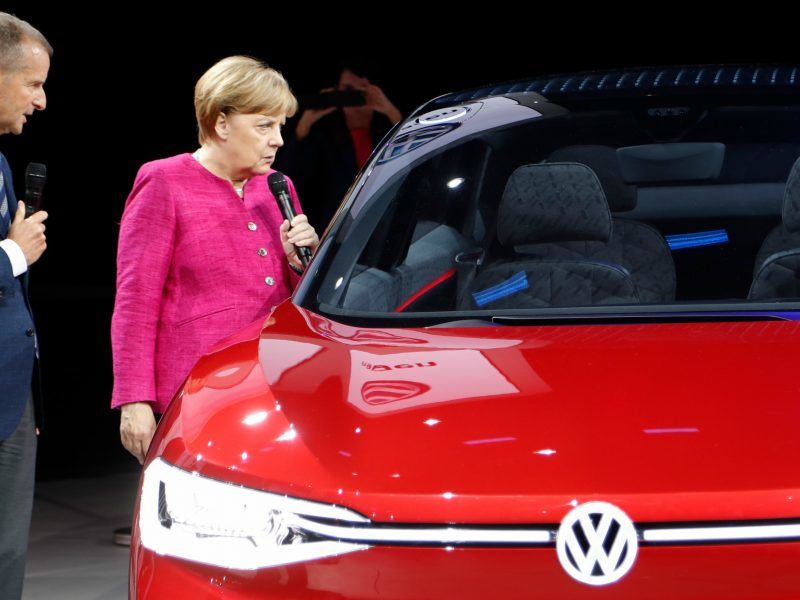 The switch to petrol cars indeed puts an added strain on the EU’s climate goals. But it is also challenged by a rise in popularity for heavier vehicles.

A 3.4% rise in sales in Europe last year saw the sector inch towards pre-crisis levels, with some of 15 million new cars purchased in 2017. But there was also an increase in the sale of supersized ‘sports utility’ vehicles, or SUVs.

“You have a reduction in diesel as one shift, then you’ve got the rise of SUVs, so that increases CO2,” Armstrong told EURACTIV. “All I’m saying is that in 2016 and 2017 the combination of these factors meant the reduction was not very large,” he added.

The analyst said the figures served to illustrate the fact that a number of factors are at play. And there is a challenge to CO2 reduction efforts that is “partly influenced” by a move away from diesel.

“CO2 will trend down, and you’ll see who wins and loses, but ultimately, it has not reversed because of this – it’s just another factor,” Armstrong said.