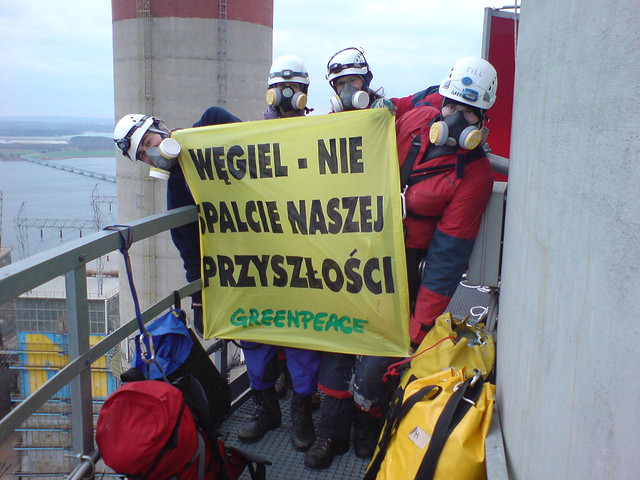 Billions of euros from the sale of EU carbon credits and free emissions allowances, given in exchange for commitments to diversify Poland’s energy mix, will instead be spent on coal and cutting the country’s budget deficit, climate campaigners have said.

The allegations, by Greenpeace, the WWF and the Climate Action Network, were made in a report ahead of October’s summit of EU leaders in Brussels and put the spotlight on Polish Prime Minister Donald Tusk’s patchy record on climate change.

The summit could be the last time that Tusk represents Poland in international energy negotiations before he takes over as President of the European Council in December, a role in which he must broker consensus among member states.

EU leaders will aim to reach agreement on carbon emissions targets for 2030 and inform the EU’s position at the 2015 United Nations Climate Change Conference in Paris.

In January, Tusk opposed the weakened EU proposal for a binding 40% CO2 cut, a 27% share of renewables in Europe’s energy mix, and 30% improvement in energy wastage.

The report said existing EU mechanisms did not contribute to decarbonisation and energy diversification, despite political commitments to ensure they did.

Emissions allowances can be sold on the financial markets. A 2009 review of the Emissions Trading System’ (ETS) Directive decided that 10% of all auctioned emissions allowances would be distributed to poorer member states, including Poland – the “solidarity mechanism”.

The Kyoto bonus mechanism rewarded member states cutting their emissions with another 2% of auctioned allowances.

Assuming an average €10 carbon price between 2013 and 2020, Poland stands to receive €3 billion in solidarity and Kyoto payments.

The report said it plans to use the money to cut its budget deficit. That is against the ETS Directives recommendations, which call for half of revenues to go to fighting climate change.

It is also contrary to the political agreement by member states on the 2020 climate and energy package.

As part of that package, free emissions allowances for electricity producers were offered to Poland, under the little known 10c derogation in the EU Emissions Trading System (ETS).

By allowing Poland to grant free allowances, the European Commission hoped to boost low carbon investment. Article 10c investments should be aimed at ensuring the derogation is not needed in the future.

The offer was made in return for promises to invest in the modernisation and diversification of the energy mix. Crucially the agreement was not legally binding,

A transfer of about €7.5billion worth of free emissions allowances for electricity producers over the 2013 to 2019 period will be spent mostly on Poland’s dominant coal industry, the report found. 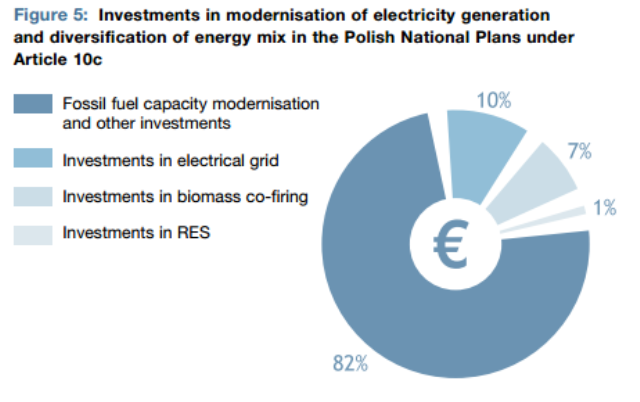 A 2012 EURACTIV investigation exposed that at least one of the coal plants for which Poland was requesting €7 billion of free carbon allowances under the 10c derogation did not exist.

Poland had applied for €33-million worth of free allowances for the ??czna coal plant, near the Ukrainian border, but there was no visible evidence that any construction work has begun at the sleepy greenfield site.

Earlier this month, a senior European Commission official told euractiv.fr that Tusk’s selection as European Council President was a “challenge for climate change negotiations” because Poland has systematically tried to hold back EU climate policy.

The European Commission today (18 September) said it had taken note of the report.

The decision to bolster Poland’s dominant coal industry at the expense of other energy sources and to cut the country’s deficit budget rather than invest in cleaner energy was made under Tusk’s watch.

Tusk will take over as council president at a time when the EU’s dependence on Russian energy is high on the political agenda.

“If the billions in free carbon allowances and other exemptions had been used as they were intended,  ?Poland could by now have kick-started a viable clean energy?sector,” said Joris den Blanken, EU climate policy director at Greenpeace Europe.

“Instead, the allowances have supported the use of coal and done almost nothing to reduce Poland’s dependence on Russian energy imports.”

Tusk has called for an energy union to reduce the EU’s addiction to Russian gas.

Last April, Tusk said the EU should pay up to 75% of the bill for the gas infrastructure needed to be able to create an efficient network, including pipelines and interconnectors between member states.

He also advocated more effective mechanisms of “gas solidarity” in the event of crisis in deliveries and common purchasing of gas from outside suppliers.

Tusk hosted the 19th UN Climate Change Conference in 2013, amid widespread criticism of his country’s record on climate change.

He changed his minister for the environment in the middle of the conference, appointing Maciej Grabowski, an economist and backer of shale gas extraction.

Grabowski announced in June that around 60 exploratory shale gas wells had been dug in Poland, which is in the forefront of European exploration for shale.

With a turnover of some €90 billion in 2010, the EU's Emissions Trading System is the world's largest carbon market.

It aims to force companies to invest in low-carbon technologies by setting a CO2 cap and then allocating or selling firms allowances to pollute. The most efficient companies can then sell unused allowances or bank them.

The ETS’s ‘10c derogation’ allows newer EU member states – mostly from the former eastern bloc – to claim exemptions from power plants which were planned and whose investment process was ‘physically initiated’ before the ETS came into effect.

It outlines what is necessary to ensure that the target is achieved and proposes a binding 40% CO2 cut, a 27% share of renewables in Europe’s energy mix, and 30% improvement in energy wastage by 2030. EU leaders will discuss that target this October.