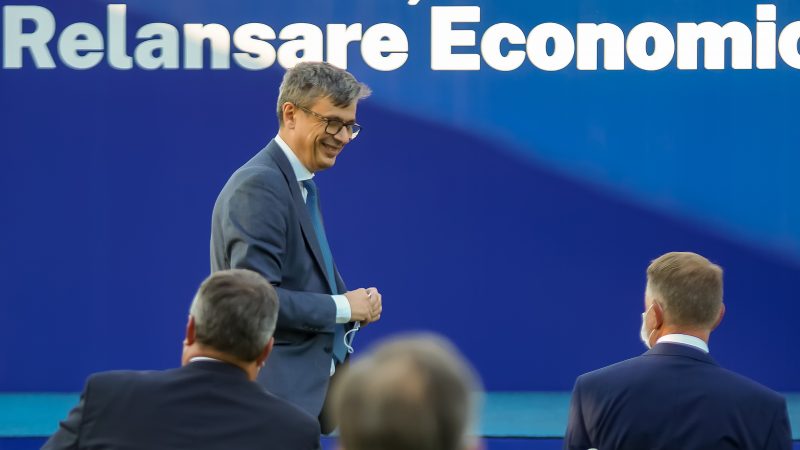 Virgil Popescu in Bucharest on 1 July 2020, while he was economy minister. [LCV / Shutterstock]

Romania could become almost energy independent when Romgaz and OMV Petrom extract the first barrels of natural gas from the Black Sea, according to energy minister Virgil Popescu.

An investment decision is yet to be taken, but Popescu is optimistic that gas will start flowing in five years, with a capacity of 10 billion cubic meters (bcm) per year.

“If the investment decision is made next year, as I want it to be made, judging by discussions we had with Romgaz and OMV Petrom, the investments would take four to five years and we will start extracting gas in 2026,” Popescu told EURACTIV in an interview.

Romanian state-owned natural gas company Romgaz will take over the participation held by US company ExxonMobil in the Neptun Deep perimeter, which holds gas reserves estimated at about 100 billion cubic meters.

The transaction needs to be vetted by the country’s Supreme Council of National Defense and the National Agency for Mineral Resources, but Popescu hopes it will be approved in the first months of 2022.

Production in the gas extraction zone could reach 10 bcm per year, according to estimates, almost sufficient to cover Romania’s entire annual gas consumption of 12 bcm.

Romgaz and OMV Petrom are not the only energy companies investing in the area. Black Sea Oil and Gas, a rival company, is about to start production in another perimeter.

Gas extraction was initially expected to start this year, but some works were delayed, the minister explained. “I think they will start pumping gas in the first quarter of next year… One billion cubic meters will be produced, around 8-9% of Romania’s annual consumption,” said Virgil  Popescu.

Both the minister and investors in the field say Romania has the opportunity to become the main offshore gas producer in the EU. But for the investments to start, changes to the offshore legislation are needed, the investors say.

Popescu is optimistic these legislative changes will be adopted quickly. “We are discussing the amendment of the offshore legislation in the (governing) coalition. We will soon present the changes in the Parliament,” he said.

Both Black Sea Oil & Gas and Petrom said changes to offshore legislation were essential to continue their investment in the Black Sea.

“Black Sea gas is strategic for Romania and we have seen the commitment of the Romanian authorities to amend it by the end of the year. Any delay in amending the law puts pressure on the project, threatens Romania’s energy security and leads to an increase in gas imports,” she warned.

But it will take longer for Black Sea gas to significantly influence local gas markets. For now, gas prices will remain high, according to Virgil Popescu, who doesn’t expect a decline to occur before the end of the winter season.

Romania is one of the member states that is pushing for the EU to recognise nuclear energy and natural gas as transition investments on the path towards climate neutrality by 2050.

Popescu said he was optimistic that both nuclear and gas will be included in the EU’s green finance taxonomy. But even a negative decision will not change Romania’s plans to invest in natural gas, he added.

In fact, plans to restructure Romania’s coal power sector have been under discussion for years, the minister said. The coal phase-out talks are based on the EU’s Modernisation Fund, a tool launched by the EU to finance the energy transition in the ten lowest-income member states.

However, Romania insists on the inclusion of gas and nuclear energy in the EU’s green finance taxonomy in order to secure those investments.