Ask the director of Rosatom Western Europe about the company’s diversification strategy, and he won’t hesitate a second – it’s all about nuclear.

“We are absolutely looking at diversification because the market is huge,” said Andrey Rozhdestvin, pointing to the “new customers of nuclear in emerging countries”, notably  in Africa, Asia and the Americas.

“They need low-carbon sources of electricity and will be interested in competitive offers to create nuclear infrastructure,” Rozhdestvin told EURACTIV.com during a recent trip to Brussels, citing China and Turkey, where the company plans to start constructing a new $20 billion plant by the end of March.

But ask again and Rozhdestvin will also mention wind, solar power and even batteries.

“We are the leaders in Russia when it comes to the wind industry. And why are we doing that? Because we believe we should diversify and add new CO2-free sources of energy to our portfolio.”

Rosatom decided to invest in wind power only recently, in 2016, believing that rapid cost reductions in the renewable industry will become a competitive threat to nuclear power. Two wind farms in Russia are currently under construction, in partnership with a Dutch company, Lagerwey.

Overall, Rosatom has an order to build 1 gigawatt of wind power capacity in Russia, Rozhdestvin says, a market share which is still tiny compared to the 27.89 gigawatts of installed nuclear capacity.

“But that’s the first step,” Rozhdestvin says. “We have to be a player on that market. Wind, solar, nuclear – they are all CO2 free. We want to be able to offer a diversified portfolio to meet concrete energy needs.”

Solar is a longer shot, Rozhdestvin admits, saying it’s too early to say how much Rosatom will get involved in the future.

“We have competences in polysilicon production and that’s the key to produce solar panels. And we participated in building a plant in China so we have a technological base in the chemical processing aspect. But it’s not enough to be very competitive”.

“Let’s look at wind first and what it can bring.”

The change of tune is significant for a Russian conglomerate whose very name is associated with atomic energy. As world leaders descend on Bonn for the United Nation’s annual climate change summit next week, Rosatom wants to show it can respond to customer demand on the whole range of low-carbon energies.

And the buzzword these days is not just renewables but a key technology that goes hand in hand with the growing electrification of the economy – energy storage, on which Rozhdestvin says Rosatom is working “very heavily”.

Energy storage, the Russian executive claims, “is the way to improve the economics of renewables. And that’s a mix we’d like to offer to our customers”.

“And it’s a game changer, it changes everything”, Rozhdestvin says, borrowing a phrase from the late Apple CEO, Steve Jobs. 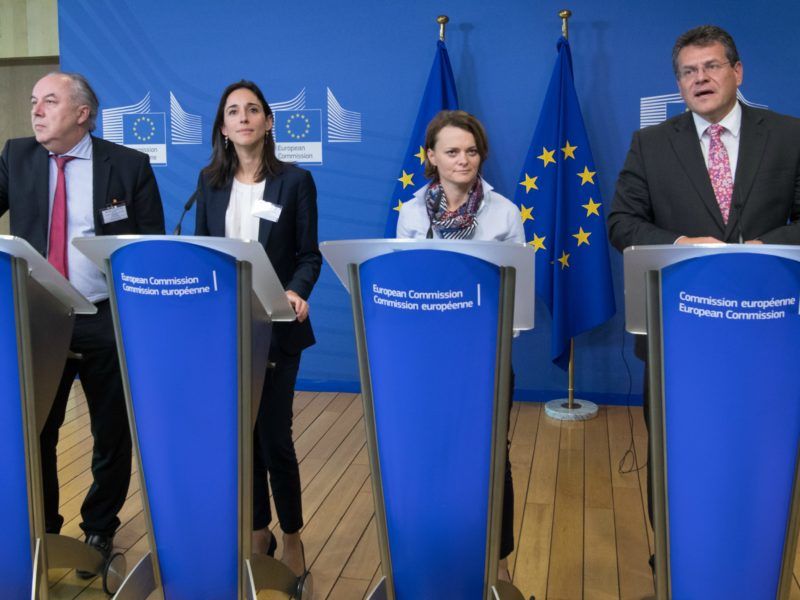 Fading fortunes of nuclear in Europe

Nuclear, however, is never far from Rozhdestvin’s mind. And the fading fortunes of atomic energy in Europe, and France in particular, are a genuine source of worry for him.

Rosatom suffered badly when Germany abruptly decided to phase out nuclear power entirely in the wake of the Fukushima disaster in 2011. So France’s decision to lower the share of nuclear in the country’s energy mix was a further blow for Rosatom, which cooperates with French companies along the whole nuclear value chain.

France currently derives close to 75% of its electricity from nuclear power but the new Ecology Minister Nicolas Hulot aims to bring this to 50% by 2025, meaning “up to 17” reactors could be closed by then.

“It will be very negative for us,” Rozhdestvin admits, saying the move “will impact Rosatom directly and indirectly” because of the close cooperation Rosatom has with French companies such as Areva, EDF, Engie, Schneider Electric and Alstom.

“We’re talking about hundreds of millions per year in cooperation between the French and Russian nuclear industry,” Rozhdestvin says.

In fact, Rosatom believes the deteriorating state of the French nuclear industry will be negative for everyone in the sector, including Russia which could emerge as one of the world’s sole nuclear energy powerhouses as a result, together with China.

According to Jean-Michel Glachant, a professor at the Florence School of Regulation, “the French nuclear industry is financially and technologically ill”, as illustrated by the repeated delays and mounting costs in delivering the new generation of nuclear reactors in Finland, France and Britain.

With nuclear development in France stalled, the sector could only succeed by exporting, Glachant says. But it suffered a major setback six years ago when Areva and EDF lost a bid to construct new nuclear plants in the Middle East.

“We see the difficulties related to the Areva situation, which we feel painfully,” Rozhdestvin concurs, saying Rosatom still places orders with the French company and “will do what’s possible to help the company overcome those difficulties.”

Tie-up or joint venture with France “is an open question”

The Russian executive still believes there is a future for the nuclear industry in France and Europe more widely, however. The technology, he claims, is more mature than renewables, and is well suited to the needs of emerging countries where demand for electricity is growing rapidly.

“France is very strong in exporting energy. And there are opportunities there for nuclear to keep growing,” Rozhdestvin claims, citing new opportunities linked to electric mobility.

“This is why China is going for nuclear – they need technology they can handle and understand. And on the back of nuclear they can then develop renewables,” Rozhdestvin adds. “This is how EDF became so successful – they were able to use nuclear as a baseload and then connect renewables to the grid”.

Looking forward, Rozhdestvin suggests that Russia could make its financial firepower available to a French partner. Considering the heavy investments needed in the nuclear industry, this would make a rapprochement with a French energy firm more likely.

“A tie-up or a joint venture is an open question because we have to identify the core technologies that we’re going to need,” Rozhdestvin says. “There is no joint venture but we work together very intensively in the field of R&D because it’s such a complicated subject. And I think future cooperation will come from that part.”

“We need the best intellectual resources. We’re currently deploying the third generation of nuclear reactors with the EPR in France and VVER in Russia. But the fourth generation of fast reactors is coming. And then the future is ITER, which tries to replicate the fusion taking place in the sun.”

By then, the transformation of the French nuclear industry might have reached a point of no return, Glachant suggests. According to the French academic, one of the ways for Paris to close the file could be to separate EDF into two entities – an old and a new one, “exactly like E.ON or RWE did in Germany”.

“The government will then have full tranquillity to let Areva and the former EDF slowly pass away,” he says, with the new EDF keeping hold of renewable energies.