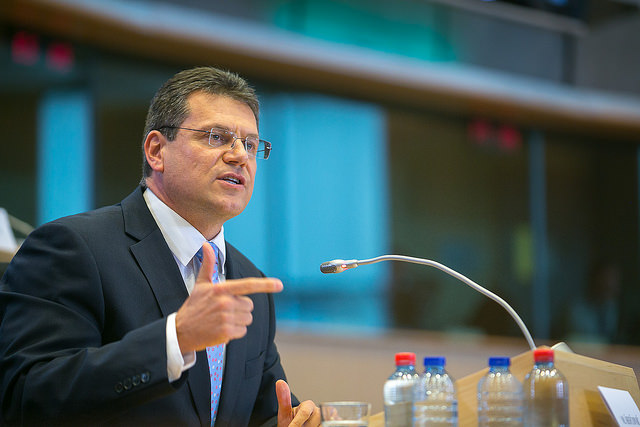 Further details about the European Commission’s plans for Energy Union emerged Wednesday (4 February) after a senior EU advisor predicted the creation of a single European supervisor for energy.

The College of Commissioners discussed the plan for the first time. It is an important part of the Commission’s response to the Ukraine Crisis and climate change.

The adoption of the Energy Union package is scheduled for 25 February. The package will involve an action plan, with an annex of “concrete proposals”, including legislation, decisions and analysis.

The Commission would be “very tough” on member states not transposing any legislation properly or promptly, Vice-President in charge of Energy Union Maroš Šef?ovi?  warned.

On the same day, the executive plans to publish its negotiating positions for the United Nations Climate Change Conference in Paris. The December conference aims to agree on a global, legally-binding target to limit global warming.

The final Energy Union will cut across a number of policy sectors including energy, transport, research and innovation, foreign policy, regional and neighbourhood policy, trade and agriculture, Šef?ovi? told reporters in Brussels.

A total of 14 Commissioners were working closely together to deliver this holistic approach, he said. Energy security, the internal energy market, energy efficiency, renewables, and research and innovation into smart technology were the five pillars of the package, he added.

The Commissioners agreed that it was important to take advantage of lower oil and gas prices to speed up the process so that money saved could be channeled into building energy infrastructure.  Šef?ovi? said EU foreign policy should reflect that the EU was a big customer paying in hard currency that deserved to be treated accordingly.

At an event held by the Union of the Electricity Industry (Eurelectric), Jean-Arnold Vinois said the evolution of an EU-level regulator was both “consequent and logical”.

Vinois is an adviser on European energy policy at Notre Europe – Jacques Delors Institute. He is honorary Commission director of DG Energy. A former advisor to former Energy Commissioner Günther Oettinger, he continues to act occasionally for DG Energy to promote the internal market for energy.

“One day there will be a EU regulator for energy. We’ve seen it with Banking Union – no one would have thought that was possible five years ago,”  he told delegates in a panel debate.

Commission policy officer Tadhg O’Briain, of the Resource Efficiency unit,  said that the Banking Union had evolved in response to the financial crisis.

Energy Union was at least in part a response to threat to gas supply posed by the Ukraine crisis. That exposed the EU’s dependence on Russian gas, an asset the Kremlin has used as a political weapon.

Šef?ovi? said at his press conference there was strong political momentum behind the plan because the EU is dependent on outside imports for more than 53% of the energy it consumes.

“The situation in Ukraine brought it [Energy Union] to the forefront of the political agenda,” he said, “We shouldn’t spend each summer worrying we don’t have a secure energy supply for winter.”

To strengthen the resilience of Eurozone banks to financial shocks, a single supervisory mechanism was created, with the European Central Bank as supervisor.

Whether a single supervisor for energy would be the European Commission, or another body the bestowed with additional powers, such  as the Agency for the Cooperation of Energy Regulators  (ACER), remains to be seen

“Be it ACER or the Commission is up to the member states,” said Vinois. Look at Banking Union and the ECB, he said, any decision would likely be made on a cost-benefit basis.

The European Securities and Markets Authority is an example of a European association of national regulators that evolved into a European supervisor with direct powers. ESMA has direct supervision over credit rating agencies.

Georg Zachmann, a research fellow at the Bruegel think tank, said any future regulator would need a legal mandate and that would be difficult.

ACER would need to be empowered, and equipped with the right tools to monitor the energy market and have a reasoned opinion, he added.

Jean Michel Glachant is director of the Florence School of Regulation. He said he did not foresee ACER getting the role.

But, he added that the Commission taking on the role would “make sense” and be a “good thing.”