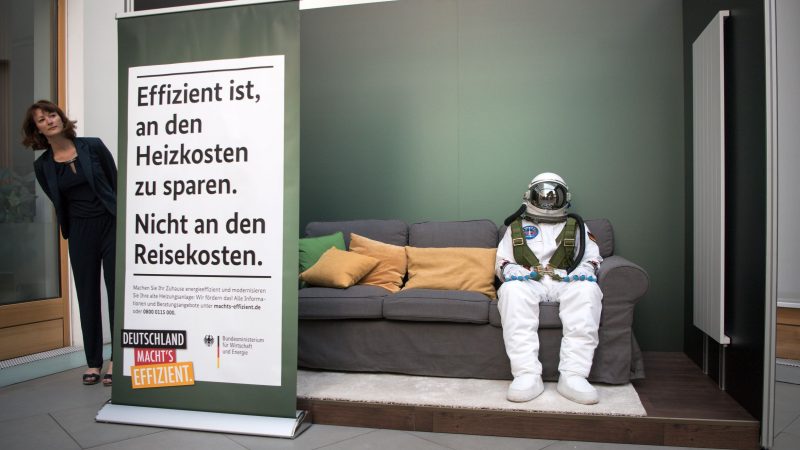 A man dressed as an astronaut sits on a set next to a sign that reads 'It is efficient to save on heating expenses, in Berlin on 12 May 2016. [EPA/BERND VON JUTRCZENKA]

This article is part of our special report COP25: Countries pressed to deliver.

In 2005, unemployment in Germany reached 11.7%. At the end of 2019, the figure more than halved to 5%. This means it is increasingly difficult for companies operating in Germany to find skilled workers and fill vacancies.  And it has an impact on sales revenues, as well as Germany’s and Europe’s ability to achieve carbon neutrality goals.

“Germany is phasing out coal and nuclear energy as well as working towards decarbonising  both  its power and its heating and building sectors,” Bernd Scheithauer, in charge of training at Danfoss’ operating site in Offenbach, explained to EURACTIV.

“Going forward, renewable energies will therefore play a major role, which means we have to change the current, fossil-fuels-based heating systems and adapt to new heating concepts if we really want to tackle energy efficiency and climate change, also in the building sector,” he said.

That implies that companies in the building sector must be able to provide the right expertise for householders so they can adapt to new, raised standards.  “With new energy efficiency standards, they need new efficient and carbon free heating systems and therefore adequate energy counselling,” the heating expert stressed.

A lack of skilled workers, however, could limit the opportunity to turn the energy transition into a successful “heat transition”, he added.

On top of that, demands are changing: modern buildings with efficient carbon free heat generators such as heat pumps that are part of an energy management system in a smart home demand different skills. For example, the future installer will also need to deal with electronics and digitalisation.

Yet, a study of building energy renovation activities released by the European Commission on Monday (9 December) shows that half of all installers across Europe already dealing with energy renovations report energy efficiency measures being too complicated to install. “This certainly also hampers quality and signals a high need for capacity building,” the report stresses.

But the right tradespeople are increasingly difficult to recruit: the housing sector is currently booming in Germany, a situation that forces companies like Danfoss to compete against one another to hire them.

They are not the only ones. Whether large corporate groups, medium-sized companies, the famous Mittelstand, or start-ups – companies of almost all sizes suffer from the shortage of skilled workers. There is a lack of qualified personnel in around 400 business segments, economic research institute Institut für deutsche Wirtschaft (IW)  has found.

Demography is one reason behind the shortage, it explained. In an ageing society, the number of trainees is quickly decreasing.

But school-leavers are also no longer attracted to join Germany’s famous dual training scheme and instead choose academic careers, the economic institute also finds. According to IW, there were about 600,000 trainees in the year 2000, but by 2017 it fell to only 365,000.

Trainees in the German dual system typically spend part of each week at a vocational school and the other part at a company. Dual training usually lasts two to three-and-a-half years.

Given the lack of skilled workers, Danfoss set up its own training schemes where they are trained to not only improve their skills but also to be able to provide the right expertise, as no such expertise is yet available in Germany, Bernd Scheithauer explained.

“It is still pretty much centered on products and not on services,” he underlined. “We do face-to-face training and provide webinars. We focus on small learning units that last about 45 minutes and focus on specific topics.”

“The idea is to propose a package of these course units with the aim at unlocking a learning process. What we are trying to do is train our employees to go beyond the sole business case of selling products for them to be able to provide the right expertise,” he stressed.

The heating expert said there are numerous governmental fundings in the housing sector, but they all focus on building renovation, changing heat source or the development of new products and not on education and training.

He called on the German government to drastically increase the number of energy advisers – there are approximately 5,000 of them in Germany right now – and to adapt their training to the new energy environment.

“We have between 18 and 20 million single and two-family houses in Germany. Who will they ask to do the renovation? The most familiar figure, the heating installer, not the energy adviser. And the heating installer will change the heating, and that’s about it. But what we need is a lot more than just replacing old boilers.”

Skilled workers shortage has an economic impact on companies in Germany as they find themselves unable to unlock market potential. “We are not able to generate revenues as much as we could. We could earn more money,” Scheithauer said.

“If nothing happens on the training front at the government level, this will turn out to be a really big problem,” he continued. “And I am quite pessimistic, I don’t think things will change in the next 10 years.”

He said that significant investments are now on hold because of the current political uncertainty,

“We don’t know where we are really heading,” he said, pointing out at the 100,000 or so lost jobs in the German wind and solar energy branches because of decisions taken over the past 15 years. “This number stands in contradiction to the 20,000 jobs in the coal industry. There is no correlation,” he said.