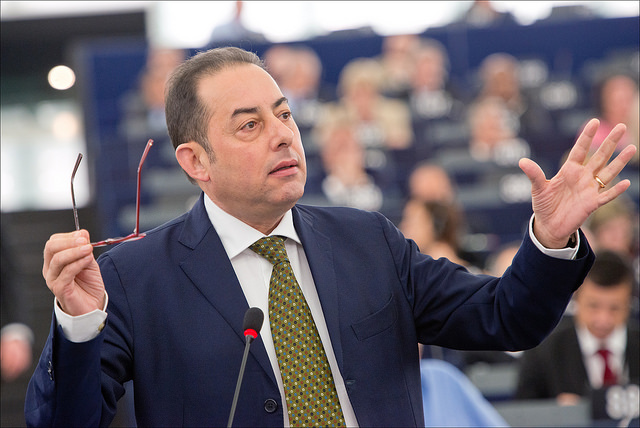 SPECIAL REPORT: The leader of the second largest group in the European Parliament has told EURACTIV his Socialists and Democrats will push to strengthen building renovation rules in EU energy efficiency law.

While the funding was agreed in principle last year, it is regularly reviewed. Cre?u’s support is significant, especially after EU leaders watered down 2030 efficiency targets at their October summit.

“The new 2014-2020 programming period regional policy will help member states with significantly increased investments in energy and the shift to a low-carbon economy, in particular by boosting energy efficiency in buildings,” she said.

Before May’s European elections, the Renovate Europe campaign secured the signatures of Cre?u, then a MEP, and Gianni Pittella, the president of the S&D Group, and 78 other MEPs for its pledge to stop energy waste in buildings.

The pledge sets a target for 2050 of an 80% reduction of building energy demand in EU. It also stresses that while the technology exists to achieve that, the legislative and regulatory framework is lacking.

Gianni Pittella, the president of the S&D Group, said the 27% non-binding efficiency target agreed by EU leaders at the October European Council was “staggeringly weak”.

The goal was set as part of an agreed EU package of climate and energy targets for 2030. The European Commission had proposed a 30% target without specifying whether it should be legally binding or not.

Critics have warned the watered down target robs investors of much needed certainty and could drive them to leave the EU in favour of other markets.

“[It] is below the minimum binding 30% which Commission President Jean-Claude Juncker said was needed in order for Europe to be credible,” said Pittella.

“So we will push for a revision of the Energy Efficiency Directive to strengthen its provisions, in particular on the renovation of public buildings, and the need for the right incentives to be provided for renovation of private buildings,” he added.

In a significant victory for the Renovate Europe campaign, Pittella said his group would put in “put in place a roadmap to achieve an 80% reduction in the EU’s building stock energy demand by 2050.”

There is expectation that Juncker could revise relevant EU law in light of the European Council conclusions to ensure the targets are hit.

If he doesn’t, the S&D and potential allies in the Parliament could increase the pressure on the executive to do so.

“We now need to be pushing hard and making the clear business case for investing in higher energy efficiency, in particular by renovating the Europe’s building stock,” she said.

Her ALDE colleague Morten Helveg Petersen, writing for EURACTIV, said, “The work must start now to build an alliance of MEPs from across the house to deliver change, whilst reminding President Juncker and his new team of the commitments they made during their confirmation hearings.

“A missed opportunity to create millions of jobs, whilst tackling climate change, would not just be irresponsible, it would be unforgivable,” he said.

Peterson, who also signed the Renovate Europe pledge, said the Parliament would have the chance to review the poor implementation of the Energy Efficiency Directive.

The European Union’s Energy Efficiency Directive in late 2012 was expected to trigger the largest revamp of Europe’s existing building stock to date and set new standards for public procurement and energy audits.

But research earlier this week showed that some member states were not complying with the directive’s requirements.

Pittella said the S&D Group had secured the inclusion of a requirement for member states to publish national renovation strategies during the directive’s passing into EU law.

Unfortunately, analysis by the Buildings Performance Institute Europe found that out of a sample of ten submitted strategies, just four complied with the directive. Six member states had missed the deadline to publish their strategy.

“We also supported a 3% annual renovation target for all public buildings, but unfortunately the more regressive groups in the European Parliament combined with the Council to vastly limit this to only central government buildings,” said Pittella.

The “regressive groups” include the European People’s Party, the largest group in the European Parliament, and the European Conservatives and Reformists. The ECR has no MEPs signed up to the pledge.

14 EPP MEPs signed up for the Renovate Europe pledge. Their names can be found here. The EPP did not respond to EURACTIV’s request for comment yesterday (4 November).

Philippe Lamberts is co-president of the European Greens and the European Free Alliance. He blasted the 2030 summit as a “big failure” that would “really take the steam” out of investment in building renovation.

“The lack of binding targets in term of efficiency and renewables is one of the greatest mistakes the heads of state and government have ever made,” he said.

While conceding it was too early to judge the new Commission, Lamberts does not think that it will legislate to make the 2030 efficiency targets binding.

Vice-President Frans Timmermans was appointed to deliver a clear mandate of less regulation. In that context, it was unlikely the executive would go against EU leaders’ express wishes, according to Lamberts.

In terms of the Parliament’s ability to strengthen environmental legislation, Lamberts was sceptical.

“What we could see in the last Parliament was that the majority of MEPs [the EPP] wrongly saw any binding target related to the environment as a handicap to growth,” he said.

“Is the new Parliament likely to be more progressive than the old one? I am always prepared to be surprised but I am a realist,” he added.

Lamberts said, “We can achieve nothing unless we have a willing minority between the EU institutions, and strong pressure from the outside.”

While some industry voices had backed strong efficiency targets, other companies and associations such as BusinessEurope had not.

“We need external support,” said Lamberts said. “We can only obtain results through public pressure.”

The Renovate Europe campaign says that, thanks to modern technology, buildings' energy demands can be cut by 80%. But, it adds, in order for that to happen, there needs to be an effective regulatory and legislative framework in place.  Today (November 5) Is Renovate Europe Day.