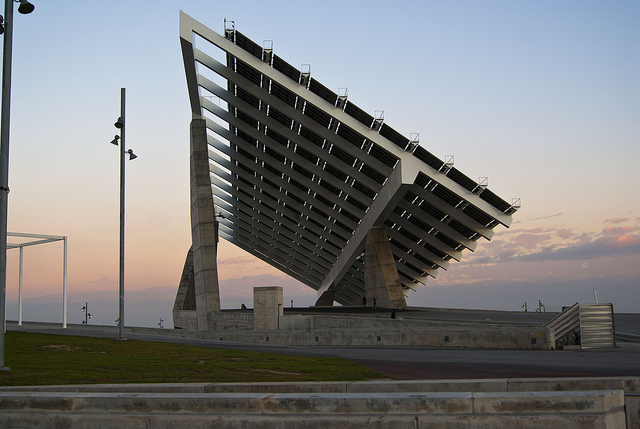 But high-risk premiums or bad regulation can increase the costs of plants by half, according to research by the Fraunhofer Institute for Solar Energy Systems.

The cost of producing solar power in central and southern Europe will have dropped to between €0.04 and €0.06 per kilowatt hour by 2025, the study found. The report, commissioned by NGO Agora Energiewende, revealed that cost would plummet to between two to four cents by 2050.

The research only used “conservative assumptions” about possible future technological breakthroughs in solar, and did not factor in innovations that could make electricity cheaper either.

Solar photovoltaic energy has only been granted a very limited role in the EU, due to its high cost when compare to other low-carbon sources, Agora Energiewende said.

But, the NGO said, the study showed that solar panels could compete with coal and gas, which are seen as cheaper.

That meant that solar could play an important and financially viable role in reducing the EU’s energy dependence and in hitting its climate and energy targets for both 2020 and 2030 – central goals of the new Energy Union.

“The study shows that solar energy has become cheaper much more quickly than most experts had predicted and will continue to do so, “said Dr Patrick Graichen, Agora Energiewende director, said.

“Plans for future power supply systems should therefore be revised worldwide. Until now, most of them only anticipate a small share of solar power in the mix.”

The high cost of photovoltaic installations means that electricity generation costs were highly dependent on financial and regulatory conditions, the study found.

High-risk premiums reflected in interest rates or a bad regulatory environment could hike up the cost of solar plants by 50%. The effect is so dramatic that it could offset any advantage given by greater amounts of sunshine, according to the report.

“Favourable financing conditions and stable legal frameworks are therefore vital conditions for cheap, clean solar electricity. It is up to policymakers to create and maintain these conditions,” said Graichen.

Renewable energy is perceived as expensive by EU policymakers. A leaked draft of the EU’s plans for Energy Union, said that the cost of integrating renewable electricity into the internal energy market had to be lowered through the development of new infrastructure.

Market-based schemes were needed to ensure the “cost-effectiveness” of renewables, according to the draft.

Energy and Climate Action Commissioner Miguel Cañete told EURACTIV this month that the new Energy Union would be built on public money, and be attractive to private investment through risk guarantees.

While that could encourage investors to back more solar, there is still uncertainty. That was caused by many EU governments, notably Spain, retroactively cutting public subsidies to renewable energy in the wake of the financial crisis.

The European Commission’s overhaul of the EU electricity market as part of the Energy Union will target national public support for renewables, according to documents seen by EURACTIV.

Claude Turmes, a Green MEP from Luxembourg, said the EU, governments and local authorities should embrace the report’s findings.  They should build a fully renewable, decentralised and balanced Energy and Climate Union, he said.

“Solar photovoltaic has already achieved impressive costs reductions and will continue in this direction. This should be better reflected in European Commission’s energy scenario modelling and Roadmap for the Energy Union,” he added.

The proposed Energy Union, set to be launched tomorrow (25 February), is the EU’s response to the Russian threat to its gas supplies. The majority of Russian gas imports to the EU, about 30% of its annual needs, goes through Ukraine. In 2009, Russia turned off the taps, causing shortages in the EU.

The EU imports more than half of its energy, a situation that could be improved through more domestic power generation, according to the Energy Union draft communication.

Plans for the Energy Union have also developed beyond questions of security of supply to encompass issues such as fighting climate change. The Commission sees Energy Union as one method of hitting the 2030 decarbonisation targets agreed by EU leaders at a summit last October.

At the same time as the Energy Union launch, it will publish a strategy paper for December’s UN Climate Change Conference in Paris which aims to set a worldwide legally binding target for global warming.

3 responses to “Solar could be cheaper than coal and gas by 2025, study says”