A screenshot from the bTV report. [Georgi Gotev]

Dozens of Bulgarian workers building the Interconnector Greece-Bulgaria (IGB, also known as Stara Zagora-Komotini pipeline) protested on Thursday (6 August) in Haskovo, Bulgaria. The workers say they have not been paid for the last three months and threaten to quit their jobs if they do not receive their salaries immediately.

The Gas Interconnector Greece – Bulgaria is in line with the joint EU strategy for market-based security of supply. It is linked to the Southern Gas Corridor – a Commission-supported initiative which aims to reduce Europe’s dependency on Russian gas and to add diverse sources of energy supply.

Despite the progressing construction, the wages of the Bulgarian workers building the gas pipeline have not been paid.

“Each month we work for 300 hours, given that the normal amount of work hours per month is 160. We work overtime. We work every Saturday, even sometimes on Sundays”, one IGB worker told the Bulgarian National Radio.

Another protester said he has been working on the project for half a year, but has not received any money for the past three months. Salaries are clearly not very high as the protesters claim their employer owns them 2,050 euros for three months of work.

It was later announced that workers’ June salaries will be paid the same day (6 August), while the remaining amount would be paid at the beginning of next week.

A protester said on bTV channel that the situation was “humiliating”, because the Greek workers doing the same work had been paid on time.

A week ago, Bulgarian Prime Minister Boyko Borissov personally inspected the construction of the Stara Zagora-Haskovo-Komotini gas pipeline. During his visit, Borissov explained that without his government, the project “will stall and stop”. Borissov is under popular pressure to resign over allegations of corruption. 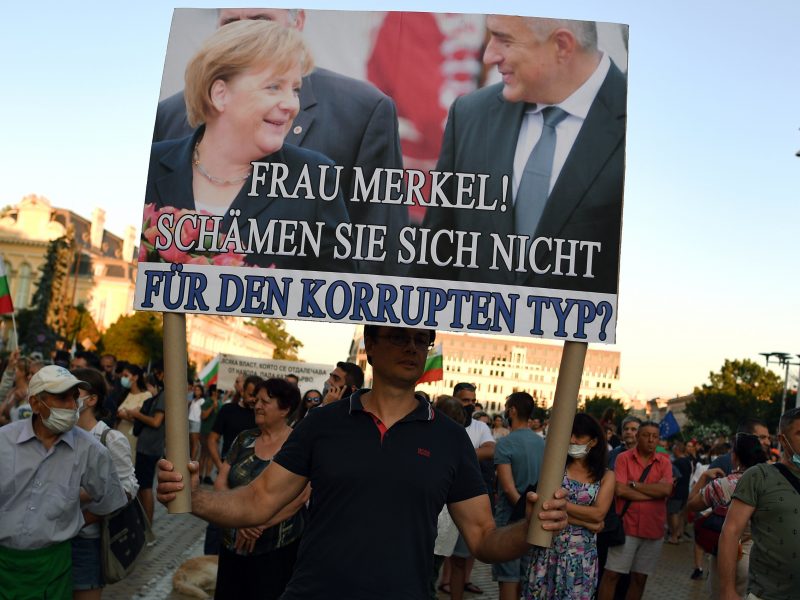 The budget for the construction of the gas interconnector is €240 million and the construction contract was signed on October 10th last year. €110 million out of those €240 million was awarded as a loan by the European Investment Bank (EIB). Nearly €39 million is provided by the Bulgarian Operational Programme Innovation and Competitiveness, and €45 million was awarded as a grant by the European Commission in 2010.

The IGB project should be completed by the end of 2020. The entire route of the Greece-Bulgaria interconnector is 181 km. Bulgaria is counting on receiving liquefied natural gas (LNG), including US LNG imports, which will be unloaded at the floating LNG Terminal in Alexandroupolis, Northern Greece.

Two weeks ago EURACTIV Bulgaria learned from foreign diplomatic sources that the state-owned company Bulgarian Energy Holding (BEH) has blocked the bank guarantee issue under the strategic contract for IGB.

On 22 July EURACTIV asked Energy Minister Petkova to comment. She didn’t deny there was a problem, but said it would be solved quickly. The head of BEH Zhaklen Cohen didn’t answer his mobile phone.

Sources said that the Russian “fifth column” in Bulgaria will try to create problems to the alternative gas supply routes as long as they can.