Aldona Todoran ended up being the face of the programme. She was presented to the public by the communications department of the Ministry for Energy as the prime example of a former coal worker who successfully reconverted as a wind power technician. [Picture: Ștefan Voicu]

A professional reconversion scheme for coal workers that was once billed as Romania’s most ambitious green jobs programme to date has fallen into disarray one year after its launch following the recent change of government.

When it was inaugurated last year, the training programme brought new hope to Romania’s Jiu Valley. The region faces economic and social difficulty after more than 20 years of industrial decline caused by the slow demise of the coal industry. Around 90% of jobs there have been lost and people have struggled to adapt to the new economic reality.

The aim of the ‘Wind Power academy’ was to train 5,000 miners over 10 years, offering the prospect of new jobs in a booming industry.

But one year into the scheme, and in the absence of renewed funding or political support from the government, only one person from Jiu Valley has graduated from the academy and now works in the wind industry. 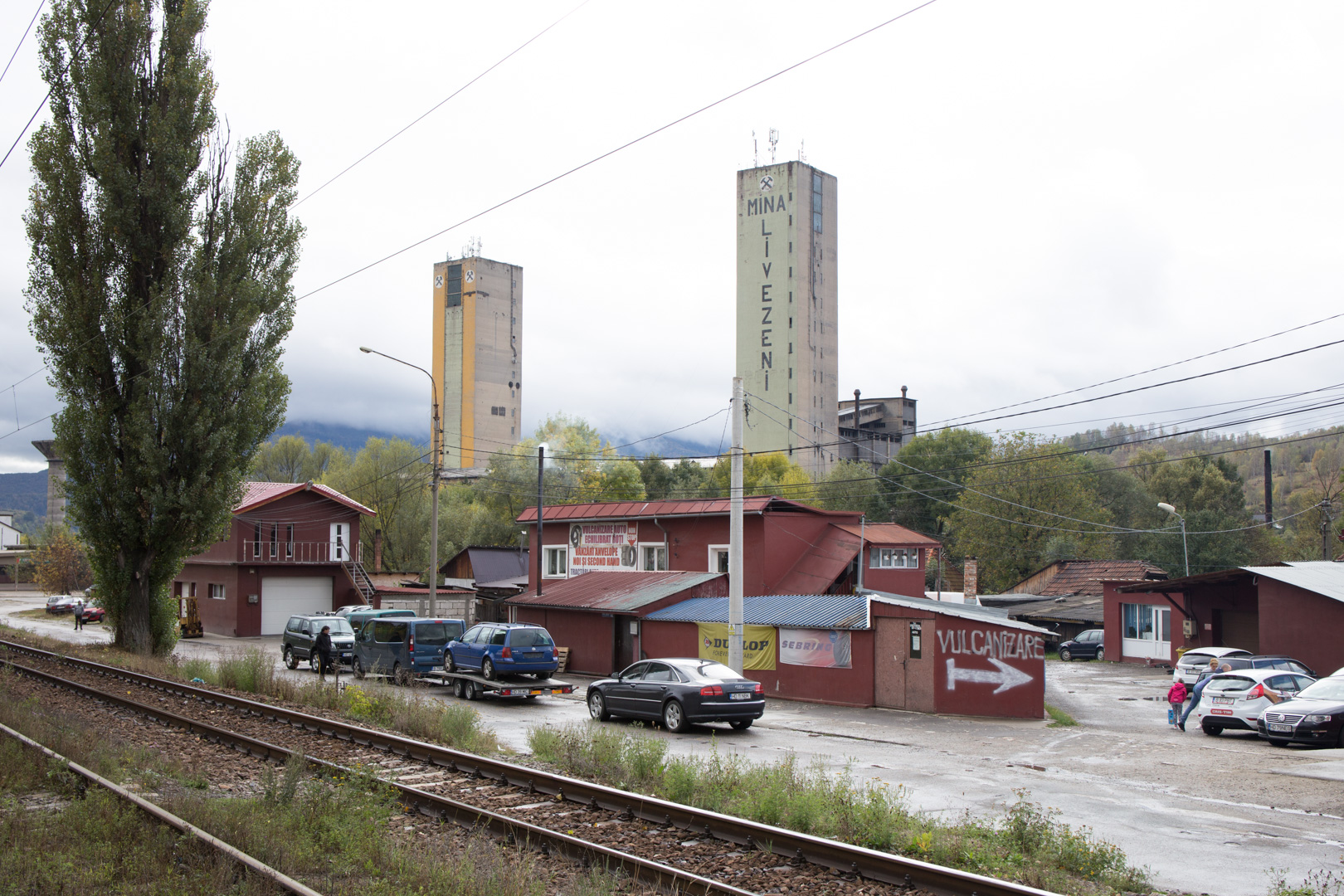 The “Academy for Training and Professional Reconversion for Renewable Sources and Distribution of Electricity” first emerged from the offices of the Romanian Wind Energy Association and was launched in May 2019 by Romania’s then energy minister as part of the country’s energy transition effort.

The partners of the programme – the Ministry of Energy, the Romanian Wind Energy Association (RWEA), Monsson Operations, CEZ, Enel, and the University of Petroșani – signed a memorandum and began laying the groundwork for what was billed as Romania’s most ambitious professional reconversion project to date.

Dozens of miners or former miners applied for the programme, worried that they would lose their jobs once the remaining mines close down and hoping for employment in the renewable energy sector.

Aldona Todoran was one of the first to apply. Now 49, she worked for more than twenty years as an engineer in the underground mine of Paroșeni but decided to leave the mine in 2017 because of the deteriorating working conditions there. The announcement of the professional reconversion programme came at the right time for her, after a year spent looking for work.

Todoran ended up being the face of the programme. She was presented to the public by the communications department of the Ministry for Energy as the perfect example of a former coal worker who successfully retrained as a wind power technician. Photos of her face covered in coal or standing up on a wind turbine with her arms stretched started circulating in the media. 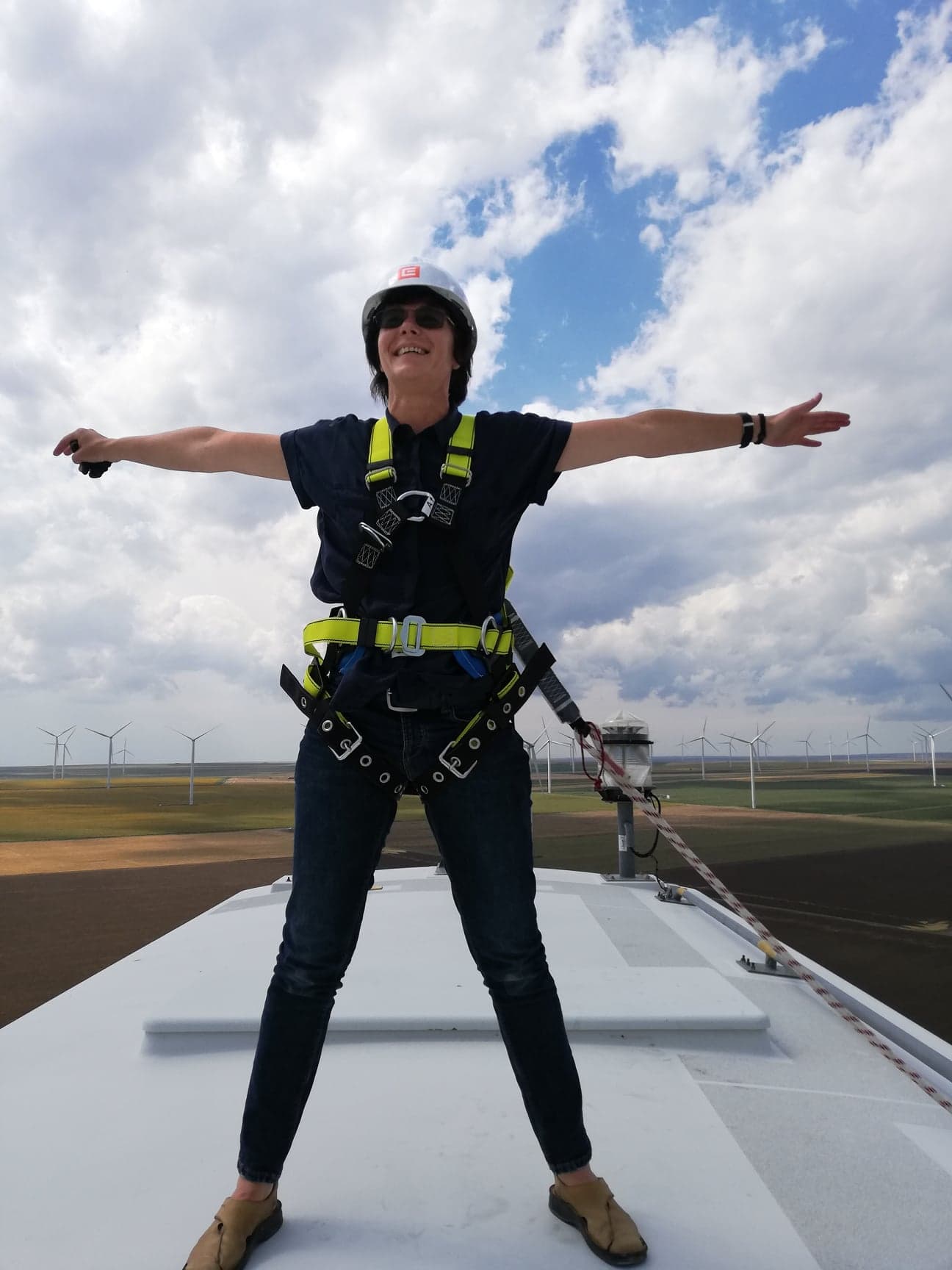 “At first, I was suspicious about the programme, having been used to empty promises in Jiu Valley,” Todoran says. “But when I saw their enthusiasm and how many people were involved in the reconversion of those who leave the mining system, I started believing more in this project,” she told EURACTIV.

The first round of interviews was attended by 50-70 people. However, some of the candidates never heard back from the interviewers afterwards.

Monsson Operations, the company responsible for the selection, later described the interviews as mere “focus-groups” aimed at sounding out interest from the local community and making preparations for designing the future “wind power academy”.

While awaiting a response from the promoters of the programme, Aldona took a job as a distributor for a medical equipment company. But her dream was to jump from the coal industry to the wind power sector, a leap forward that would take her 604 km away from Jiu Valley to the Cogealac wind park in Dobrogea, Romania.

After several weeks, Monsson Operations finally organised a first field trip to the Cogealac wind farm for seven miners during the summer of 2019. Interest grew and 47 miners participated in a second field trip.

Then, Monsson representatives conducted interviews with dozens of miners and former miners in Jiu Valley. The concept was to employ people for at least two years, working a few weeks at home and a few weeks on location, in order to avoid relocating people permanently.

An important criterion for the selected candidates was to be young and have a slim body, said Mihael Melczer, an adviser at the Ministry of Energy who brought the project to the ministry and contributed to its launch.

A former director at the Hunedoara complex in Jiu Valley, Melczer took the job at the ministry when the region was already part of the EU Platform for Coal Regions in Transition, an initiative launched by the European Commission.

“Nobody did anything about it,” Melczer said. “Various people in the government were going to Brussels to make an appearance, collected the per diem and that was it. Romania did not present any project”. 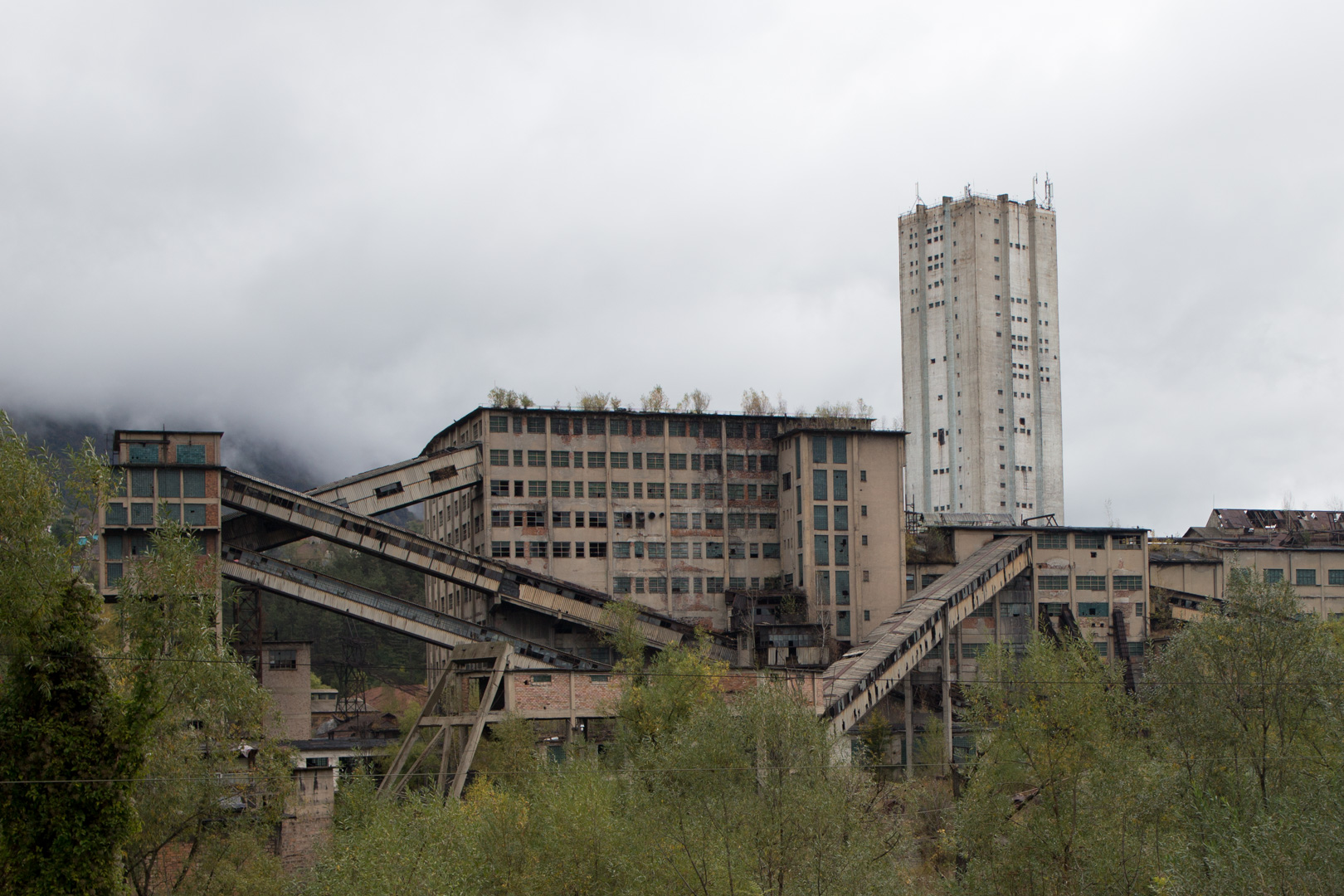 Politicians then lost interest in the programme. After the fall of the socialist-led government in November 2019, the energy minister was replaced, and Melczer returned to his tourism business in Jiu Valley.

As is often the case when governments change, the new cabinet led by the liberals did not continue the policy launched by their predecessors.

With no political backing, the ‘wind power academy’ was abandoned, Melczer said.

But some ideas die hard, and chances are the project could be revived again. Adrian Borotea, manager at Czech energy utility CEZ and board member of RWEA, said companies in the wind power industry have conducted promising talks with the new minister of energy and will probably sign a new memorandum soon.

If the government renews its backing, the partners say they could secure EU financing that will be made available at the end of this year or beginning of 2021.

Sebastian Enache, Monsson representative and board member of RWEA, said they decided to go ahead with a pilot project financed from their own pocket. As the whole process costs €10,000 per person, a slimmed-down version of the project was the only possible option until European funds start flowing in, he explained.

The winning candidate was 26-year-old Ștefan Birchi from Jiu Valley, who was working at a wind farm in Sweden before he was interviewed in April 2020. Enache said the main criteria for selecting candidates was English proficiency, as future wind power technicians would be required to work in various different countries.

Birchi was the first person to be offered an employment contract as part of the project. He studied electrical engineering in Timișoara but didn’t find a job in the area after graduating, so he took several short-term jobs in Jiu Valley and abroad.

He even worked at the mine for three months, despite objections from his father, who was an underground miner.

The 26-year-old said he was excited to be selected for a job in the wind power industry and now plans to move permanently to Constanța, 604 km away from Jiu Valley, to be closer to Romania’s largest wind farm.

As for Aldona, she changed jobs and worked temporarily as a ski instructor during the winter of 2019. She has not heard back from the “academy” and is even thinking about going back to the mine. “You don’t have many options around here,” she told EURACTIV. 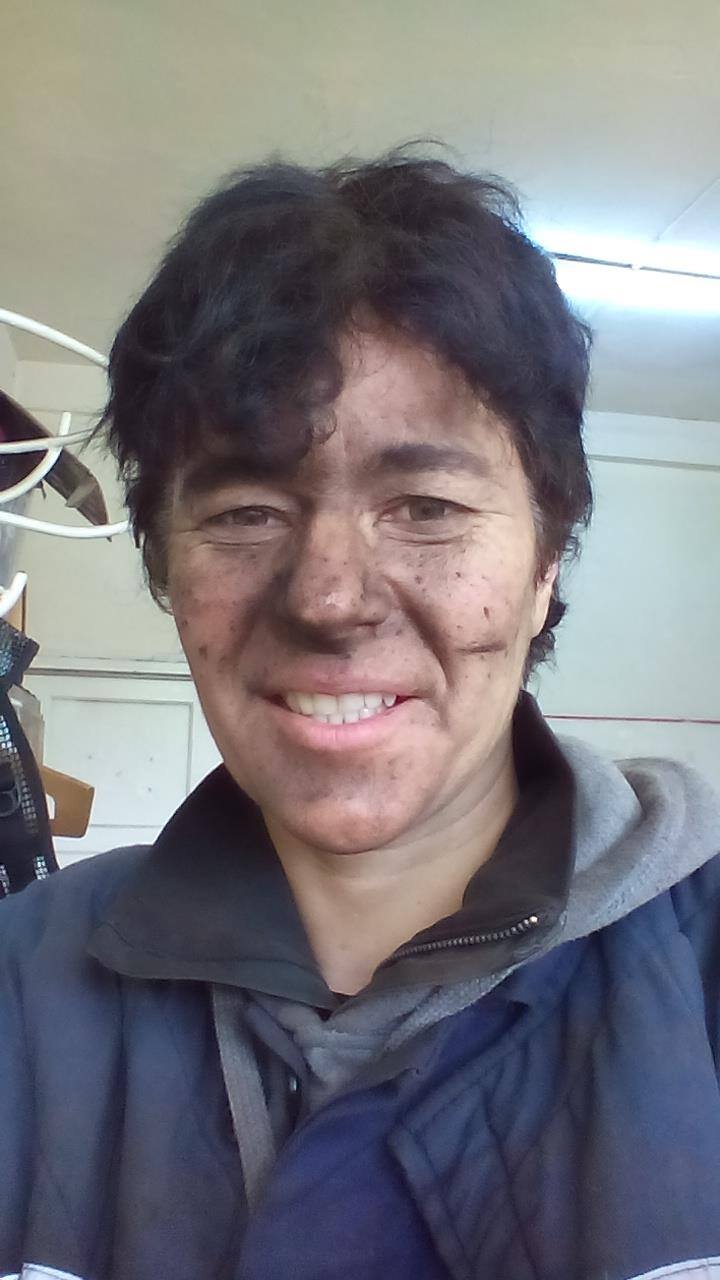 For former coal workers like Aldona, the initial enthusiasm about the ‘wind power academy’ has turned to disillusion – a feeling that is widespread in Jiu Valley, where miners have witnessed the slow decline of the coal industry over the years.

Wind industry representatives, meanwhile, say they learned a lessons from their experience in Jiu Valley.

While some miners were excited about new employment opportunities, they found that many of them were reluctant to abandon their jobs and families to make a new start, far away from home.

Some even blamed the renewables industry for the decline of coal and openly showed their mistrust of wind power companies. At worst, some of the miners were described as “spoiled” employees keen to cash in on benefits.

About the author: Roxana Bucată is an environmental journalist based in Bucharest, Romania. She documented this story as part of her master’s thesis at the Central European University where she studied Environmental Sciences and Policy. Her work was recently featured in Balkan Insight, an online news outlet.