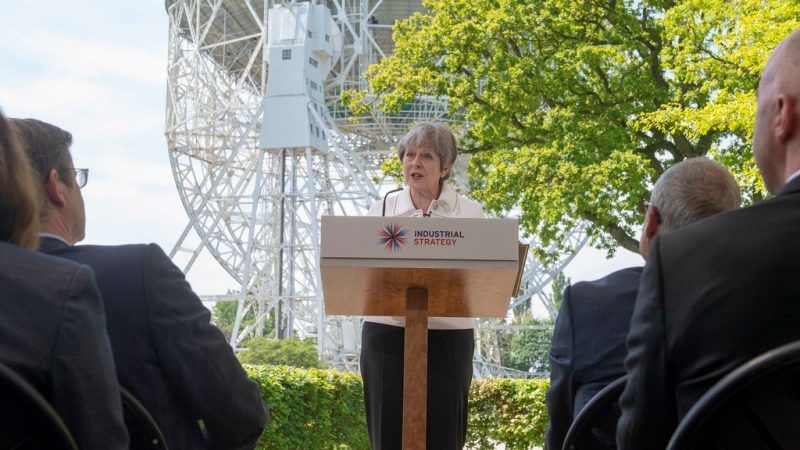 Theresa May outlined the UK government's modern Industrial Strategy on 21 May. [Number 10 / Flickr]

UK Prime Minister Theresa May vowed to halve energy use from new buildings by 2030, as part of a speech that championed the role science and technology will play in delivering her government’s industrial strategy. EURACTIV’s media partner edie.net reports.

Appearing at the Jodrell Bank observatory complex in Cheshire on Monday (21 May), the Prime Minister challenged the construction industry to embrace innovation and deliver higher standards to meet the new 2030 target, which will also reduce household energy bills and help with national carbon targets, according to May.

“We are at the forefront of scientific invention because we embrace change and use regulation not to stifle but to stimulate an environment for creativity,” May said in a speech. “Meeting this challenge will drive innovation and higher standards in the construction sector, helping it to meet our ambitious homebuilding targets and providing more jobs and opportunity to millions of workers across the country.

“We will use new technologies and modern construction practices to at least halve the energy usage of new buildings by 2030. By making our buildings more energy efficient and embracing smart technologies, we can slash household energy bills, reduce demand for energy, and meet our targets for carbon reduction.”

As part of the “clean growth and grand challenge mission”, the UK Government will also aim to halve the energy costs for the existing building stock – both domestically and commercially. Heat and power for buildings currently account for 40% of national energy usage.

May noted that the Industrial Strategy would act as a “catalyst for new technologies” that could then be exported to a “global market for clean technologies”.

Commenting on the announcement, the UK Green Building Council’s (UKGBC) Julie Hirigoyen said: “Addressing the energy used in new and existing buildings will be central to delivering clean growth and can only be achieved with strong leadership from Government working in close partnership with the industry.

“Now this mission has been set, it will be vital to underpin it with clear and consistent policies. Government should set a trajectory for building regulations to achieve net zero carbon from 2030, as well as introducing long-term incentives for retrofitting homes and commercial buildings. These market signals will be key in driving investment and innovation in the supply chain to meet these challenges and get us on track to meeting the Paris Agreement.”

The Prime Minister’s speech outlined several ambitions related to the Industrial Strategy, including championing Artificial Intelligence (AI) and data, and the previously-announced plan to be a global leader in manufacturing zero-emission and electric vehicles (EVs).

May also claimed that she wanted the UK to continue to pay for access to nuclear safety and research programmes such as Euratom and the scientific research fund and innovation platform Horizon 2020.

May’s announcement arrives at a time of continued progress for sustainability ambitions in the construction sector. In November, the Government struck an agreement with the construction industry to halve emissions in the built environment over the next eight years.

edie’s own Sector Insight report found that almost two-thirds of businesses operating in the construction industry are now more committed to taking action on sustainability than they were 12 months ago.

The report combines survey results with an array of key industry facts and stats, drip-fed sustainability success stories and best-practice case studies from the industry. Download the report here.