Timeline: The gas war between Russia and the West 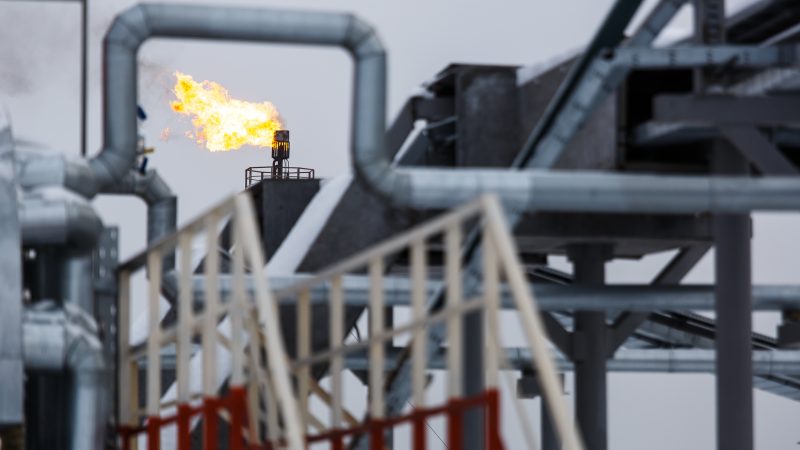 Natural gas has emerged as a weapon of war between Russia and Europe since Moscow’s February 24 invasion of Ukraine.

Here is how the standoff developed:

Energy prices surged in Autumn 2021 as tight gas supplies collided with strong demand in economies recovering from the COVID-19 pandemic.

Poland accused Russia of engineering the crisis by keeping deliveries to Europe deliberately tight. Gas stores in Europe are at unusually low levels, in particular those owned by Russian export monopoly Gazprom.

On 13 October, the European Commission presents a “toolbox” of measures EU countries can take to alleviate the pressure in the short and the long term.

On 22 February 2022, German Chancellor Olaf Scholz says he is suspending the Nord Stream 2 pipeline project with Russia in response to Moscow’s recognition of two breakaway regions in Ukraine.

The project has long been a source of tension with Berlin’s allies in the United States and Europe, who worry it would increase Germany’s energy dependence on Russia.

Ukraine also fears it will lose revenues from gas transit if Nord Stream 2, which would deliver Russian gas to Germany via the Baltic Sea, goes ahead.

On March 2, the European Union cuts seven Russian banks off from the SWIFT banking transfer system.

But it spares two major lenders with strong ties to the energy sector, reflecting the dependence of several EU states on Russian gas, notably Germany, Italy, Austria and Hungary.

EU response and US embargo

On 8 March, the European Commission outlines proposals to reduce the EU’s dependence on Russian gas by two thirds before the end of 2022 as part of a plan to become independent from all Russian fossil fuels “well before 2030”.

On 23 March, Russian President Vladimir Putin bans European gas customers from paying their bills in dollars and euros, in response to the freezing of some $300 billion in currency reserves held by Russia overseas.

He announces that Moscow will now only accept payment in rubles from “unfriendly” countries, including EU nations.

The European Commission warns EU members that by paying in rubles they would be violating international sanctions against Moscow.

The United States and the EU discuss alternative sources. Washington agrees to provide Europe with an extra 15 billion cubic metres of liquified natural gas this year.

She says the two EU and NATO members are now receiving gas from their EU neighbours.

On 18 May, the European Commission presents its €300 billion REPowerEU plan to eliminate Russian energy imports by 2027. The plan has three major elements: energy savings, boosting renewables, and diversifying European supplies of oil and gas.

On 21 May, Russia cuts gas to neighbouring Finland, which has refused to pay in rubles and angered Moscow by asking to join NATO.

The Netherlands and Denmark are also cut off after refusing to pay in rubles.

On 30 May, EU leaders agree to stop most Russian oil imports by the end of the year, but put off a ban on Russian gas.

Citing a technical problem, Gazprom reduces deliveries by 40 percent, then another 33 percent, in the run-up to a June 23-24 EU summit which is expected to grant Ukraine membership candidate status.

On 23 June, Germany moves closer to rationing gas, raising its supplies alert level to the second of three stages.

Other EU members also look for ways to offset their dwindling gas supplies, either by finding new suppliers or switching to alternative energy sources.