The Energy Union is a strategy to cut the bloc’s dependence on energy imports, which cost €400 billion a year, and fight climate change. The twin goals can both be met with greater energy efficiency, which reduces demand and cuts emissions.

The European Commission, under the direction of Energy Union chief Maroš Šefčovič, has vowed to put “energy efficiency first” in its plans.  EU officials pinpointed building renovation as a priority for the strategy and reiterated that commitment in November’s Clean Energy for all Europeans communication in November last year.

75% of the EU’s building stock is inefficient and buildings account for 40% of the EU’s primary energy demand.

Energy efficient renovation can give a fillip to the economy through local jobs, increase house prices, and cut household bills.

Increasing the life and value of public buildings through renovation should also be attractive to municipalities but, despite the multiple benefits, such as reducing energy poverty, renovation rates in the EU are just 1% a year.

Ironically, in the next five years, there could be more progress in getting self-driving cars on the road than taking advantage of efficiency technology that already exists.

A major obstacle to getting renovation rates higher is access to finance, which is an issue for both businesses and households.

This week’s special report will examine private and public sources of capital for energy efficient renovation, look at the role of EU policymakers and some of the benefits driving efficiency investment.

Investment gap but who pays?

Private investment in energy-efficient buildings renovation must increase five-fold by 2030, according to a group set up by the European Commission and the United Nations Environment Programme (UNEP) Finance Initiative.

The Energy Efficiency Financial Institutions Group (EEFIG) has called for a “historic level of public-private collaboration” to bridge the funding gap for energy savings projects.

For most homeowners, a house is their single largest investment. The European Mortgage Federation is pushing out an EU-wide scheme to make green mortgages more available.

Homeowners will qualify for reduced repayment on their mortgages if they undertake energy efficiency renovations, and lower interest rates on loans to pay for them.

Research shows that homeowners carrying out such renovations are less likely to default, and borrowers will be rewarded with a lower risk profile and less monthly payments.

The “pioneering” plans, first revealed by euractiv.com in June last year, are now being rolled out.

Triados Bank, which has branches in the Netherlands, Belgium, Germany, Spain and the UK, will reduce interest rates on existing loans if building energy performance improves.  At the time of writing, interest rates are 1.7% with energy label A, 1.8% with B, 1.9% with C and so on.

ING has also launched building renovation loan scheme worth up to €50,000 at 1.95% over ten years.

But the only way to get renovation rates across the EU higher is to unlock the capital held by institutional investors such as pension funds and insurance funds.

There is growing interest from these investors in energy efficiency project. They recognise the potential of a long-term, low-risk project with stable returns.

After the landmark success of the United Nations’ Paris Agreement on climate change, members of funds are increasing pressure on investors to find green projects.

Danish Pension Fund PKA has set a target of investing €3.5 billion, 10% of their €35 billion capital, into efficiency and renewables by 2020.

PKA is chairing the Institutional Investors Group on Climate Change, a forum for collaboration on climate change between investors. IIGCC members represent €18 trillion in potential investment.

EURACTIV understands PKA is pushing for other funds to match their 10% target, which could unlock 1.8 trillion of additional funding for energy efficiency investment.

But institutional investors traditionally back larger projects, such as infrastructure.  Renovating individual buildings would be too small an investment.

Finding methods to aggregate a number or pool of smaller projects into a large investment opportunity will make it easier to raise finance.

Public money can be used to de-risk such pools through loan guarantees. Such guarantees can incentivise much larger amounts of private capital.

The European Commission’s Smart Finance for Smart Buildings initiative and the flagship Juncker Investment Plan are examples of such public-private partnerships.

The Smart Finance initiative can unlock an extra €10 billion of public and private funds by 2020 through new project aggregation mechanisms and efficiency financing platforms.

Those platforms will help bring added investment from the European Structural Investment Funds and the European Fund for Strategic Investment, which is the mechanism for the Juncker Plan. 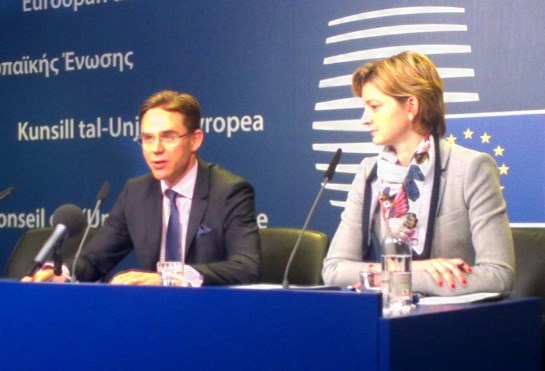 SPECIAL REPORT / The European Union will not ring-fence funds from the Juncker plan to pay for renovation projects to boost the energy efficiency of buildings, the Commission Vice-President in charge of the €315 billion investment package told EURACTIV yesterday (9 March).

The Commission is pushing for a binding 30% efficiency target in the revisions to the draft Energy Efficiency Directive.

That is more than the 27% goal set by EU leaders in 2014, but the executive argues that the ratification of the landmark Paris Agreement on climate change last year justifies the increase.

The European Parliament has repeatedly called for a 40% target, which the Commission says would be too costly. MEPs and national diplomats must agree to an identical target before it can become EU law.

Member states are divided on whether to back 27%, a non-binding 30% or a binding 30% target.  Malta, which holds the rotating Presidency of the EU, hopes to agree the Council’s position before the end of June.

The European Council for Energy Efficiency (ECEE) is a non-profit with more than 75 member organisations including national regulators, environmental NGOs and industries.

It argues that a higher 2030 target would bring huge benefits, as well as giving investors the certainty they need to back efficiency projects.

According to ECEE, an increase to 30% from 27% would significantly cut air pollution. This could prevent 30,000 premature deaths across the EU.  Increasing the target to the 40% backed by MEPs would, according to Commission research, save about 200,000 lives and cut health and pollution control costs by up to €41 billion per year.

The ECEE estimates that a 30% target would double building renovation rates, while 40% would triple them, provided

The EU has a target of cutting greenhouse gas emissions by at least 40%, compared to 1990 levels, by 2030. That commitment is the cornerstone of its pledge to the Paris Agreement, which aims to cap global warming at two degrees above pre-industrial levels, with an aspirational 1.5-degree goal.

The influential International Energy Agency estimates that half of the global emissions cut needed to stay below two degrees must come from energy efficiency.

“By adopting ambitious, binding legislation, decision-makers will cut risks and costs, and open the gates for many billions of euros of investment in Europe.”

The European Commission is also revising the Energy Performance in Buildings Directive, which compels member states to have long-term renovation strategies, and buildings to have certificates on their energy efficiency.

The Renovate Europe campaign says that thanks to modern technology, buildings' energy demands can be cut by 80%. But, it adds, in order for that to happen, there needs to be an effective regulatory and legislative framework in place.

The EU’s Energy Union strategy has the twin goals of fighting climate change and boosting energy security - but could it also build healthier homes for European citizens?