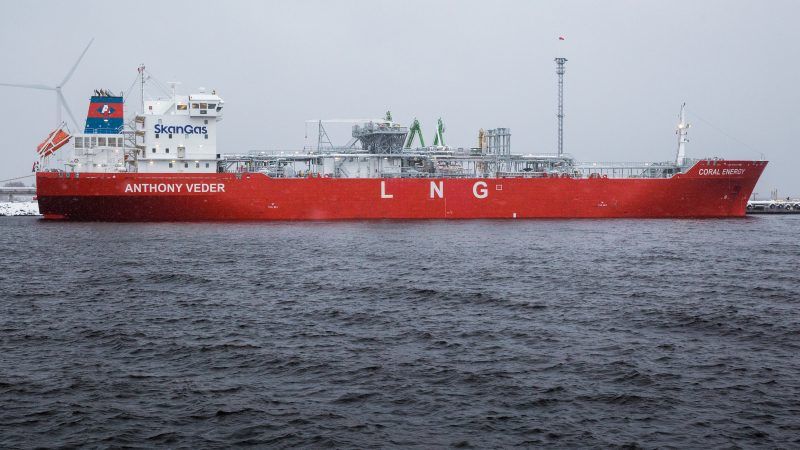 In a White House press conference with Italian Prime Minister Giuseppe Conte late on Monday, Trump said part of the US-EU trade talks sought to expand America’s reach into the continent’s gas markets which were awash with Russian supply.

Trump Says E.U. Will Build 9-11 Terminals To Buy LNG From U.S. https://t.co/6AeYosIfOr via @southfronteng Let's see about that

“And we are already talking to the European Union about building anywhere from 9 to 11 ports, which they will pay for, so that we can ship our LNG over to various parts of Europe,” he said.

Responding to Trump’s latest statements, the European Commission told Reuters on Tuesday that bilateral talks helped cement €278 million ($325 million) in EU funding earmarked for LNG import projects in Croatia, Greece and Cyprus. They are due onstream between 2018 and 2020.

But the projects under consideration for EU funds pre-date the Trump administration and most of them are being developed by private companies over which politicians have limited sway.

On top of that, three-quarters of Europe’s existing LNG import capacity lies idle and the new terminals being mulled in niche markets such as Croatia, Greece and Cyprus represent a fraction of the continent’s overall capacity.

Croatia’s plans have been dogged by delays for at least a decade and the east Mediterranean’s rich gas deposits offer a potential alternative to LNG for Cyprus.

The EU is supporting 14 LNG infrastructure projects in total which could increase import capacity by 15 billion cubic meters (Bcm) of gas by 2021, compared to the continent’s existing 210 Bcm LNG import capacity.

However, the 14 infrastructure projects are not all LNG import terminals. Some are pipelines linking terminals to inland centers of demand.

Europe has little need for US LNG now as Russian piped gas surges into the continent’s gas markets at a record pace.

“In 2017 the average utilization of these terminals was 26% – leaving ample margin for more imports from the US if competitively priced,” the Commission said.

Yet competitive pricing is the biggest problem facing US LNG in Europe. The most lucrative markets for US LNG are in South and Central America, India and the Far East, with Europe near the bottom of the list given its relatively low prices and ample supplies from Russia and Norway.

This could change dramatically though as American output soars in coming years and as domestic production from the North Sea and Norway shrinks, leaving a growing gap to be filled by external suppliers.

In a showdown, most analysts believe Russia can undercut US LNG but in practice the producer has avoided flooding the EU by selling its gas below market prices, opting instead to achieve the best return.

There are limits to the growth of Russian gas in Europe.

But plans to build new routes into Europe, such as Nord Stream 2, face stiff political opposition which could constrain its longer-term growth.

At a NATO summit this month, Trump said Germany was “captive” to Russia for backing an expanded gas import corridor along the Baltic seabed, known as Nord Stream II, into the country’s north east.