The volume of gas transported along the Southern Gas Corridor (SGC) may be increased thanks to gas from Turkmenistan, Azerbaijan’s Energy Minister Parviz Shahbazov said in an interview with the Trend agency published on Tuesday (8 May).

Turkmenistan is one of the countries with the richest gas reserves in the world, but it is located on the “wrong” side of the Caspian Sea, which has prevented it from exporting its energy resources to Europe.

“The SGC initiated by Azerbaijani President Ilham Aliyev with the involvement of new exporters, transit countries and consumers, has the prospect of expansion in Eastern and Central Europe, including the Balkans,” Shabhazov was quoted as saying.

He added that in the future, SGC can increase its capacity thanks to new gas sources in Azerbaijan, including gas from Turkmenistan.

Azerbaijan is getting near to bringing gas to the EU via the EU-supported SGC. The $40 billion, 3,500-km chain of pipelines is a step towards curbing Russia’s one-third share of Europe’s natural gas market.

SGC consists of three pipelines: The South Caucasus pipeline extension via Azerbaijan and Georgia, the Trans Anatolian Pipeline [TANAP] across the Turkish territory and the Trans Adriatic Pipeline (TAP) crossing Greece and Albania to reach Italy.

The source of gas is the Shah Deniz 2 offshore gas field in Azerbaijan’s economic zone in the Caspian Sea. The first molecules of gas are expected to start flowing to the EU in 2020. 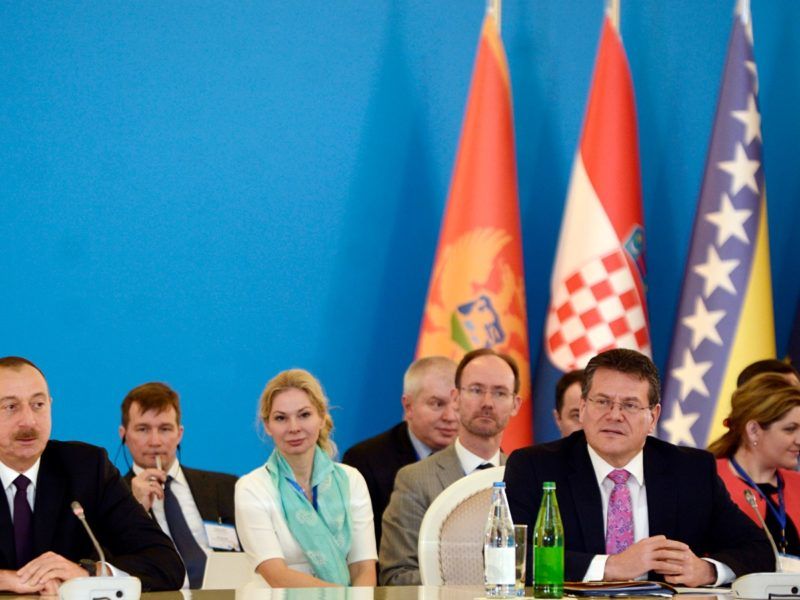 According to press reports, Turkmenistan could become a player in the EU gas market via gas swaps with Iran. Because of economic challenges, Turkmenistan has been seeking to find more buyers, other than China, for its natural gas riches.

Hamidreza Araqi, managing director of National Iranian Gas Company, was quoted as telling the Iranian press that Turkmenistan was hoping to strike more swap deals to supply Azerbaijan and Armenia with up to 15 million cubic meters of gas daily via Iranian pipelines (5.4 bcm/y).

Under the swap deal, Iran receives Turkmenistan gas at their common border and delivers the same amount of gas at its border with Azerbaijan.

During a visit to Turkmenistan last March, Iranian President Hassan Rouhani was quoted as saying the two governments want to increase gas swap transactions and make a more extensive use of pipeline infrastructure to export Turkmen gas to third countries.

“Iran and Turkmenistan are very rich and powerful in the energy sphere, and so we agreed to undertake efforts to take our partnership in the sector to a higher level. We agreed in future to undertake wide-ranging talks on energy issues and I trust that during our future encounters, we will conclude major agreements,” Rouhani said.

The joint development of offshore gas fields in the Caspian was also discussed during the visit.