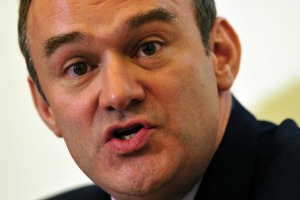 EXCLUSIVE / The UK energy minister, Ed Davey, says that any agreement with Poland over the EU’s proposed 2030 energy and climate change package must focus on “burden-sharing, fairness, and cost-effectiveness”.

Davey, a Liberal Democrat, was speaking to EURACTIV on the fringes of a Green Growth summit of 13 EU ministers to mobilise support for the EU’s 2030 objectives of a 40% emissions cut, a voluntary 27% target for renewables, and carbon market reform.

“Nobody is asking everyone to move at the same pace,” he said, a few hours before the 4 March Energy Council began. “What was in 2008 [when the last climate package was agreed] will not be the deal in March. We’ve got to take account of where people are and where they have been historically and that is accepted. I don’t think that’s controversial. The question is the details beneath that. We have to consider energy security, affordability and competitiveness."

"That is exactly what we expect the final deal to focus on," he added.

Merging these themes would reassure east European states, including Bulgaria, the Czech Republic, Hungary and Romania that their interests were being catered for, Davey argued.

Poland is seen as a climate renegade in many EU quarters for its coal dependency, use of a veto to prevent the other 27 members signing off on 2050 decarbonisation objectives, and a reluctance to implement the bloc’s clean energy directives.

But Davey swiftly dispatched environmentalists’ hopes that the Warsaw veto could be evaded by taking a vote on a qualified majority basis.

“We are not trying to get around anyone,” he said, adding that it would be in the interests of all to get a climate deal the whole bloc could sign enthusiastically at the forthcoming 21 March heads of state summit.

In press statements though, Polish diplomats continue to rule out any deal, which could be taken to a UN climate change summit in Lima this September. In 2015, a global climate pact is due to be agreed in Paris.

Katarzyna Reiter an analyst at Poland’s Centre for International Relations and member of the Polish environment ministry team during Warsaw’s EU presidency said that the country’s government was still “traumatised” by having signed up to the 2020 climate and energy package.

Reiter is part of a Polish foreign ministry-funded public outreach project called #climate4growth. “We want to postpone the debate,” she told EURACTIV over the phone from Warsaw.

“We want no legislated proposal from the Commission for as long as we there is no decision on burden sharing,” she said.  Non-binding emissions targets for 2030 would be a “sexy” and popular option for the Polish government, according to Reiter.

While he was accommodating to Polish concerns though, Davey was evidently frustrated by climate-sceptic Conservative MPs and lords, who he advised to keep their counsel in the face of overwhelming scientific evidence for climate change.

He also said that he believed the environment secretary, Owen Patterson, who has argued that global warming can be positive was changing his views in the wake of unprecedented UK floods, which the country’s Met Office has linked to climate change.

The Green Growth Group, which was initiated by the UK, had “strong support” from Number 10 Downing St, Davey said, but he cited a contingent of sceptics, including the MP Peter Lilley and Lord Lawson “who attack this agenda every day if they can.”

“My recommendation to most politicians who want to talk about the climate is to listen to the scientists and listen to the evidence,” he said. “Of course you can question it, but when there is overwhelming evidence you should tend to shut it.”

Political commentary in the UK has often focused on differences between Davey and the Chancellor of the Exchequer, George Osborne. But Davey insisted that “I actually work very well with the Chancellor.”

With Patterson too, Davey said that he had been “incredibly supportive of Owen’s calls for extra investment in flood defences and I do think that’s important.”

“There are both the mitigation and adaptation sides of climate change and Owen, with the brief he has, realizes increasingly the impact of climate change on the UK, whether it’s through flooding or extreme weather events and so on and the damage that it can cause.”

Climate-indifferent arguments have contributed to a consensus against binding national renewable energy targets in any EU 2030 package. But Davey said that a sole 40% emissions cutting goal would deliver the growth of wind, solar and tidal energies most cost-effectively.

“It is inconceivable that you would agree that target and not see huge amounts of investments flowing in to renewables,” he said, “inconceivable.”

The scenario was, however, envisaged by Greenpeace’s EU energy policy adviser Fredric Thoma who commented on the Council meeting: “A carbon target without a renewables and an energy efficiency target would be like a bicycle with no pedals: It will move but it won’t take you very far.”