Ukraine’s Naftogaz said yesterday (31 May) an arbitration court in Stockholm had ruled in its favour in a dispute with Gazprom over take-or-pay gas contracts, although the Russian firm said the ruling was an interim stage in the court process.

The result was welcomed by Ukrainian leaders as a breakthrough in Kyiv’s bid to reduce its energy dependence on Moscow after a 2013-14 uprising ousted Russia-backed President Viktor Yanukovich.

The gas dispute is a byproduct of the worsening relations between Kyiv and Moscow since Russia’s annexation of Crimea and the eruption of Russian-backed separatist violence in Ukraine’s Donbass region, which has killed more than 10,000 people.

In June 2014, Gazprom and Naftogaz lodged multi-billion-dollar claims against each other with a Stockholm arbitration court, which resolves commercial agreement disputes (see background). 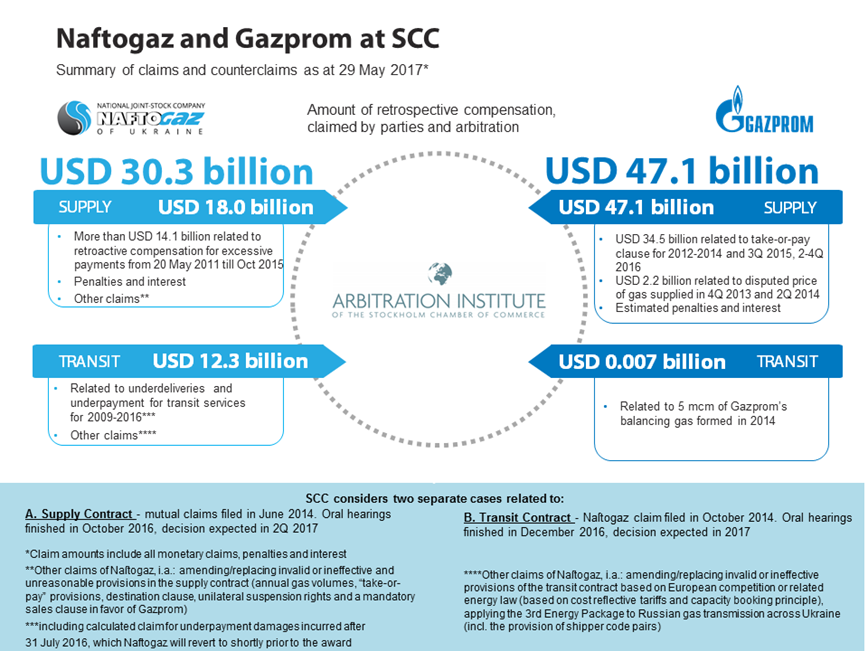 Ahead of the court’s first ruling, there had been no consensus on the likely outcome.

In a post on Facebook, Naftogaz Chief Executive Andriy Kobolyev announced the decision in the company’s favour by posting a link to the Queen song “We Are The Champions,” and writing “We did it.”

“The tribunal rules Naftogaz Ukraine is entitled to a market-reflective adjustment of the price formula,” Naftogaz spokeswoman Olena Osmolovska said.

A later ruling will decide how much Naftogaz could gain financially from winning the case in which it argued that its 10-year contract with Gazprom, which expires in 2019, is unfair and illegitimate.

Gazprom said in a statement it did not expect a final decision from the Stockholm court before the end of June.

Naftogaz, which is seeking a total of $30.3 billion from Gazprom, wants a lower price for Russian gas and disputed the take-or-pay clause requiring buyers to pay for gas whether they take physical delivery or not.

In a separate case, also being heard in Stockholm, Kyiv has demanded a higher tariff for the transit fee it charges Russia to transit to Europe. The case is ongoing.

Gazprom sought a total of $47.1 billion from Naftogaz over the two disputes.

Since 2014, Ukraine has been weaning itself off reliance on Russian energy supplies and has not bought gas directly from Russia since November 2015, relying instead on purchases from European Union member states and its own supply.

Ukrainian gas company Naftogaz issued a statement on Wednesday (8 June) indicating that it will consider purchasing gas from Gazprom, if the price is competitive, via direct contacts between the two companies.

President Petro Poroshenko welcomed the ruling as an “important step on the road to energy security.”

“Moscow, for the first time, has lost the ability to use gas as a weapon of political pressure and blackmail,” he said in a statement.

Russia temporarily cut off gas to Ukraine in June 2014 over what it said was Kyiv’s unpaid debt for shipments. Ukraine’s prime minister called it a Russian plot to destroy the country.

Russia had previously halted gas flows to Ukraine in 2006 and 2009, causing painful shortages in freezing weather in some EU nations.

Further down the road, Ukraine risks losing billions in gas transit fees it still collects from Russia if a controversial new pipeline, Nord Stream 2, is completed.

Ukraine insists on a price of $268.50 per 1,000 cubic meters while Russia stands by its demand for $485. The European Commission is trying to get the two sides to agree in the middle.

Due to disagreement over the pricing the two sides have taken the issue to the Stockholm arbitration tribunal, an institution for international arbitration affiliated with the Chamber of Commerce of Sweden.