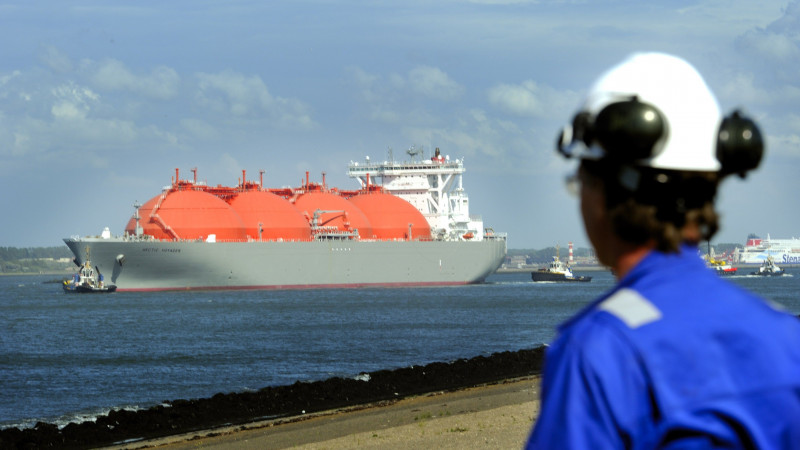 A carrier ship delivers LNG at a terminal in Rotterdam, The Netherlands. [EPA/EFE Lex van Lieshout]

US natural gas stocks returned to normal by the end of last year as a result of an exceptionally mild start to the heating season and high prices, which encouraged coal-fired power generation rather than gas burning.

Inventories depleted much more slowly than usual in the final two months of the year, erasing the storage deficit that had emerged between March and September, and lowering spot prices and calendar spreads.

Working stocks in underground storage depleted by around 418 billion cubic feet between 31 October and 31 December, compared with a pre-pandemic five-year average of 558 billion, and the smallest draw down since 2015.

In common with much of the northern hemisphere, the Lower 48 states experienced a very mild start to the heating season in November and December.

Northern hemisphere land surface temperatures were on average 1.86°C higher than the long-term seasonal norm in November, making it the warmest November since 2010.

Unusual warmth across North America and Eurasia continued and became even more pronounced in December, helping ease pressure on gas and coal supplies in the United States and around the globe.

In the United States, the cumulative number of population-weighted heating degree days was 20% below the long-term average by the end of December.

Before the onset of warm weather in November, exceptionally high gas prices had already encouraged significant switching from gas to coal-fired power generation.

Gas-fired generators rapidly became uncompetitive in a generation market which was itself diminished by warm weather and lack of heating demand.

The consequence is that both spot prices and calendar spreads have plunged as traders downgrade the likelihood of shortages before this winter ends.

Futures prices for gas delivered at Louisiana’s Henry Hub during January 2022 expired at the end of last year at just $4.00 per million British thermal units down from a peak of $6.50 in early October.

The spread between prices for deliveries in March and April 2022, a proxy for the probability of a shortage of gas before winter ends, collapsed to a backwardation of just 5 cents from $1.80 in early October.

Warm weather has left the United States with enough gas to meet domestic needs and export record volumes of LNG to relieve shortages in Europe, at relatively moderate prices.

In real terms, prices at the end of December were in only the 63rd percentile for all months since 1990, high but not exceptional, down from the 84th percentile at the end of September, despite record LNG export volumes.

After the pandemic-driven global gas glut in mid-2020, followed by the prospect of a severe worldwide shortfall in mid-2021, gas availability has been rescued by a winter so far much milder than normal in most major consumption centres.