In a fresh sign of new energy trends in Europe, Belgium plans to double the amount of its waters made available for offshore wind farms, while Denmark has revealed the intention to build enough turbines to power its seven largest cities.

On Friday (20 April), the Belgian government announced it would designate a new 221-square-kilometre area near French waters for use by wind farms after 2020.

Belgium currently only gets 870 megawatts of power from four offshore parks but has plans to up that figure to 2.2 gigawatts by 2020 and 4 gigawatts by 2030, as part of its plans to cut emissions and phase out nuclear power.

“Our North Sea is a crucial partner in the energy transition towards renewable energy which is happening in our country,” Belgium’s state secretary for the North Sea, Philippe De Backer, said in a statement.

The Belgian government confirmed in late March that it would implement an energy plan under which nuclear power will be phased out between 2022 and 2025. That means 6GW of energy will be taken offline and will have to be replaced.

Half of the country’s electricity comes from atom-smashing and about 40% of total power needs are provided by two nuclear power plants at Doel and Tihange, located on the Dutch and German borders, respectively.

Denmark also has big energy plans and Energy Minister Lars Christian Lilleholt revealed on Monday (23 April) that his government is hoping to open one of the biggest wind farms in the world.

“We are talking about a very, very big wind energy park that will play a central role in terms of the government reaching its goal of at least half of Denmark’s total energy consumption being sustainable by 2030,” Lilleholt said according to Danish media.

He added that the park would be located around 50km out to sea and have enough capacity to generate 800MW, enough to power Denmark’s seven biggest cities.

Although plans for the park will not be ready until around 2024, a contractor to build between 50 and 75 massive turbines could be decided by 2021. It is also possible that construction costs could be covered without the need for public subsidies.

Construction is still ongoing on the Baltic Sea wind farm at Kriegers Flak, which is expected to be ready in 2021 and be able to generate 600MW.

EU imports on the up

A downturn in primary production of fossil fuels, as well as nuclear energy, means that the EU’s energy imports have increased, according to new data from Eurostat, which shows that the bloc now depends on imports for more than 50% of demand.

Denmark failed to beat Estonia to the title of the least dependent member state after its 13.9% effort paled next to the Baltic country’s 6.8%. It completes a fall in grace of sorts for Denmark, which was the only net exporter among the member states in 2005. In 2013, imports started to outweigh demand.

Malta and Cyprus unsurprisingly topped the charts with 100% and 96.2% dependence, due mostly to their island status and energy isolation. Among the five countries that consume the most energy, the UK and France were the least dependent, with 35.3% and 47.1%, respectively. 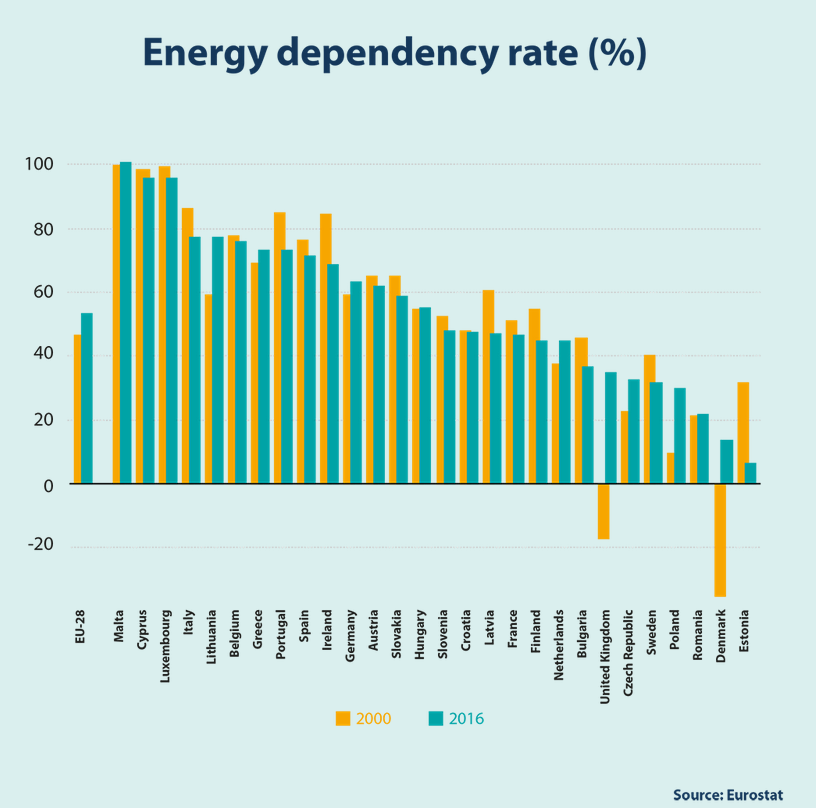