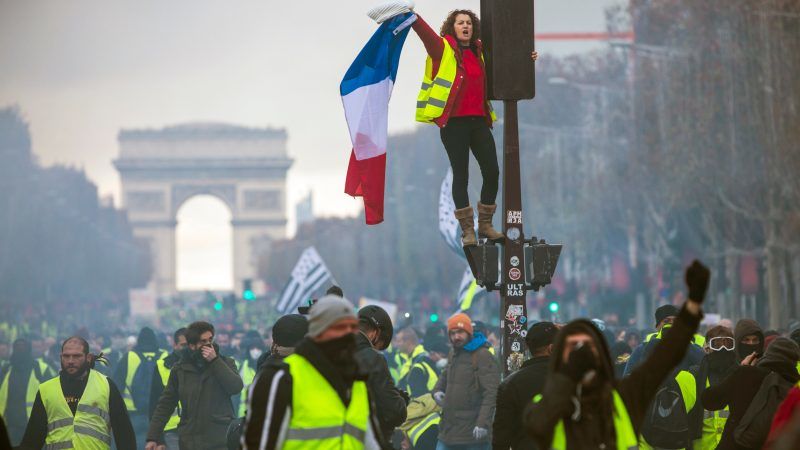 A woman wearing a yellow vest, as a symbol of French driver's and citizen's protest against higher fuel prices, waves a French flag during clashes with police forces on the Champs Elysee as part of a nationwide protest in Paris, France, 24 November 2018. [EPA-EFE/CHRISTOPHE PETIT TESSON]

Since 17 November, protesters clad in fluorescent jackets, dubbed “yellow vests”, have blocked highways across France, setting up burning barricades and deploying convoys of slow-moving trucks to complain about fuel prices.

The unrest, initially focused on the French carbon tax, – which added about 10 euro cents to the litre of petrol and diesel – reached new heights in Paris over the weekend when police clashed violently with thousands of demonstrators on the Champs-Elysées.

Protesters framed the unrest as a social backlash to the climate policies of France’s former ecology minister, Nicolas Hulot, the architect of the French carbon tax.

“It’s a big joke and a hoax when I hear about the energy transition,” said Benoît Julou, a spokesperson from the “yellow vests” movement in Brittany, who was addressing Hulot during a political talk show on French television last Thursday.

For Julou, the calculation is simple: ecological taxes on fuel are unaffordable for people who live on €1,200 per month and pay €450 in rent. And the government’s proposed €4,000 aid scheme for people to scrap their old diesel in favour of an electric vehicle is insufficient to buy cars that cost €10,000 at least, he said.

“We are not against the ecology, on the contrary. But you’ve lost touch with reality!” Julou told Hulot.

French people seem to agree. An opinion poll published in Le Journal du Dimanche on 18 November found 62% of French people give the highest priority to purchasing power – even if that means delaying the energy transition.

Greens have retorted that the ecological share of fuel taxes is minimal compared to the overall tax burden on petrol and diesel. Alongside French President Emmanuel Macron, they argue that taxing polluting fossil fuels is necessary in the transition to clean energy.

“From the moment we consider that fossil fuels are the enemy of humanity, we must encourage people” to switch to clean energy “by giving a price signal,” Hulot replied to the “yellow vests” spokesperson. And in order to soften the impact on the poorest, measures should be taken to reduce their energy consumption, Hulot added.

“Do not lay the blame on the ecology, put it on the taxation burden, put it on tax inequality – this is what we have to fight,” Hulot retorted in his first live TV appearance since his resignation last August.

Still, the “yellow vests” movement has struck a chord. In Europe, the debate on the “just transition” is gaining momentum in the run-up to the United Nations’ annual climate conference which opens next week in Katowice, Poland.

Earlier this month, Members of the European Parliament voted in favour of a €4.8 billion Just Energy Transition Fund in the EU’s next long-term budget (2021-2027), in order to help regions move away from coal and other polluting industries.

“It’s a drop in the ocean but it’s at least a first step,” said Christine Revault d’Allonnes-Bonnefoy, a French Member of the European Parliament from the social democrats group (S&D).

According to her, governments “cannot tax pollution on the one hand without accompanying changes” in terms of mobility and industrial change on the other hand.

“Otherwise, we will continue to have discontent on the part of those who suffer the repercussions,” she said, calling for a comprehensive approach to sectors like the car industry, which are set to suffer the most from the energy transition in terms of job losses.

“The ecological transition, for it to be accepted, it must be understood, it must be transparent,” Revault d’Allonnes told EURACTIV.

To be sure, the energy transition will affect some industrial sectors badly. “The impact on jobs will be important. And we must take care of those workers who will be affected” by the decarbonisation agenda, said Montserrat Mir Roca, from the European Trade Union Confederation (ETUC).

“If the decarbonisation agenda leaves people behind, it will be rejected by the citizens,” she told a EURACTIV event earlier this month.

But the European Union has limited competences on social policy. And EU member states are often left on their own when it comes to dealing with the social consequences of climate policies that are often designed at the European level.

“The social aspect at European level is very difficult because there is no treaty on social Europe. It’s a big lack, a big void,” says Karima Delli, a French Member of the European Parliament for the Greens political group.

“Why are yellow vests on the street? Because it is primarily the poorest who will be victims of climate change,” Delli told EURACTIV, saying she supports “a popular ecology” that takes care of the weakest first and “makes sure the better-off participate to the collective effort,” for example with the introduction of a tax on kerosene, she said.

Beyond taxation, Delli believes a global vision is needed for sectors like the auto industry, which is going through a phase of profound transformation brought by electrification and growing competition from China, which is moving faster than Europe on the deployment of electric vehicles.

“Member states must understand that the climate battle is the battle for jobs,” Delli said. “We must change course, enter the 21st century,” she stressed saying too much money has been poured into industries that are not fit for future challenges.

“Today, everyone must have in mind that the sectors where there will be the most job creation are the sectors of the energy transition,” Delli said, citing renewable energies, and energy-efficient buildings alongside electric vehicles and digital mobility solutions.