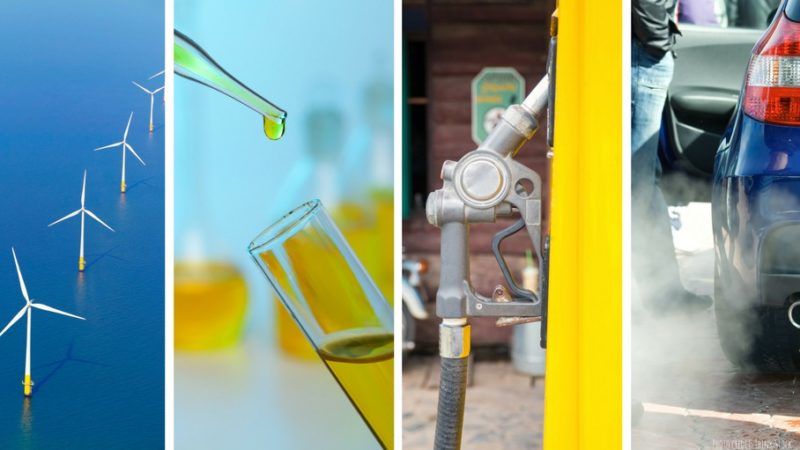 Using vast amounts of renewable energy to convert CO2 into fossil fuels could take a large toll on Europe's climate initiatives. If power from a wind turbine goes straight to the exhaust of a car, the EU's renewable target will vanish into (and pollute) thin air, Bellona warns. [Think Stock/Bellona]

Jonas Helseth is the director of the EU office of the environmental NGO Bellona. Bellona promotes climate solutions which enable pathways to complete decarbonisation and have no detrimental effects on other decarbonisation strategies or on our society.

The revised EU Renewable Energy Directive (RED II) proposes to introduce a certain amount of “renewable liquid and gaseous transport fuels of non-biological origin” to boost the use of renewable energy in transport.

In a nutshell, this means using vast amounts of (in the best case) renewable energy to produce hydrogen, pair it with fossil CO2 from emitting industries and, finally, emit that same fossil CO2 from a car, calling it ‘low-carbon’ and ‘renewable’.

Although its contribution to climate change mitigation is limited at best, the technology is being presented as a ‘breakthrough’ that will help decarbonise both industry and transport. If such a target were to be approved, what would be its real-world implications?

Bellona’s latest report tackles this question by reviewing some of the alleged benefits of using synthetic fossil fuels. While industry companies might get a piece of cake, both our society and our environment could pay a high price for their production. Bellona is strongly in favour of supporting European industry, but not at the cost of the climate, let alone using climate mitigation instruments when any positive climate impact is at best dubious.

The potential consequences of using wind and solar energy to produce car fuels are alarming.

To begin with, just like a conventional petrol-powered car, a vehicle running on synthetic fossil fuels would emit a similar amount of CO2. Calling the fuels ‘low-carbon’ not only gives false impressions about their potential to address climate change but also sustains the use of fossil-fuelled engines in cars, undermining car makers’ incentives to cut emissions. Maintaining conventional engines will distract from the development of real low-carbon solutions, such as electro-mobility.

Instead of using renewable electricity to power our homes, businesses and electric vehicles, vast amounts of electricity would be gobbled up in the production of these fossil fuels. As production is unlikely to be switched off whenever the wind isn’t blowing or the sun isn’t shining, this increased electricity demand might also end up prolonging the use of coal and imported fossil gas that ensure grid baseload. In other words, this ‘breakthrough technology’ is likely to encourage all the technologies we’re trying to break away from.

In other words, this ‘breakthrough technology’ is likely to encourage all the technologies we’re trying to break away from.

Apart from devouring renewable electricity on a massive scale, the fuels would be produced by using cheap CO2 from industry. The emitted fossil-origin CO2 could easily be accounted for within the EU Emission Trading System (ETS) at a bargain CO2 price, rendering the fuels ‘low-carbon’ on paper.

As demand for this CO2 from industry would grow, we could see another detrimental outcome: industry would be incentivised to produce more CO2 emissions to meet the growing demand. In other words, industry like steel or chemicals would have an incentive to produce not less but more CO2 per tonne of product, undermining all energy and resource efficiency gains made to date.

Essentially, this would void EU energy-intensive industries’ incentive for reducing their CO2 emissions by letting them simply move it to a different sector, transport, and get paid well more for their ‘CO2-free’ CO2 than the cost of ETS Emission Unit Allowances (EUAs).

Without massive subsidies and preferential treatment, synthetic fossil fuels cannot compete with existing fuels. One could argue that subsidising their production would be justified if they were to contribute to the public interest, notably climate change mitigation. Yet studies have shown that their effect is at best minimal in comparison to other, readily available and far cheaper solutions.

The European Commission clearly had not done its due diligence before making this proposal.

In November, following the initial leaked versions of the EU RED II, Bellona Europa even wrote to the Commission’s Regulatory Scrutiny Board, asking how it was that the Commission could introduce such a target and measure without a public consultation or even a proper impact assessment, let alone proper Life Cycle Assessments.

Nonetheless, the Commission retained the measure. It’s now on the European Parliament and member states to ensure the necessary scrutiny.

What might be done to prevent these unintended consequences?

To start with, the environmental impact of the fuels should be calculated from the very origin of their key ingredients to the moment their fumes exit from the back of a car. Considering their complete emissions profile will be crucial in determining any potential to reduce emissions.

If these fuels are to be considered a ’low-carbon’ and ‘circular’ technology, the CO2 used for their production process needs to be taken out of the air rather than from a fossil source. This would technically re-use the CO2 that was emitted in the past, making the process circular.

However, given the far lower CO2 concentration in ambient air than from any industrial point source, air capture is never going to be interesting from an economic perspective as long as we have emitting industry. Hence, the suggestion that those fuels will fit in a ‘circular economy’ concept in any relevant timeframe is plainly bogus.

Finally, the fuels should not be favoured over other fuel technologies and should be required to at least meet the same CO2 emissions reductions compared to petroleum-derived fuels as is required of biofuels on the EU market.

The renewable energy revolution is the story of our generation – let’s use it to power our homes and mobility instead of letting it literally go up in smoke.