An unexpected victory for renewables in Poland 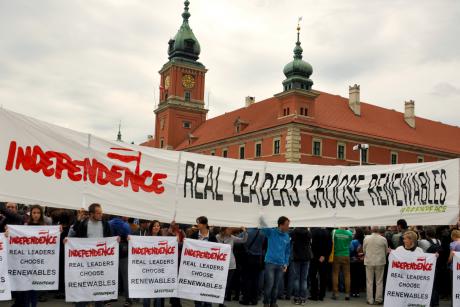 Poland may be on its way towards an energy transition. [NYU Berlin]

Poland has a new law on renewable energy subsidies, providing stable feed-in tariffs to owners of small plants with a capacity of up to ten kilowatts. Yet, the long and tiresome journey of this law shows that the Polish energy transition is still in its infancy.

One could tell from the facial expression of Radoslaw Sikorski, President of the Polish Parliament, that the results of the parliamentary vote over renewable energy subsidies were unexpected. The new law allows owners of small renewable energy installations to profit from fixed feed-in tariffs for the first time since the 1990s. The law obtained a majority in the Sejm, the lower house of the Polish Parliament, in late February. The surprise element is that this majority came about despite fierce opposition within the incumbent party, Civic Platform (PO).

At the end of 2014, hardly anyone believed this change in the law would be successful. According to the original proposal, owners of installations generating less than 40 kilowatts (kW) would have been able to feed their surplus electricity into the grid for 80 per cent of stock prices. This would have amounted to a de facto subsidisation of big energy companies by prosumers (those that both produce and consume energy). Even intense debates did not yield any significant changes in the proposal.

Even the initiators of this new proposal doubted that the vote would yield a majority in Parliament. The objective was primarily to make a point of their opposition to this law, which discriminated against prosumers. Surprisingly, this new proposal was brought forward by the Polish People’s Party, junior partner in the acting coalition.

Faced with a choice between loyalty to his party colleagues or to the government, Minister of the Economy Janusz Piechocinski picked the government. Nonetheless, the final draft law was passed in the Sejm with a slim majority of two votes, with the help of the opposition and some votes from within the People’s Party.

But the debates had only just begun. The amendment had yet to be passed through the Senate, where the Civic Platform, which had previously opposed energy prosumerism, had an absolute majority. The acting party rejected the amendment and suggested that instead of fixed feed-in tariffs, investors should receive 210 per cent of the stock exchange price.

In February, the upper chamber of the Polish Parliament would make a final decision on the renewable energy law. This time, it would take an absolute majority of votes in order to reject the amendments proposed by the Senate.

People awaited the parliamentary vote with great suspense. On the day before the vote, Greenpeace and WWF published calls to the Parliament in the media, asking them to reject the Senate’s amendments and follow through with the feed-in tariffs. On the morning of the vote, popular Journalist Jacek ?akowski warned in a radio show that a decision against the feed-in tariffs would represent a decision against energy independence, and would play into the hands of Gazprom. This argument was later quoted during the debate in Parliament.

This time, Sikorski, the President of the Parliament, announced the results of the vote without hesitation: The members of Sejm hat rejected the Senate’s amendments by 227 votes and re-established their initial decision on the feed-in tariffs, with the support of Economy Minister Piechoci?ski this time round. The Civic Platform was left hanging in its opposition to the citizens’ energy.

The adoption of the feed-in tariffs represents a U-turn in Polish energy policy. While the overall capacity of installations benefiting from the feed-in tariffs is limited to a maximum of 800 kW, at least 200,000 prosumers in Poland should be able to profit from this law. This would make citizens’ energy a mass phenomenon, the same way it has in many countries on previous occasions, and could shift the Polish government’s priorities.

However, there is also bad news for renewables in Poland. With the renewable energy act, the country has opened bids to subsidise large-scale installations. Yet there is no room for learning and improvements via pilot projects as was the case in Germany. Big energy companies will continue to dominate the market for large-scale installations, leaving little space for cooperatives, which play a huge role in the German electricity sector.

The future of renewables in Poland could further be in danger should the Law and Justice Party (PiS), currently the biggest opposition party, win the next elections. While the party unanimously supported the feed-in tariffs, they generally oppose other renewables like wind energy.

One of PiS’ most influential members, Anna Zalewska, advocated for a moratorium on the construction of new wind energy plants following the decision on feed-in tariffs. The party had previously put forward a draft law for dismantling any wind energy plants built within three kilometres of a residential area. This proposal fell through due to opposition from Civic Platform members.

Whether Poland will start its own energy transition, and what this transition will look like, will very much depend on the parliamentary elections this October. Yet one thing is clear: for the first time ever, renewable energies will be an important subject in this election campaign.