Some 65 years ago, after the devastation of World War II, the European Coal and Steel Community provided the vision, the coordination, and the investment that fuelled an unparalleled period of growth and stability in Europe. It laid the foundations for what then became the European Communities, the EEC and then the European Union. But ironically the energy sector got left behind.

Now is the time to update the vision. The great strength of that original Community was not to obsess about sovereignty, but to focus on a real, substantial and urgent task that required collective action. At long last, EU countries have initiated an Energy Union. It started from perhaps unexpected quarters, as Poland sought a unified European response to concerns about their excessive dependence on Russian gas. But the solution is not to go back to the dirty fuels of past centuries. Europe’s energy future can be clean, diverse, secure, and interconnected.

The old ways of energy production, emitting 40 billion tonnes of heat-trapping gases every year, are slowly choking our planet. Last year was the hottest on record; the Arctic ice this spring is the thinnest ever seen.  Fortunately, the solutions are at our fingertips.  Within less than a decade, the cost of solar energy has halved, that of wind has fallen by a third, batteries by 60%, and some technologies for energy efficiency by even more.  Crucially, the costs of both electricity system management and long distance transmission have also fallen.

What that means is that we can have radically new energy systems, combining localised generation and storage with larger resources and backup pooled across regions. But there is a catch. The cost reductions to date have been driven by the collective impact of national efforts, including those in the framework of the EU’s commitment to get 20% of its energy from renewables by 2020. We are on course to deliver that goal and it has driven the creation of new industries and scale economies.

The next stage will be harder. Going much further requires a more integrated effort with more connected energy systems. The wind does not blow (or cease to) everywhere at the same time across the continent. The biggest and best resources are scattered in different corners of Europe, and the vast swathes of the North Sea, the Baltics and parts of the Mediterranean.   The sun’s track from east to west can help solar output to smooth morning and evening peaks, but far more important is the difference between north and south, and across the seasons.

We will need storage of both electricity and gas. Gas is much cleaner than coal, and we can use our gas infrastructure and storage further in the future as we move towards ‘greener gas’ – for example producing hydrogen from surplus wind and solar output and injecting it into gas grids.

There is one big catch: politics, most fervently on display in the UK referendum.  The UK could play a great role in building this future. We have leading energy expertise, superb wind resources, and are well on our way to doubling our electricity interconnections with the continent.

Our gas systems complement each other: central European dependence on Russia is matched by British dependence on the Middle East, so conjoined, each can help the other. As our own gas reserves decline, the North Sea also offers wind, waves and capacity to store both gas and perhaps carbon dioxide, as well as connections to Scandinavian hydro-electricity storage. The economic value of the industries will be immense, and the savings arising from fully integrated approaches in energy by 2030 have been estimated at up to €50-80 billion by 2030 – hundreds of euros per household.

But all that needs an integrated approach and investor confidence grounded in a clear European vision, strategy and collaboration. That is what the Energy Union can provide. On both sides, the UK referendum campaign has been astounding in its negativity and inward nationalism. Britain is bigger than that. We should raise our sights, and aspire to help build the EU’s new Energy Union. 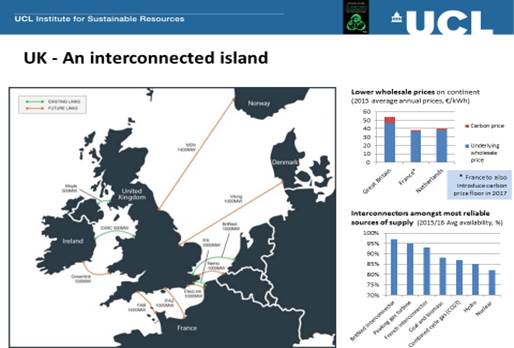