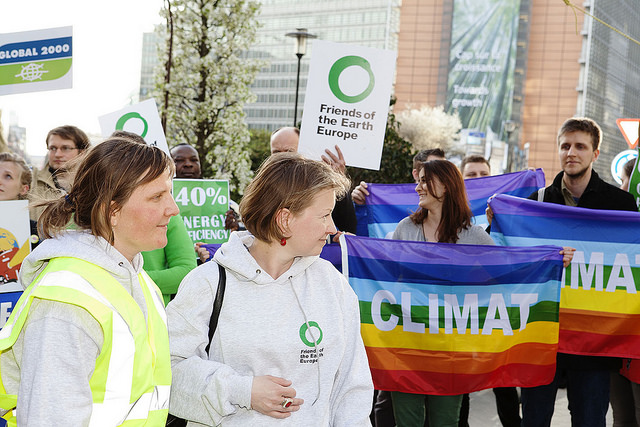 European citizens are increasingly taking control of their energy supply, introducing secure, renewable sources, through community initiatives, writes Susann Scherbarth. At a time of precarious energy security, community energy needs to be explicitly recognised as part of the EU 2030 framework, which will be discussed by EU leaders next week.

Susann Scherbarth is a campaigner with Friends of the Earth Europe

The citizens’ movement of community-owned wind turbines, sustainable biomass plants, small hydro-electric schemes and roof-top solar panels, is providing secure, renewable energy at a time when the European Union is facing precarious energy dependency and the threat of climate change.

From Denmark to Portugal, Scotland and Italy, there are thousands of community energy initiatives producing and supplying energy – in Germany alone 1.5 million citizens generate electricity on their roofs.

Yet as European leaders hammer out a 2030 climate and energy action plan next week there is no dedicated European legal framework for community energy. Instead we have piecemeal support for this burgeoning sector.

On one hand Scotland has a national community energy target that it is well on the way to achieving, on the other hand the Spanish government recently removed its renewable energy subsidies.

We also have intense lobbying by corporate fossil fuel and nuclear energy suppliers who have failed in the main to embrace renewable energy in the last decade and who are now threatened by the citizens’ energy movement.

The CEOs of Europe’s ten largest utility companies, the so-called Magritte group, which together own half of Europe’s electricity generating capacity, are calling for an end to subsidies for wind and solar energy. They have been meeting with heads of state and European Commissioners to protect their interests by calling for an end to targets for greenhouse gas reduction, energy efficiency and renewable energy.

At last week’s EU Open Days in Brussels, a conference “Community energy across Europe – making it happen” brought together community energy cooperative members, politicians, policymakers, renewable energy trade associations and climate change campaigners to take stock of their success to date and to plan for the future.

Luxembourg MEP Claude Turmes was upbeat. “Thanks to you we are on the move to changing the energy system of Europe,” he said, noting that both technology and policy have aided the growth in community-owned renewable energy.

That Europe’s energy system is in a serious transition was echoed by Marie Donnelly of the European Commission’s DG Energy. “Europe’s energy has been on a path of evolution and it’s now looking like we are moving into a revolution of the system,” she said.

One example of this revolution was provided by Sebastia Riutort Isern, of Som Energia cooperative in Spain. Its goal is promoting citizen participation in changing the current energy system for one that is 100% renewable, efficient and in the hands of citizens.

When the cooperative started supplying electricity from renewable sources in October 2011 it had 750 members. Now, it is managing 18,000 electricity contracts. The cooperative is independent of bank loans having raised finance at the grassroots level and it employs 12 paid staff.

Another inspirational story came from Schoenau, in Germany’s Black Forest, where in 1991 the town’s citizens voted by referendum to take control of their local electricity grid. They set up an energy cooperative, EWS, which now has 3,500 members and 150,000 customers. It produces over half the renewable power that it sells, from a variety of sources including a wind turbine, solar panels and hydro plants.

“Everywhere you have democratic structures, Schoenau can happen,” Tanja Gaudian of EWS, told the conference. “The citizens energy movement has stepped so far forward that it won’t be stoppable.”

Fergus Ewing, Scotland’s minister for energy, enterprise and tourism, was justifiably proud of his nation’s community energy target of 500MW by 2020. “We are powering our way towards this target with nearly 300MW now, which is a 40% increase on last year.”

Time for policymakers to listen

Against a backdrop of international scientific consensus on the urgency for radical action to limit global warming to safe levels, and given Europe’s precarious energy dependency and mounting insecurity in supplier countries, it is time for European decision makers to listen to the people who are leading the energy revolution.

The EU 2030 framework is a crucial package of legislation for getting Europe on track to a just energy transition based on effective energy savings measures and renewables. Community energy needs to be explicitly recognised as part of the EU 2030 framework. In particular community energy must be integrated into the EU renewables directive with a longer-term view of carving out a policy space for community participation and decentralised energy within Europe’s energy market.

In addition Friends of the Earth calls for domestic community energy targets to be promoted under the renewables directive.

With such a framework and the right support at national level communities’ control in, and ownership of, clean energy can increase and flourish.