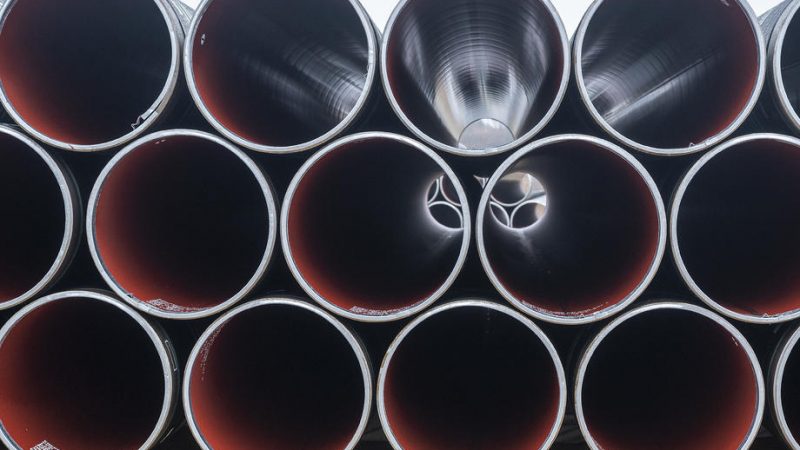 Gas pipes are waiting to get into the ground at Houstrup Strand, Noerre Nebel in West Jutland, Denmark, 23 February 2021. [EPA-EFE/JOHN RANDERIS]

The EU’s upcoming hydrogen and gas market decarbonisation package needs to address an array of key questions, including redirecting subsidies away from fossil fuels towards cleaner and renewable gases, argue scholars from the Stockholm Environment Institute.

Gökçe Mete and Timothy Suljada are research fellows at the Stockholm Environment Institute. Astrid Nilsson is a research associate and Adil Aslam is an expert at the SEI.

Energy policy is a central pillar in the European Green Deal and in the decarbonisation of the European economy.

The European Commission’s revision of the gas directive and gas regulation is instrumental to facilitate and accelerate the market entry of renewable and low-carbon gases in Europe towards climate neutrality by 2050. It will be the first regulation to include renewable hydrogen.

But what are the key aspects of these revisions that can help achieve these goals?

For renewable gas to valuably complement renewable electricity and other renewable energy sources, there is a need for swift policy adjustments to bring in the clarity in the regulatory and policy framework needed for creating a sound market.

The revised EU gas directive for the Hydrogen and Gas market Decarbonisation package needs to address an array of key questions:

The current EU policies are inconsistent: subsidies for fossil fuels continue alongside tighter regulations against GHG emissions. Redirecting fossil fuel subsidies towards cleaner and renewable gases could instigate a rapid roll out.

The Gas Directive needs to be modified regarding the consumer focus of a sustainable and clean gas supply system. Provisions to manage energy poverty risks through a nominal connection price for small households should be added.

A smart metering system, a detailed cost, and source breakdown (i.e., fossil, renewable, low carbon) should be provided. In addition to the energy mix information and the energy used in previous months, the energy consumption behavior curve and recommended curve to save energy should be included.

This can help to empower consumers to control their consumption according to ability of consumers to pay and protect against consumer disconnections.

Competitiveness of hydrogen and biogas needs to be addressed. In the current scenario these alternatives are, for most sources costly, and a market must be created.

To reap the full benefits of future hydrogen infrastructure investment, there must be a smooth functioning cross-border hydrogen trade.

The main regulatory barriers to this are: the guarantees of origin, quality standards, absence of standardisation and technical regulation bodies across jurisdictions. In addition, the Gas Tariffs Network Code may need to be revised.

To foster the establishment of a well-functioning and competitive hydrogen market and hydrogen infrastructure, competition in the market needs to be promoted internationally and within the EU.

At the EU level, the development of market rules and mechanisms should be set out early to prevent regulatory divergence between member states that could create investment certainty.

To prevent the hydrogen system operator’s monopoly against the third party, market rules should include restrictions on the same company having effective control over both the hydrogen network and hydrogen production or supply interests.

Exemptions for network operators to own or operate power-to-gas installations should only be allowed in clearly defined circumstances.

The EU Commission is now revising the old regulations and will present the new version later this year. It is chance for the Commission to put in place brave regulations that will put EU on the right track necessary to reach its net zero target.