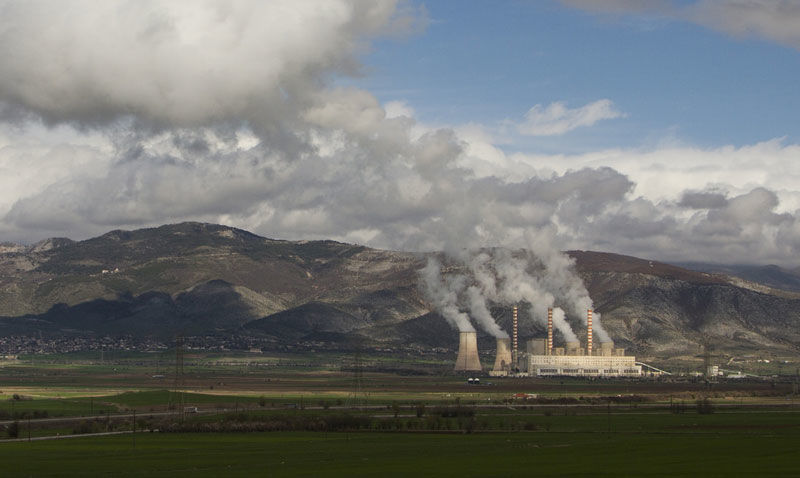 Greece’s electricity sector is in dire need of modernising its energy and grid infrastructure and investment in renewables. [Andrea Bonetti]

The European Parliament will decide Wednesday (15 February) on the future of the emissions Trading System (ETS). But in this vote, it’s not just EU’s leadership role in global climate policy at stake, writes Nikos Mantzaris.

Nikos Mantzaris is an energy and climate policy officer at WWF Greece.

Since the ETS is the most mature and sophisticated carbon pricing system globally, Wednesday’s vote will send signals worldwide on how seriously the EU intends to fight climate change.

Regrettably, the discussion on the inclusion or exclusion of the cement sector in the carbon leakage list has almost monopolized the public debate since ENVI’s deliberation in December, overshadowing even the hotly contested issue of the linear reduction factor. As Ian Duncan, the Scot rapporteur from European Parliament’s Committee on the Environment, Public Health and Food Safety (ENVI), would tell anybody, these negotiations amongst the political groups were draining, to say the least.

Among the unsung stories of the ENVI’s compromise was Greece’s bid for an “Article 10c derogation” in order for its electricity sector to receive free emission allowances for the period 2021-2030.

The Greek Public Power Corporation and the Greek government have been lobbying for free emission allowances as part of the revision of ETS, for almost two years. Meetings of the President of the PPC, and Greek energy ministers, with Miguel Arias Cañete, questions in the European Parliament asking for a change in the base year in the Commission’s proposal so that Greece can become eligible, letters of the prefect of Western Macedonia to the Commissioner describing the dead-end the region is facing without free emission allowances, intense pressure on all Greek MEPs to submit amendments in the committees of the European Parliament, have all been employed to achieve this goal.

The main purpose of this persistent plea is the subsidisation of the operation of two new lignite plants for a whole decade. Without these free emission allowances, estimated to be worth €1.75-2.5 billion, these plants are not economically viable, as even the president of PPC has admitted recently in an Economist Forum. Through the construction of the two plants, PPC is hoping to reverse lignite’s downfall, which saw its share plummet to 29% in 2016 from over 54% in 2012, before the third ETS phase begun, obliging EU’s electricity sector to pay for its CO2 emissions.

Despite the low carbon signal during the last four years, this new ETS rule, together with the necessity to retrofit in order to meet the stricter emission standards imposed by the Industrial Emissions Directive, had a significant impact on Greece’s lignite plants, forcing some of them to retire and others to commit to retiring by 2023.

Instead of accepting the global shift towards renewable energy after the Paris Agreement, PPC is refusing to invest in Greece’s huge renewable potential. It blindly insists on the lignite path with two new lignite plants and attempts to finance their operation with ETS money.

In the process of this crusade, PPC has managed to persuade the Greek government about the lack of any alternatives to this huge investments -worth approximately €2.5 billion- in an obsolete energy model.

The members of the ENVI committee became fully aware of the “Greek case” over the past few months. Having understood all the arguments, they decided against the PPC’s plea for an article 10c derogation in December. According to the ENVI’s decision, Greek lignite plants are not eligible to receive free emission allowances. Greece may use its own ETS money to modernise its energy infrastructure, excluding, however, retrofits of old lignite plants.

Despite ENVI’s loud and clear message to abandon lignite, 7 Greek MEPs from the political groups  most closely affiliated with the two parties in Greece’s government (GUE and ECR) tabled two amendments to change the base year for an article 10c derogation, which resurrect the exact same amendment rejected by the ENVI committee in December.

Greece’s electricity sector is in dire need of modernising its energy and grid infrastructure and invest in renewables. It does not need a revival of lignite.

Wednesday’s vote will largely determine which path Greece will end up following.