Europe’s hydrogen split: blue vs green and north vs south 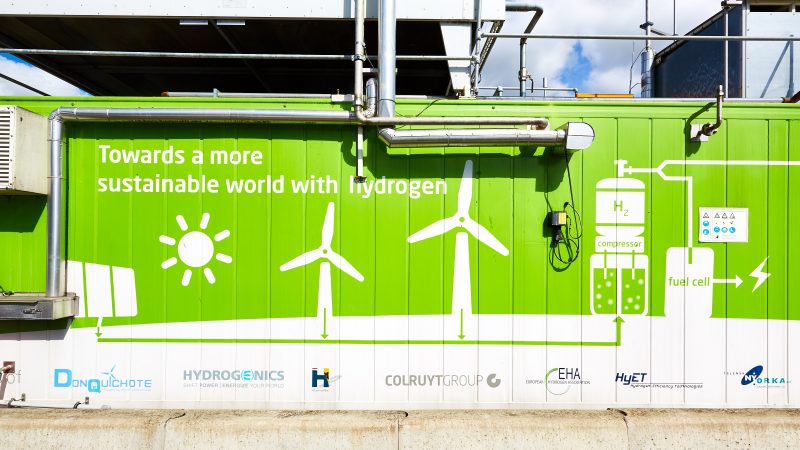 The only element keeping blue hydrogen projects alive are subsidies and as green hydrogen declines in cost more government subsidies will be needed. This might be good for Shell and Exxon but is unlikely to be popular with voters, writes Mike Parr.

Northern Europe is in danger of locking itself into a subsidy-dependent blue hydrogen system where all the risks sit with the governments and all the profits with oil and gas companies.

The European Commission’s hydrogen strategy, published in July 2020, noted that the role of blue hydrogen is to grow the market until green hydrogen from renewables takes over at some unspecified point.

Blue hydrogen is made from natural gas, a fossil fuel, but it deals with emissions by capturing the CO2 and storing it underground. Green hydrogen is obtained from water electrolysis, using renewable power as the feedstock.

The existing market for hydrogen in Europe is around 9 million tonnes per year split between hydrogen for fertiliser production (4 million tonnes), with the same amount used in cracking oil and the remainder for other purposes.

However, far from expanding hydrogen markets, blue projects in the EU focus on mitigating CO2 emissions from existing hydrogen production. For example, the Porthos CCS project in the Port of Rotterdam.

The Porthos project was granted a permit in May 2021, with partners including ExxonMobil and Shell. It aims to capture emissions from industrial emitters of CO2 in Rotterdam and Antwerp.

Significant emitters include hydrogen production supplying fertiliser producers and oil refineries. The Dutch state will give a subsidy of €2 billion, the EU a subsidy of  €100 million, via the “Connecting Europe Facility. So much for blue expanding hydrogen markets.

As reported in EURACTIV, German industry is very unhappy with the focus on green hydrogen. A recent report by Germany’s hydrogen council comes out in support of blue hydrogen and notes that demand by German industry will reach about 1.7 million tonnes annually by 2030.

The argument, put forward by industry, that there is “not enough space in Germany” for the large amounts of renewables that are needed to produce enough green hydrogen is untenable.

The actual reason there is little green hydrogen in Germany is because of the failure of the German government to build renewables at a rate allowing to scale up production.

Frauhofer ISE has estimated that the 500 lakes caused by Germany’s open-cast lignite mining industry could host more than 50 GW of PV. This could produce 0.750 megatonnes of green hydrogen per year, roughly 50% of the country’s industrial requirements in 2030. Many of these lakes are close to potential industrial users of green hydrogen.

The reaction of the German government to this good news? Fund a 3 year study into the technology’s revenue potential. This suggests that German politicians are either not serious about decarbonisation or about green hydrogen.

In the case of green hydrogen, most northern EU activity lacks scale or is tokenistic. Shell has commissioned a 10MW electrolyser at one of its refinery sites in Germany and is talking about installing ten times that amount of electrolysers. The “green” hydrogen will be used to “crack” oil turning it into transport fuel. A project of similar size is being developed in Denmark, with the green hydrogen used directly as a transport fuel.

In the southern EU, green hydrogen projects using a mix of renewables dominate. As one of the big 4 energy companies in Spain remarked, “Spain (ditto Italy) has no old gas or oil fields thus green hydrogen is the only way forward”.

So what’s the tally?

This list of green hydrogen projects is not exhaustive and totals 460MW of electrolysers.

PV technology, the main supplier of electricity for electrolysers in Iberia, will see profound increases in the efficiency of PV panels and thus the cost of PV electricity within 5 years.

Meyer Burger a Swiss-based cell producer at an investor presentation in April 2021 said that in the period 2023 to 2025 it will offer PV cells with efficiencies between 27.8% to 29.1% respectively, an improvement over current cells of 30% to 50%. JinkoSolar in its quarterly earnings report said that it expects to test a laminated perovskite PV cell with over 30% efficiency by the end of the year.

Considering costs from PV installations, the minimum price for PV in Spanish renewable auctions (January 2021) was €15/MWh. Recent Portuguese auctions delivered €11.2/MWh. These results are based on existing PV cell efficiencies of circa 20%.

Given PV technology developments, prices below €10/MWh are likely well before 2025. Using the above auction results, hydrogen prices (based on upper heating values) in the range eurocents2.5/kWh (€1/kg) down to eurocents1.65/kWh (€0.66/kg) are likely. Green hydrogen at eurocents 1.65/kWh is much cheaper than natural gas (currently trading above eurocents 2/kWh). A green hydrogen price of eurocents 2.5/kWh is at parity with blue H2 now.

For blue hydrogen, the Iberian story gets worse. The Hydeal project consists of 95GW of PV coupled to 67GW of electrolysers. This dwarfs everything else in the EU. Construction will start in 2022 and the Hydeal consortia forecast that the PV threshold of €10/MWh is about to be crossed.

So where do these real-world Iberia-focused projects leave high-cost, subsidised blue hydrogen?

The only element keeping blue hydrogen projects alive are subsidies and as green hydrogen declines in cost more government subsidies will be needed for blue. This might be good for  Shell and Exxon but is unlikely to be popular with voters.

How do German ambitions to import green hydrogen from far away places (e.g. Australia) fit with the EU ambition for greater energy independence? Will these imports be able to compete on price with more locally produced green hydrogen.

One conclusion to draw is that the Commission’s 2020 hydrogen strategy may unravel because as Thierry Lepercq (one of the leaders of the Hydeal project) memorably said “entrepreneurs and real projects have always beaten “studies” and “experts”, which have consistently proven to lag behind real market forces”.

Perhaps it is time for the Commission to focus on real-world events and link these to a “best guess” approach with respect to policy development in general and strategy in particular. This ad hoc approach, in a fast changing reneweable//hydrogen world, maybe the only workable option for a Commission that, given current events, seems to be in permanent catch-up mode.

3 responses to “Europe’s hydrogen split: blue vs green and north vs south”