An increased EU’s emission reduction target by 2030 is currently a hotly debated topic in Brussels.  Regardless of whether the target will be 55% or 60%, reaching EU’s ambitious climate change targets requires significant investment outlays.

As it is presented in the Impact Assessment prepared by the European Commission, annual energy system investments needs (excl. transport) to achieve the 55% level of ambition will be at the level of EUR 438 billion in 2021-2030. Probably, that cost will be borne by the most coal-reliant Member States and regions in the first place. More ambitious targets will mean a much larger investment challenge. According to our estimations, the implementation of the 55% emissions reduction in Poland would cost EUR 136 bn, which  means that the current level of funding is, however, insufficient to cover necessary expenses gap up to EUR 92.6 bn to be covered

Taking into account EU climate policies the PGE Group is becoming a leader in energy transition in Poland by achieving climate neutrality by 2050 and reducing its carbon dioxide emissions by 85% by 2030. According to a new strategy of the PGE Group published on October 19th the Group plans to have, by 2030, 2.5 GW of offshore wind capacities and to increase its onshore wind and PV capacities by 1GW and 3GW respectively. By 2030 zero- and low-emission sources will constitute 85% of the generation portfolio and share of renewable energy will amount to 50% of the total generation. The total expected capital outlay for the period 2021-2030 is approx. EUR 17 billion. 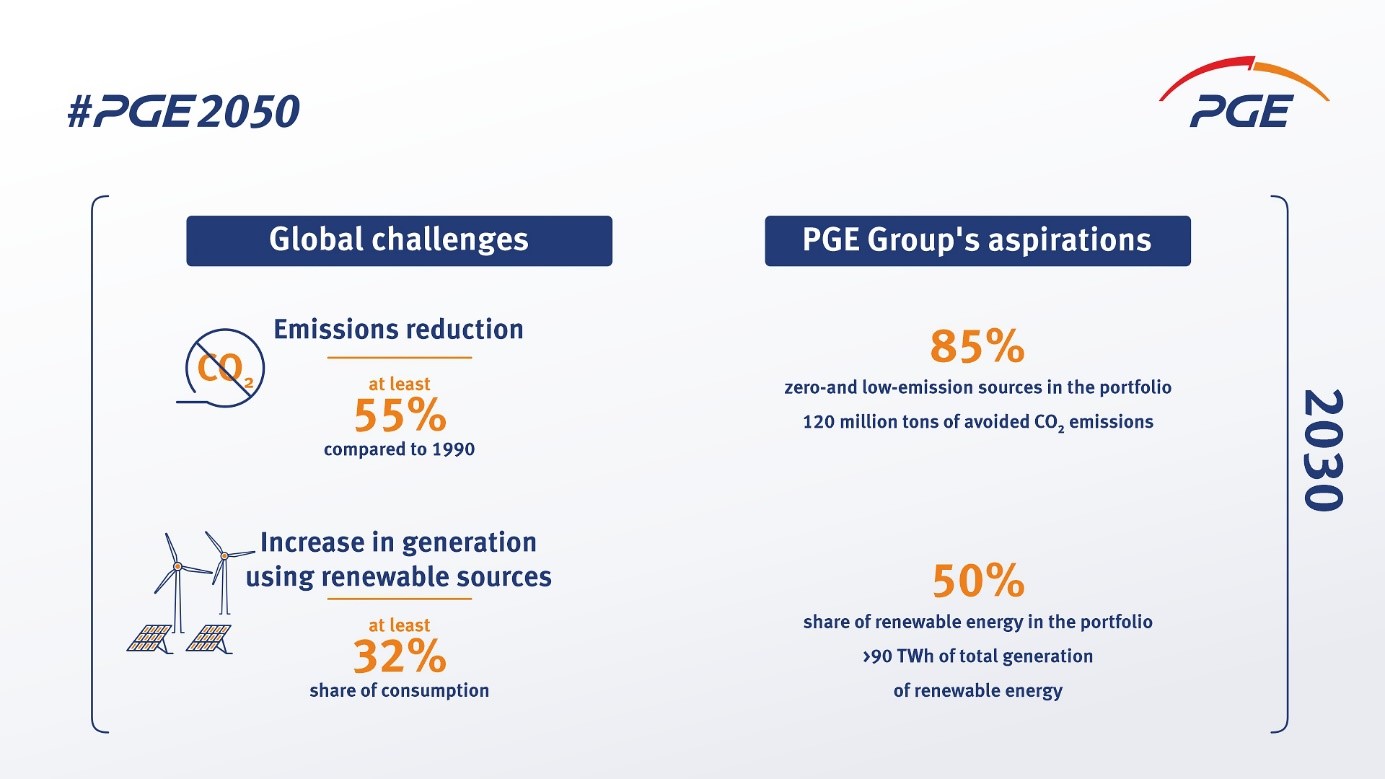 The total costs of reaching EU’s climate change targets are an enormous burden for Member States with GDP per capita significantly below the EU’s average and heavily reliant on coal, which have a different starting point in the transformation to a climate-neutral economy. Therefore a proper financing mechanism should be provided for these Member States so as to help them in this transition and not to leave them behind.

Possible funding for the energy transformation should come from the Multiannual Financial Framework 2021-2027 (MFF 2021-2027) including the Just Transition Fund and also from the new Recovery and Resilience Facility under Next Generation EU as well as form the EU ETS-based mechanisms such as the Modernisation Fund. Sustainable finance is a way of directing financing from the private sector towards climate change targets. 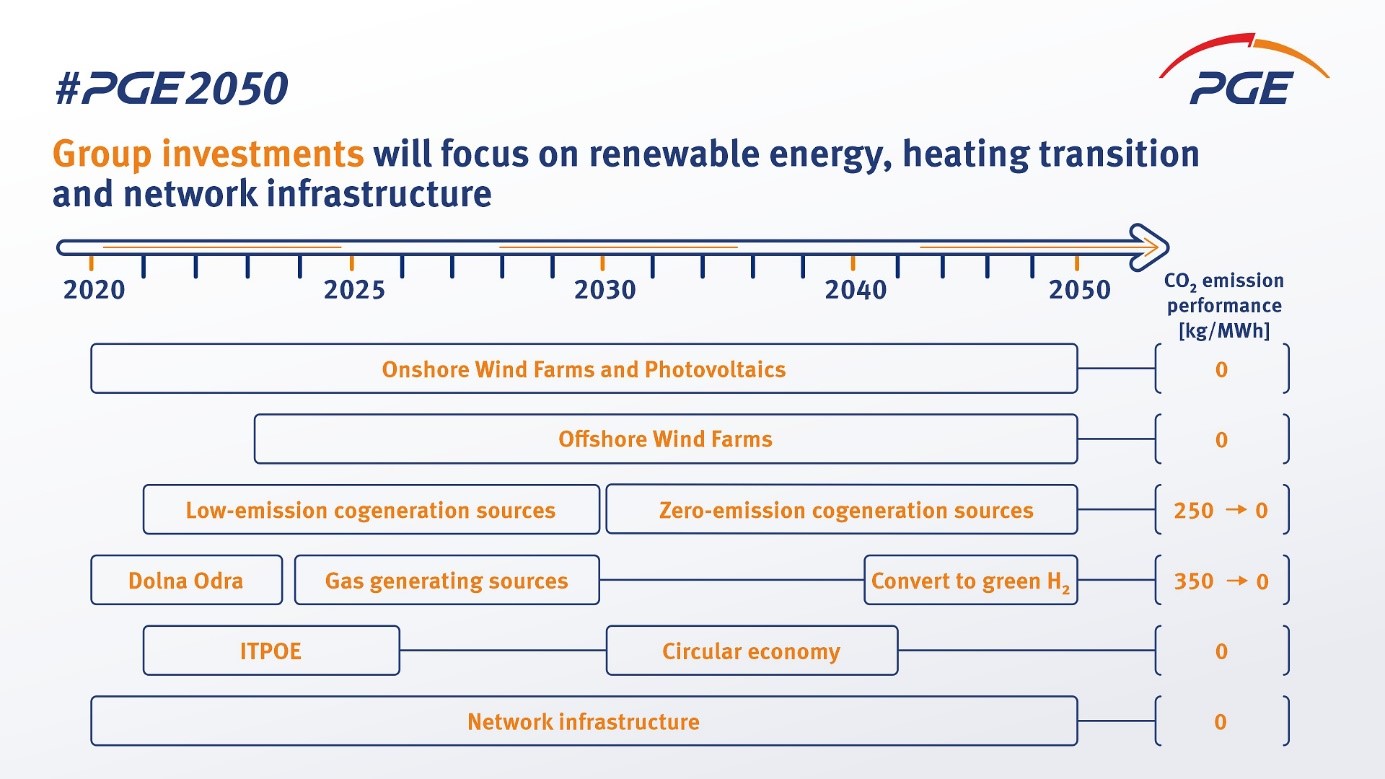 However, in case of financial means for the energy transition from the financial markets, we can identify the possible obstacles set up by the sustainable finance regulation (the so called Taxonomy Regulation). The main idea behind the Taxonomy Regulation is picking which technologies can be regarded as sustainable from an environmental perspective and which cannot. This is especially an issue in case of gas and nuclear energy as the European Commission will decide in delegated acts whether or not these technologies will be regarded as sustainable.

Linking the EU funds to the Taxonomy Regulation will also undermine the transformation effort as investments in technologies which will not be regarded as sustainable won’t be able to secure EU funding. This in turn will increase the costs of the energy transformation and significantly hamper the energy transition. It will also impede the deployment of renewables as technologies guaranteeing the stability and security of the European grids and thus enabling the very integration of renewable energy in the system, will be much harder to deploy.

We do agree that investment transparency is important and absolutely support the idea of sustainable finance as all investments to be implemented by PGE are to have a positive environmental impact. We would be very pleased to show off this impact to financial institutions, especially considering the market potential of sustainable finance. However, the taxonomy should take into account the regional specificity. For example, in the Polish energy system, where gas capacities have not been so far developed on a larger scale, the role of natural gas as a transition fuel is essential. In the long-term perspective, we can e.g. use hydrogen for this purpose in real terms. Nowadays, low-emission highly efficient gas units are to play an important role in stabilizing the electric system in times of growing intermittent RES sources and continuous decommissioning of coal units. Moreover, we are investing in switching coal generation of heat into natural gas. Resignation from individual coal stoves and promotion of system heating in the most developed heat distribution network in Europe that we have in Poland which contribute to significant improvement of air quality.  It will also allow us to reduce energy poverty. And real sustainability is when we do not forget about social aspects.