Fracking is a public health disaster. The US and Europe should say ‘No!’ 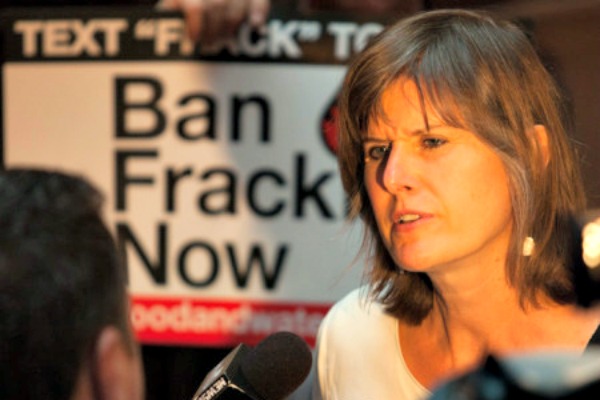 Multiple US studies now confirm the risks that shale gas poses to human health and the environment – and the recklessness of rushing to open new wells in Europe, argues Sandra Steingraber

Last week, I spoke at the European Commission’s New Environmentalism Summit and called for a European-wide moratorium on shale gas fracking.  Here’s why:

The emerging science from the United States—where this technology was born—shows that fracking is a slow-motion disaster for public health. To be sure, wheels of science grind slowly, especially compared to the gold-rush speed by which fracking has rolled over our landscape. Many uncertainties in the data thus remain.

Nevertheless, as drilling and fracking operations have spread from remote rural regions in the West to more populated eastern states, science is beginning to catch up. Consider that more studies on the health effects of fracking were published in the peer-review medical literature in the first four months of 2014 than in 2011 and 2012 combined. All together, these new studies carry an important warning for Europe, where population density is more than twice that of the United States.

We now know that fugitive methane wafts from every stage of the gas extraction, processing, and distribution process—and from all of the ancillary infrastructure along the way. Methane is a potent greenhouse gas, so making fracking a cause of – not a cure for – climate change.  Additionally, it combines with tailpipe exhaust to make smog. And exposure to smog contributes to costly, disabling health problems, including premature death, asthma, stroke, heart attack, and low birth weight.

The air pollutants generated from shale gas fracking operations also include carcinogenic silica dust, carginogenic radon, and benzene, a known cause of childhood leukemia. In some intensely fracked U.S. communities, studies have now been launched to investigate possible connections between fracking-related air pollutants and apparent increases in the rates of infant death and birth defects. There is no safe level of exposure to benzene.

Can these toxic emissions be halted by regulations? There is no evidence to say that it can and much evidence to the contrary.  Some of the innate risks of fracking arise from the engineering process itself. Wells can leak when their cement well casings age, shrink, and pull away from the surrounding rock.

Also, drilling and fracking itself appear to contribute to loss of well integrity. Drilling creates fractures in the surrounding rock that cement cannot completely fill and so opens pathways for the upward migration of gases. No regulations, no best practices can prevent this problem.

Investigations have confirmed water contamination in Pennsylvania, Ohio, West Virginia, and Texas. These contaminants include methane, radium, the arsenic, and multiple hormone-disrupting substances—so called endocrine disruptors.  This last discovery is especially worrisome because endocrine disruptors can sabotage human development at vanishingly low concentrations. As with benzene, there is no safe level of exposure.

On May 29, alarmed by growing evidence for harm across the United States in areas where fracking is practiced, more than 250 health organizations and individual health professionals sent a letter to Governor Andrew Cuomo that calls for a formal moratorium on fracking in New York State.

The Health and Environment Alliance (HEAL) has called for a moratorium on fracking throughout Europe on public health grounds. This not-for-profit representing more than 65 members is particularly concerned that European countries’ right to say “no” to fracking could be wiped out by the investor-state dispute resolution clause in the TTIP agreement, which is already being used in Canada to challenge the Quebec fracking moratorium.