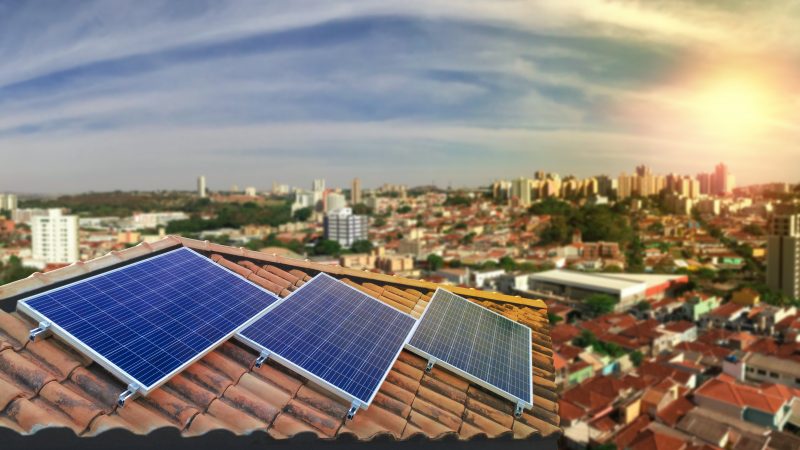 If one thing is clear from this crisis, it is time to double down on growing production capacity of renewable energy from the sun and wind, writes Dirk Vansintjan. [Andre Nery / Shutterstock]

An effective way to avoid being exposed to gas price volatility would be for the EU to produce its own renewable energy. This is where citizens and local communities come in, writes Dirk Vansintjan.

Dirk Vansintjan is president of REScoop, the European federation of citizen energy cooperatives.

If you’re an EU citizen, you – like me – will probably have felt a lump in your throat when you received your last electricity bills. Energy prices have been soaring all across Europe over the previous few months. For some of us, this represents somewhat of a significant inconvenience – for others, it means not being able to pay our electricity bills or going into debt.

Europe’s countries are highly dependent on fossil fuel exporters for their energy supply (gas makes up 32% of household final energy consumption, and the EU relies on imports for 96% and 89% of its crude oil and natural gas supply, respectively). Such reliance makes us vulnerable to electricity price fluctuations.

An effective way to avoid being exposed to such volatilities would be for the EU to produce its own renewable energy. Investment in projects generates profit and dividends and allows us greater decision-making autonomy (including electricity prices). However, investments in renewables are currently too low to meet our energy needs. Until we are independent of fossil fuels, there will be more energy crises.

The practical impact of all this is that citizens and businesses are suffering. Many energy suppliers have gone bust, forced to buy electricity on the market and sell it at a loss to their customers. This is why many other energy suppliers are now asking customers to compensate for higher electricity prices by raising their monthly bills, putting financial pressure on Europe’s households.

Consumers most affected by the current crisis are low-income households, although a middle-class segment also finds themselves highly affected. They don’t qualify for government aids but their incomes are only marginally above the threshold. As autumn turns to winter, many will face a Catch 22: go broke or go cold.

What needs to change…

Energy is not only an essential and strategic sector for the economy, but also for human dignity. Lack of energy access causes social exclusion and significant health risks, thus increasing social inequalities.

Naturally, governments have responded to this crisis. To address the immediate impacts of the crisis, the European Commission has released a toolbox of measures Member States can take.

These short-term measures are fine and good. The EU and national governments have a duty to safeguard energy as a basic human need.

Until now, the Commission’s approach to social impacts of climate policy has been more reactionary than proactive. The Just Energy Transition Fund was proposed as a response to calls from regions whose economies are suffering. France’s Yellow Vest Movement was triggered because of an increase in the price of automotive fuels resulting from a higher domestic consumption tax on energy products.

The Social Climate Fund was created as a band-aid response to the negative impacts of expanding the Emission Trading System to the buildings and transport sector. Such an approach is ultimately flawed and will likely lead to a lack of support, and distrust, by citizens towards decision-makers.

A just and renewable energy transition cannot be achieved if the most vulnerable keep falling victim to regressive policy measures. We should be designing policies to protect vulnerable social groups from negative impacts.

On the other hand, we need to reconsider where we send the bill for the energy transition. Currently, household and SME consumers largely pick up the bill for the energy transition compared to more significant industries through their energy bills or taxes. It would also help if the sector were required to contribute more fairly to national renewables support schemes.

If one thing is clear from this crisis, it is time to double down on the growing production capacity of renewable energy from the sun and wind.

This is where citizens and local communities come in. Europe’s citizens are primarily in favour of renewable energy, and local communities are keen to invest in renewable energy. According to a recent YouGov poll conducted in 10 countries, 61% of those surveyed said they would be likely to join an energy cooperative if one were set up in their area.

Local communities must be given the means to own their own renewable energy generation, not just as a tool for driving local social innovation but as a means to secure a clean energy supply for future crises.

Due to a higher level of engagement by the local citizens with the topic of energy (for instance, through outreach and education), energy communities trigger behavioural change, resulting in energy savings (including through citizen-led home renovations), and the trust built within an energy community empowers citizens to increasingly participate in flexibility and storage solutions.

No citizen should be locked in or left behind in an outdated energy system. Vulnerable groups should also enjoy the benefits of the energy transition. Here, community initiatives also have a solid role to play.

A growing number of energy communities focus on engaging vulnerable households, creating energy solidarity mechanisms between members, and addressing energy poverty. Currently, there is significant untapped potential to use energy communities as tools to make the energy transition more inclusive.

What we need from the EU and member states

All of this will not happen by itself. Member States need to fulfil their legal commitments to put in place enabling frameworks to promote the development of renewable energy communities and to adapt renewables support schemes so that communities can access them.

Moreover, the EU and Member states need to put in place supportive policies and measures to help energy communities become more active around energy efficiency and inclusiveness. If we want to leave no one behind in the Energy Transition, we must put citizens at the heart.