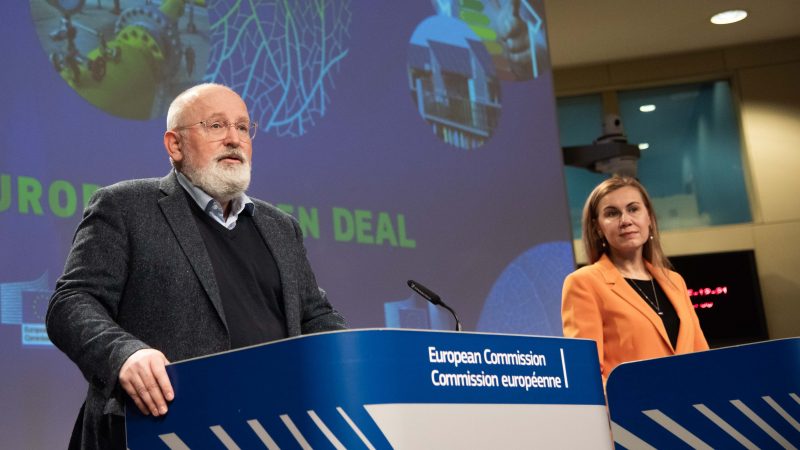 If the Commission’s idea is to bring Europeans along with the energy transition, creating gas citizen energy communities is not the way to do it. [Jennifer Jacquemart / EC Audiovisual Service]

In a package of legislation aimed at decarbonising gas, tabled in December, the European Commission introduced a new concept: gas citizen energy communities. But it’s a complex, unnecessary idea that could backfire, writes Josh Roberts.

When the Commission unveiled its legislative package to ‘decarbonise’ the gas market in December 2021, it left clean energy advocates feeling that industry wolves had just been gifted the keys to the henhouse.

One of the less talked about, and perhaps less understood, elements is the Commission’s proposal to ‘mirror’ the concept of citizen energy communities (CECs), originally from the Electricity Market Directive, in the Gas Directive.

Essentially, the Commission has proposed to duplicate the CEC concept for the gas sector.

The Commission’s objective is to promote the integration of biomethane into the wholesale gas market so that it can be supplied from rural to urban areas. The Commission sees energy communities as a vehicle to achieve this objective.

From the beginning, there has been no support for this mirroring exercise from the green NGO community. The Community Power Coalition – a European-wide network of civil society, associations of cooperatives, municipalities, local authorities, and allies from the renewable energy sector, wrote a letter to Kadri Simson, the Energy Commissioner, asking her not to go forward with the proposal.

The European Commission cannot be faulted for its support of community energy. Ever since its first Energy Union Strategy proclamation to put citizens at the core of the Energy Union, “where citizens take ownership of the energy transition”, the Commission has put its rhetoric into action.

In addition, energy communities were given a set of rights and member states were required to put in place a level playing field and enabling frameworks to ensure that they could develop at the national level.

But there are a number of reasons why mirroring CECs into the Gas Directive is a bad idea.

First, a gas energy community definition is not even needed. The Renewable Energy Directive already supports the promotion of biomethane as an activity for RECs, and this has just been reinforced with the new state aid guidelines on climate, environmental protection and energy (CEEAG).

Furthermore, in their transposition processes, member states have already been including renewable gas production and supply within the scope of activities RECs can undertake.

The problem of biomethane market integration is much bigger than just energy communities. In fact, as the Commission acknowledges in its own impact assessment the limited number of energy communities operational in renewable gas may actually be attributed to a variety of general and renewable gas-specific barriers.

Given current wholesale gas and electricity prices, and potential environmental downsides of transporting biomethane across large distances, it is highly questionable whether we should adapt an entire market framework just to give CECs the right to supply biomethane nationally.

Then there are the risks. Given the specific characteristics of the gas sector, there is a significant risk that duplicating the CEC definition in the Gas Directive will yield energy communities that are not consistent with the originally-intended concept.

Many large utilities like E.ON and Engie have been strategising on how to make energy communities relevant on a commercial scale so that they can market new services to customers.

If this sounds far-fetched, just take it from Eurogas, who included a supportive framework for energy communities in its list of asks for the Gas Directive Revision. This is somewhat ironic, given that large utilities were almost universally hostile to the inclusion of energy communities in the clean energy package.

Under the Commission’s proposal, gas incumbents would be free to join CECs, regardless of their size. Coupled with no requirements around autonomy and democratic decision making, it is a recipe for corporate capture and potential citizen washing.

We already have newspeak terms like ‘blue hydrogen’, ‘low carbon gases’ and ‘renewable fuels of non-biological origin’ to contend with. We don’t need to add energy communities to the list.

When weighing the pros and cons, it is hard to see how the added value of duplicating the gas energy communities concept in the Gas Directive is not substantially outweighed by the risks that the concept is perverted by market incumbents.

But there’s an even simpler reason why duplicating CECs in the Gas Directive is a bad idea: legal complexity. Ever since the clean energy package was finalized, the community energy movement has been working hard to arm citizens across Europe with knowledge and resources, and to make sure EU rules on energy communities are well written into national law.

After all, these concepts are rather new in many countries, particularly in Eastern Europe. Already, the transposition process has been slow and arduous. The translation of the community energy definitions has created a lot of legal complexity for national decision-makers across Europe.

Often, energy communities are confused with technical concepts like renewables collective self-consumption and energy sharing, even though they are inherently a social and organisational concept.

Mirroring the CEC definition in the gas directive would essentially add a third definition that needs to be written into 27 national laws. Member states would be receiving a political and legal signal that they need to create new frameworks for gas energy communities.

This would add another layer of complexity, all while we are still trying to operationalize the two original concepts. A new definition is the last thing we need right now.

The current climate, energy and geopolitical crises will push Europe to fully utilise the potential of local renewable energy sources, including biomethane. And if done correctly, biomethane production and supply can help contribute to a local circular economy.

But this does not require replicating CECs in the gas directive. If the Commission’s idea is to bring citizens along with the energy transition, this is not the way to do it.