Gazprom in Central and Eastern Europe: A long history of exploitation

The history of the relations between Gazprom and the Polish Oil and Gas Company (PGNiG) clearly shows that without severe penalty for Gazprom, gas markets in Poland and other CEE countries will not enjoy real competition.

From the point of view of Western traders and customers, gas markets in Europe are working just fine – free choice between long-term and spot contracts, diversified sources of gas (both pipeline and LNG), and intensive competition between the suppliers.

But if you happen to be a customer located east of Germany or Austria, the picture changes drastically. Due to the limited gas connections with other countries and dependency on a single supplier, gas markets in CEE countries are vulnerable to manifestations of market power by the dominant supplier – Gazprom.

In May 2004, ten countries, mostly from the CEE region, joined the EU. At the same time, Gazprom was striking its first bargain with DG COMP. In order to avoid fines, it had promised to remove destination clauses (prohibiting the resale of gas to other countries) from its contracts with Western clients (ENI, OMV, E.On.).

However, the same type of clauses were not removed from Gazprom’s long-term contracts with its CEE customers  until years later (i.e. in 2010 from PGNiG’s contract).

Destination clauses were not the only tool used by Gazprom to isolate CEE markets from each other and from the West. Thanks to shares in infrastructural undertakings (i.e. EuRoPol in Poland) or provisions of long-term contracts (Slovakia, Ukraine, Hungary), it prevented trade between those countries.

For example, when Gazprom cut off the supplies via Ukraine in January 2009, PGNiG could not purchase gas from anyone other than Gazprom – each attempt ended with the response that the potential supplier was unable to obtain “required documents,” which in practice meant Gazprom’s approval.

Gazprom has a long history of restricting supplies if the market does not respond “properly” to its demands (or threats). Since accession to the EU, supplies to Poland have been disrupted 6 times, sometimes without any prior warning, with disruptions lasting from 1 day up to 6 months.

Disruptions in 2006, 2009 and 2014/2015 also caused shortages of supply to Western Europe. However, in the case of Germany or Italy, those disruptions did not pose a threat to the security of supply – in the CEE they did. Please mind that Gazprom tends to first restrict supplies for the customers in the CEE and only later to its Western contractors.

Reliability of supplies is not the only way of discriminating against CEE customers vis-à-vis their Western counterparts. For many years, Gazprom has also used its dominant position to enforce much higher prices for its customers in the CEE than it could apply in Western Europe, on truly competitive markets. 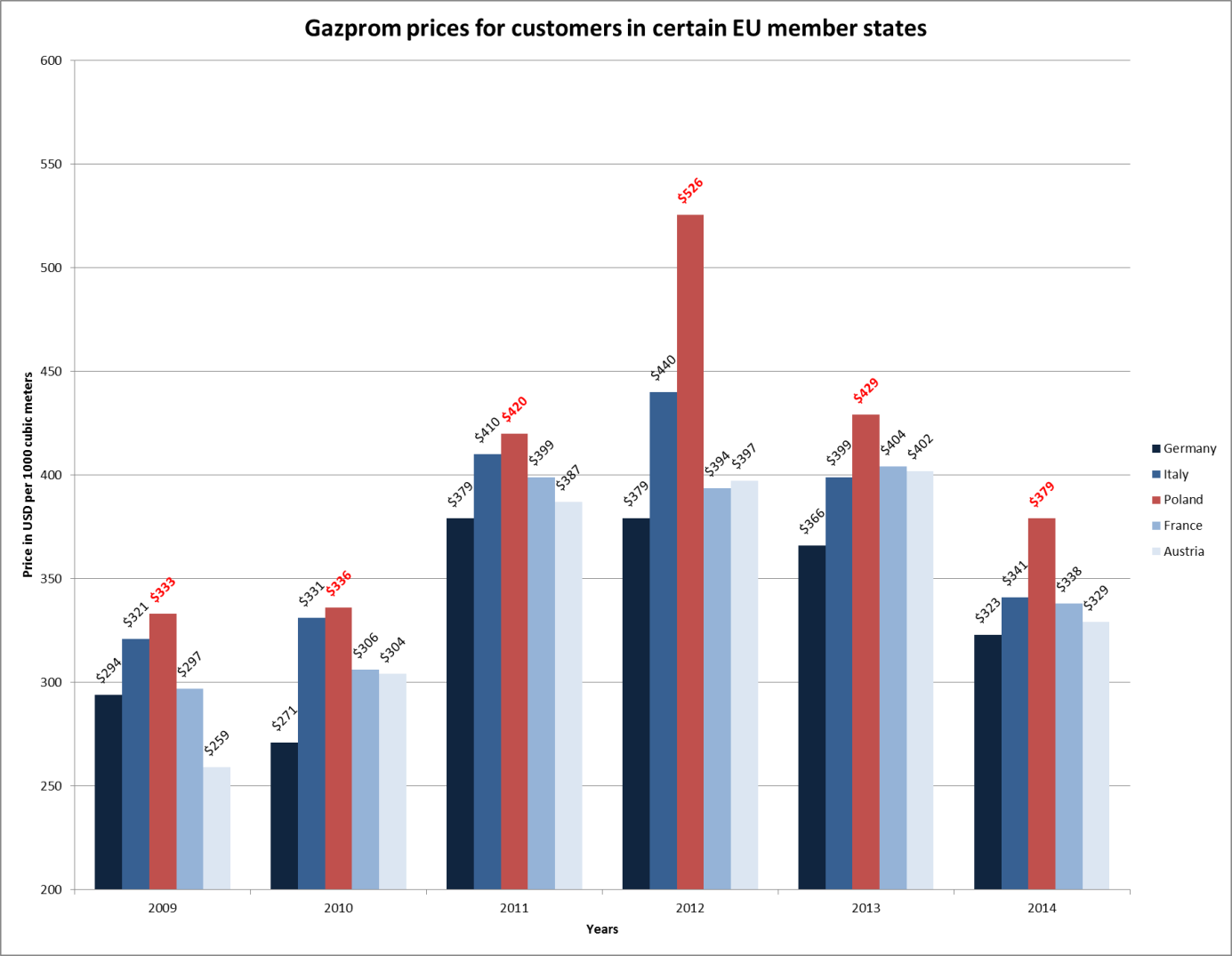 The data presented above clearly show that Gazprom divided the EU with a “gas curtain”, charging excessive prices for customers in countries that are in closer proximity to Russia and applying competitive prices only on markets where customers have a real choice of supplier.

It is even more striking when one compares the prices of the same gas delivered via the Yamal Pipeline for German customers and Polish customers, which at certain points in time differed by almost 150$(!!!) per 1000 cubic meters.

One can also easily see that even though market price fluctuates in time, the relation between the price that Polish customers must pay and the price for Western European consumers stays the same. Gazprom sets the price for Polish market to be the highest in the EU.

In 2009, Gazprom ceased supplies to Poland and other EU member states via Ukraine because of a dispute with its Ukrainian counterparts. Despite being politically responsible for the crisis and commercially and legally responsible for the breach of contract by RosUkrEnergo (a company controlled by Gazprom at that time), Gazprom failed to restore deliveries to PGNiG to their previous level, even after the dispute was settled.

Instead, it demanded concessions from the Polish side, including the power to veto any activity of the EuRoPol Gaz – a company governing the Polish section of the Yamal Pipeline (co-owned by Gazprom and PGNiG). In order to secure the supplies to its industry and households, Poland was forced to accept onerous terms imposed by Gazprom.

After obtaining veto power in EuRoPol Gaz and using its influence in Gascade (the operator of the German gas network to which Yamal Pipeline is connected), Gazprom delayed implementation of virtual and physical reverse flow on the Yamal Pipeline in order to further isolate the Polish market and impose excessive prices.

Gazprom has also been blocking the introduction of a reverse flow of gas between Slovakia and Ukraine, preventing EU gas traders from entering the Ukrainian market.

A need for the EU Commission’s intervention

All the facts described above are very well known to the  Commission. The Commission participated in talks concerning supplies to Poland in 2009-2010 and talks concerning reverse flow from Slovakia. The scale of Gazprom’s anti-competitive actions caused the commencement of the antitrust investigation in 2012 which was followed, in 2015, by issuing formal charges of abuse of Gazprom’s monopolistic position in the CEE.

The history of the relations between PGNiG and Gazprom clearly shows that the latter is not going to comply with the competition law, unless forced to. Therefore, only firm action by the Commission can stop still-lasting abuses and remove their anti-competitive effects. Only adopting the Commission’s decision declaring infringement and imposing fine together with effective remedies will allow to achieve those goals.

However, by initially accepting Gazprom’s commitments in March this year, the Commission has chosen a path of settlement, which – if pursued – will allow Gazprom to get away without facing the consequences and changing its anti-competitive behaviour. As the following articles will show, Gazprom commitments are by their very nature incapable of restoring competition in CEE countries.