Greek fires: Blaming climate change is only the start, phasing out fossil fuels is the rest 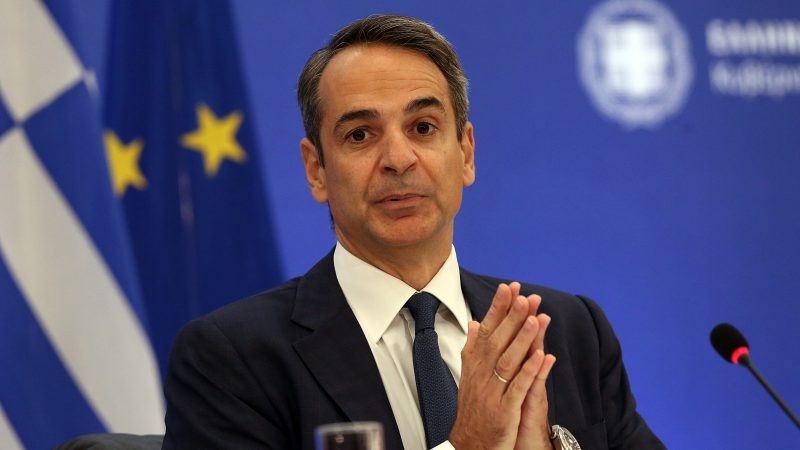 Greek Prime Minister Kyriakos Mitsotakis addresses journalists during a press conference on the developments with the wildfires of the previous days all over the country, in Athens, Greece, 12 Augusts 2021. [EPA-EFE/ORESTIS PANAGIOTOU]

If Prime Minister Kyriakos Mitsotakis is to help save Greece – and the planet – from the climate emergency, the changes his government must make are dramatic, writes Jonathan Gant.

On August the 5th, with wildfires ravaging Greece, Prime Minister Kyriakos Mitsotakis made plain what his country was facing. The fires, he stated, were “the reality of climate change.”

One week later, with an area larger than Barcelona, Berlin, and Paris together reduced to cinders – the prime minister followed up with a pledge. “The climate crisis is here and it shows us that everything needs to change,” he said, “From the orientation of the economy, to the energy policy.”

A powerful promise, but if Prime Minister Mitsotakis is to help save Greece – and the planet – from the climate emergency, the changes his government must make are dramatic indeed.

For Greece has become one of Europe’s staunchest defenders of immense fossil gas infrastructure projects, a stance its Brussels representatives must change when negotiating upcoming EU energy legislation.

Greece’s recent wildfires have been devastating, and the cost of rebuilding will be in the billions. But as people from Germany to Italy can attest, extreme weather events are the new normal in today’s climate emergency.

In Greece, more homes and forests will be at risk of fire, as will the country’s world-class cultural and natural heritage sites – beloved worldwide and so critical to the country’s economy.

It is still possible to avoid the worst impacts of the climate crisis. According to the Intergovernmental Panel on Climate Change, we can limit the increase in global temperatures to 1.5°C – the point beyond which the worst effects will occur – if we dramatically reduce our carbon emissions.

For Europe, this means ending its reliance on fossil gas, which is the EU’s second largest source of carbon emissions, even greater than those from coal. According to European Commission estimates, the EU must reduce gas use by 90% over the next 30 years to meet its climate targets.

To date, the government of Prime Minister Mitsotakis has not backed EU efforts to reduce its gas dependency. To the contrary, Energy Minister Kostas Skrekas has used European Council negotiations to argue the EU should support large gas projects like pipelines after the Commission proposed dropping them from the so-called TEN-E regulation.

TEN-E, or the Trans-European Networks for Energy regulation, governs the selection of large energy projects to be fast-tracked and publicly funded. During the Energy Council’s June TEN-E debate, Minister Skrekas also pushed for money to retrofit gas pipelines so they could transport a mixture of gas and hydrogen.

Such “blending” will continue Europe’s reliance on gas for decades longer than it can afford.

Perhaps most remarkable has been Greece’s support for particular fossil fuel projects. In March, the government issued €100 million in support for the oil driller Energean, which holds one of Greece’s dozen offshore oil and gas licenses.

The prime minister has personally backed a new gas import terminal in the city of Alexandroupolis. And Greece has lobbied for continued EU support for the proposed EastMed gas pipeline from Israel to Cyprus and Greece.

Thanks to efforts by Greece and Cyprus, the EU may provide political and financial support for EastMed even if it stops backing other gas projects under a revised TEN-E regulation.

The government’s push for gas comes in the context of its pledges to phase out coal. But replacing one fossil fuel with another will only lock Greece and Europe into further decades of carbon emissions.

Europe will need to have virtually eliminated its carbon emissions within the lifetimes of the Alexandroupolis terminal and EastMed.

In addition, the science shows that gas only emits fewer greenhouse gases than coal if methane leakage rates are low, while transporting and burning gas still produces enough carbon and methane to wreak havoc on the climate.

Building new gas infrastructure also comes at a great economic cost that the Greek people cannot afford. For EastMed alone, taxpayers would be responsible for a third of the project’s €7 billion budget.

At a time when renewable energy sources are now cheaper than fossil fuels, this money could be used to fund real solutions to the energy poverty crisis faced by so many in Greece, such as generating renewable energy and retrofitting buildings.

This summer’s wildfires and floods have shown what Greece, and much of Europe, will have to face as the climate crisis worsens. Now the Greek government can show the world what true climate leadership means, turning rhetoric into reality and ending its support for fossil fuel projects.

In doing so prime minister Mitsotakis can make the change he has promised, become the climate leader we need, and protect the future of both Greece and Europe.