By Davide Sabbadin and Melissa Zill 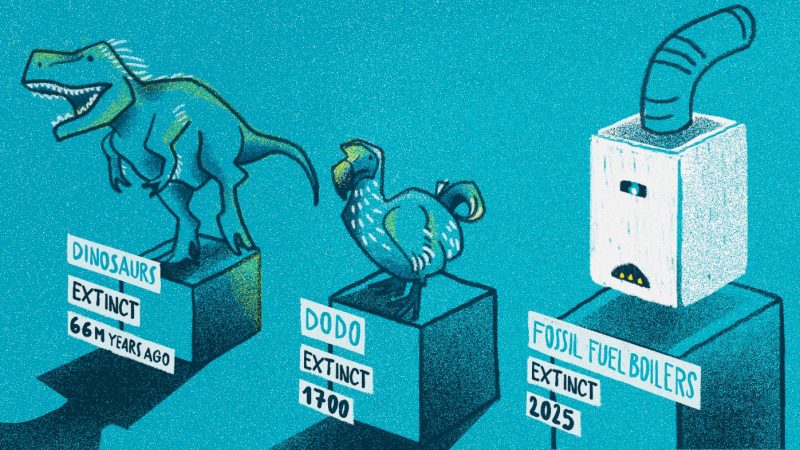 It wasn’t long ago that we stopped burning wood to cook our food because we realised how bad it was for our health and forests. Just like we knew that back then, we know today that fossil fuel boilers are undermining the EU’s plans for a safe and climate-neutral Europe, , write Davide Sabbadin and Mélissa Zill. [European Environmental Bureau (EEB)]

A handful of leading manufacturers of heating systems are paving the way for clean heating, showing that ditching fossil fuel boilers is not only possible but also financially desirable, write Davide Sabbadin and Mélissa Zill.

Davide Sabbadin is a policy officer at the European Environmental Bureau (EEB). Mélissa Zill is Programme Manager at ECOS. Together with leading manufacturers Abora Solar and Janus Energy, they are calling on EU governments and institutions to boost support for climate-neutral heating systems.

The rumbling sound of gas boilers has been a constant feature of European homes for decades, but their days might be numbered.

It wasn’t long ago that we stopped burning wood to cook our food because we realised how bad it was for our health and forests. Just like we knew that back then, we know today that fossil fuel boilers are undermining the EU’s plans for a safe and climate-neutral Europe.

With this in mind, governments are considering a gradual phase-out of gas boilers, in line with the need to reduce greenhouse gas emissions from buildings by 60% before 2030.

Yet, time is running out, as more than 75% of the energy produced for domestic heating in Europe is still coming from fossil fuels (gas, oil and coal).

But beyond the necessary legislative action, many Europeans who still rely on gas or oil boilers wonder what the future of clean heating will look like. The answer can be found today in a growing number of homes: heat pumps and solar-based heating systems.

Heating systems have for many years been at odds with climate action.

The International Energy Agency recently confirmed that we will not reach climate neutrality by 2050 if we do not ban fossil fuel heaters by 2025.

Thankfully, progress in the uptake of renewables and heat pumps, the promise by the EU to renovate millions of  Europe’s ageing buildings, and the contribution of district heating in sustainable urban planning, are now paving the way for a sustainable future in the heating sector.

Leading the transition towards climate-neutral heating are a handful of companies from different countries already doing their part for the planet without waiting for legislation, as an independent brand audit showed recently.

While most manufacturers in Europe are yet to disclose their climate neutrality plans, these industry climate leaders are now already manufacturing and selling clean heating technologies only. They are the frontrunners of the rapidly growing market of electric heat pumps and solar thermal systems.

The brand audit report – commissioned by the European Environmental Bureau (EEB) on behalf of the Coolproducts campaign – shows that most of the companies that responded to the survey would support a ban for gas boilers should the EU institutions propose one. The audit also found overwhelming support among respondents for an immediate end of subsidies incentivising the uptake of fossil-fuel technologies.

In other words, the heating industry in Europe envisions a future free of fossil fuels.

Nevertheless, the longer heating companies delay the phase-out of fossil gas and inefficient heating systems, the more costly the transition will be.

An EU committed to carbon-neutral heating

Beyond the ban of current gas boilers, the EU has the necessary tools at its disposal to ensure that all Europeans can benefit from clean alternatives.

The EU’s Renovation Wave Strategy, which aims “to at least double the annual energy renovation rate of buildings by 2030 and to foster deep energy renovations”, is a good first step to green European homes and public buildings, where insulation rates are still low.

In addition to building renovations, it’s crucial that governments also support the installation of clean heating systems for those households and countries where this technology is less affordable.

According to a recent analysis, most ‘green’ subsidy schemes across Europe are currently used to promote the installation of new fossil gas boilers, rather than heat pumps and solar thermal systems. As a result of inadequate state support, a gas boiler may initially cost three times less than a heat pump, despite its higher cost in the long run. Support schemes should be tailored around real life conditions performances: they should promote  the most efficient, zero-emissions mix of technologies, such as heat pumps and solar thermal.

As the electricity mix is rapidly switching to renewables, shifting those subsidies away from fossil fuels and onto climate-neutral technologies will serve as a key incentive for both companies and people, thus boosting Europe’s clean energy transition.

Manufacturers and institutions need to walk the talk on climate action. Given the enormous carbon footprint of fossil fuel boilers, solar thermal systems and heat pumps are the only technologies available to keep heating our homes without warming up the planet.