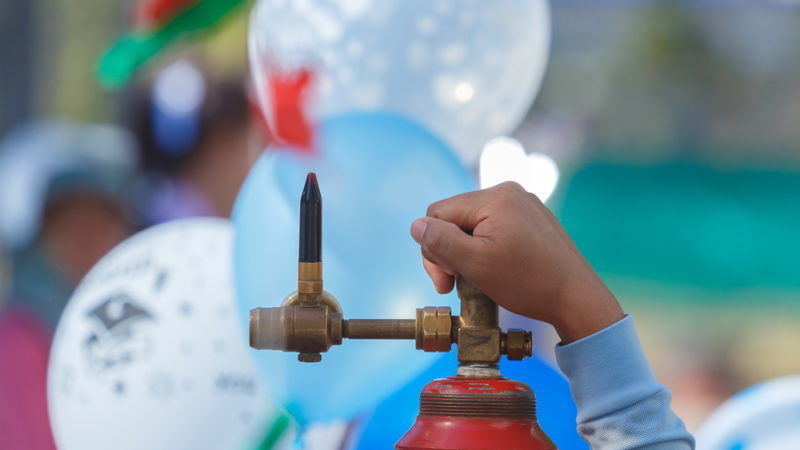 Helium is about much more than balloons and squeaky voices. Its uses in medicine and military applications are vital but Europe risks finding itself between a rock and a hard place in securing a regular supply, writes Lukas Trakimavičius.

Lukas Trakimavičius is an intern in the Energy Security Section of NATO’s Emerging Security Challenges Division. The views expressed in this article are the author’s own and are contributed in a purely personal capacity.

Last June, the diplomatic spat between Qatar and the rest of the Gulf countries sparked fears across the globe that it could affect Doha’s capacity to satisfy the world’s natural gas demand.

But angst over natural gas supplies overshadowed the fact that almost overnight nearly 32% of the world’s helium supplies went offline. Although helium exports were resumed one month later and any significant damage to the consumers was averted, it highlighted the precariousness of the global helium market.

This is of great concern because the shifting supply and demand dynamics of the global helium market can in the near future undermine the resource security of Europe.

Big, brightly coloured balloons and squeaky voices at birthday parties is probably what most people associate helium with. But there is much more than that to this noble gas.

Due to its unique chemical properties, helium is widely used in medicine, welding, cryogenics, high-tech manufacturing and laboratory experiments.

More importantly, the element is very important for the military industry because it is essential for rocketry and the production of advanced military equipment. Unsurprisingly, the United States military accounts for around one fifth of the country’s entire helium demand.

Although at current consumption rates there are enough helium supplies in the world to last for over a hundred years, its production is concentrated only in a handful of countries.

The US is by far the largest producer of helium as it accounts for 55% of the world’s supply, Qatar and Algeria for 32 and 6%, respectively, and the rest of the world accounts for around 7%.

At the same time, the US is also the world’s largest consumer of helium, constituting around 42% of the world’s demand, followed by the Europe with around 20%.

However, unlike the US, Europe is almost entirely reliant on imports from abroad. For instance, in 2016, the European Union imported 32% of its helium from the US and Qatar, 21% from Algeria and the remaining 15% from other countries, including the United Arab Emirates and Russia.

While superficially these statistics do not raise any immediate red flags, a more in-depth look suggests that if there won’t be any major changes to the current supply and demand dynamics, in the near future, Europe might end up between a rock and a hard place.

First, the demand for helium is expected to increase. In 2016, global demand for helium stood at around 180 million cubic metres (MCM), but in 2021 it will likely rise to almost 200 MCM. Most of the growth will come from India, China and other Asian countries that are experiencing rapid economic development and whose industries are moving towards more high-tech areas.

Second, the global helium supply will in the upcoming years undergo some radical changes. In 2021, the world’s helium production will dip because the US-based Federal Helium Reserve, which is currently responsible for approximately 30% of the world’s total supply, is scheduled to be closed.

This, in turn, will potentially transform the US from a helium exporter to an importer country. Also, the “shale gas revolution” will likely have a limited impact on the US capacity to produce helium because in contrast to regular natural gas reserves, shale gas contains only infinitesimally small quantities of helium, which easily escape from the porous shale formations.

One of the few countries that have substantial plans to flood the market with helium supplies is Russia.

By the early 2020s, the Russian state-owned energy giant Gazprom plans to open the Amur gas processing plant in Siberia, which is poised to become not only one of the largest natural gas, but also helium extraction facilities in the world. Once fully operational, the facility will increase the country’s helium output by 60 MCM and transform Russia into a major exporter.

As a result of these changing supply and demand dynamics, the helium market will likely tighten up, increase Europe’s dependency on a very low number of countries for its helium imports and increase competition with emerging Asian countries over the available resources.

Granted, the problem with helium is not that we will run out of it anytime soon but rather the fact that its upstream side is very weak. Helium extraction is seldom economical without natural gas production and even with natural gas production companies are rarely concerned with this task as the profit margin tends to be very low.

That is why most of the helium in natural gas processing facilities is wasted as it gets released into thin air.

In sum, changes within the global helium market will in the near future have strategic implications for resource constrained regions like Europe. The growing demand for helium in Asia, the decreased output in the US and the emergence of Russia as a net producer will alter old partnerships and create new dependencies.

While Europe could opt for the easiest way out and hope that market forces will address future imbalances and result in a more diversified basket of helium supplies, this is hardly enough.

Given the importance of helium for scientific research, medicine and the military industry, Europe should work towards ensuring a resilient supply chain policy for this noblest of the gasses before a more powerful shock than that of the Qatar crisis would knock it off balance.