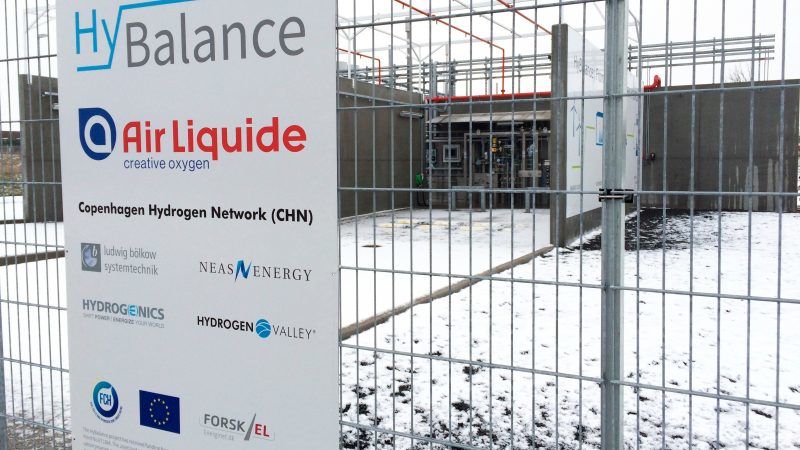 HyBalance, a pilot site for the production of carbon-free hydrogen, was inaugurated just a few days ago in Denmark. [HyBalance]

Jeppe Kofod is the leader of the Danish Social Democrats and vice-president of the Socialist and Democrats (S&D) group in the European Parliament. He is president of EUFORES, a European cross-party network of parliamentarians, academics, businesses and NGOs whose objective is to promote renewable energy and energy efficiency.

Earlier this year, in the European Parliament, we agreed ambitious targets for renewables and energy efficiency. An important step in securing Europe’s role as a leader in the green revolution.

With those files behind us, now is the time to look to other areas. Today, one-third of global energy-related emissions come from sectors and industries for which there is still no economically viable alternative to fossil fuels. Being ambitious for a carbon-neutral future means that it is a key priority for policymakers to turn their attention to those industries, and support developments of new alternatives.

That is why I call for renewed commitment to start searching for serious alternatives when Europe’s energy ministers gather in Austria for their informal meeting this week. Alternatives that can give us efficient, safe and clean energy – and in the end European industries that are more efficient, cleaner and more sustainable.

One of the alternatives to consider is green hydrogen. A technology that can help us in reaching those sectors that are difficult to initially decarbonise through electrification.

Right now, Europe is a world leader in a number of key fuel cell and hydrogen technology areas, one of which is the production of green hydrogen. In my home country Denmark, HyBalance, a pilot site for the production of carbon-free hydrogen, was inaugurated just a few days ago.

Here, hydrogen will be produced from water electrolysis, enabling the storage of cheap renewable electricity from those wind turbines that Denmark has become known for. If working well, it will help balance the grid and enable the integration of more renewable energy into our electricity systems.

During their meeting in Linz, energy ministers won’t be far from the European flagship project, H2Futures, that is bringing together European industrial players to build an experimental facility to produce carbon-free hydrogen with the ultimate aim of producing ‘green steel’. A project with the ambitious goal of replacing coal in the production of steel.

Endeavours like these show that we as political leaders, by setting a political direction, can support the best ideas and technologies out there. For example, by supporting the work of the Fuel Cells and Hydrogen Joint Undertaking.

Of course, this is a long-term project – greening our heavy industries will not happen overnight. But it’s a necessary step on the way. In order to take that step, and to go even further, European energy ministers need to increase their ambitions, if they are going to live up to the promises the leaders of our continent made three years ago in Paris.

In Europe and around the world, the future stability and prosperity of our communities depends largely on how well we can regulate energy production and consumption – to the end of limiting global warming.

This means not just leaving coal in the ground or producing emissions-free steel, but it means also decarbonising transport, optimising energy efficiency and ensuring that all energy we do use comes from renewable sources.

Europe needs a true energy and climate union. One where the research and innovation needed to transform our energy systems is supported, and we as politicians enable the necessary investments. Only in doing so will we be able to minimise the impact of climate change, safeguard sustainable growth and secure our planet for the future.