The rationale behind this call is the theoretical estimates of Ecodesign and Labelling measures’ contribution to the EU 2020 climate and energy targets. Unfortunately, energy savings resulting from the combined Ecodesign and labelling Directives are, without doubt, lower than expected. We may have to water-down the success-story we keep telling EU consumers about our product policies.

The energy testing of televisions conducted by Natural Resource Defence Council (NRDC) in the US confirmed what experts on product policy already know. The real energy consumption of TVs is much higher in real-world usage than the one reported on the label (up to 45% based on the US televisions tested). And the same applies to many other household appliances and equipment.

With no surprise, manufacturers refuse the allegations of cheating consumers. And they may often be right! And here the discussion on real and declared efficiency gets messy.

Manufacturers do not often “cheat” consumers as such. They typically just take advantage of the existing legal loopholes in the legislation. Especially if these loopholes are kept in place when legislation is revised. But to be quite clear: there is also outright cheating, as illustrated by Volkswagen’s diesel emission scandal, and most likely with the US televisions described above. 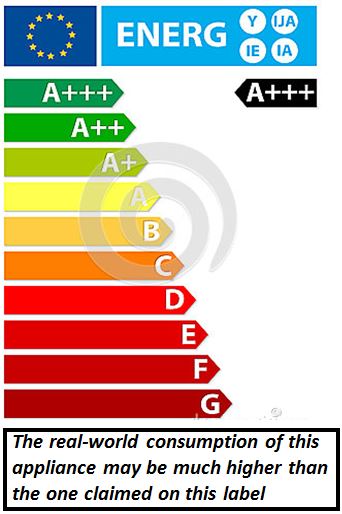 Let’s look at the “legal cheating”: EU consumers are familiar with energy consumption labels on their appliances (See figure, left). Ratings are often touted as selling points when comparing brands and models. Consumers look at them when selecting a washer machine or new water heater, to list some of the most common home articles. In theory, the better the energy class is the less energy consuming is the selected product.

The first major gap in product policies relates to testing procedures. Test conditions, agreed on by manufacturers, usually do not reflect real consumer usage conditions. To justify this, manufacturers argue that the way appliances are used vary from household to household. Therefore, industry defines the supposedly “standard” test conditions.

Fair enough! But what about the recent agreement to test refrigerators completely empty with the door closed? Is this a variation of consumer usage? At what point will our policy-makers consider “standard” test conditions defined by manufacturers unacceptable for regulation purposes?

Here the argument is simple: it is impossible to have exactly the same testing conditions when using different laboratories. Instead of requiring laboratories to conduct regular Round Robin testing (and make laboratories adjusting their installations) policy-makers offer industry another gift; the so-called verification tolerance. This tolerance is as much as 20% for some characteristics! Market Surveillance authorities have to consider the agreed tolerance “level” with industry when testing regulated products.

The most advantageous gift to shady industrial players and the largest burden for those who want to play by the rules is probably the lack of an effective EU wide market surveillance.  Now we touch on the real cheating: It is the responsibility of member states to undertake enforcement.

Thus, under the Ecodesign and Labelling Directives, market surveillance should be conducted at national level. Member states are to make sure they have the necessary resources to “organise appropriate checks on product compliance, on an adequate scale, and oblige manufacturers to recall non-compliant products”.

This looks good on paper. In practice, only a few member states conduct (on a random basis) verification tests.  Thus, only a few non-compliant products are getting caught.

We should question ourselves whether it makes sense to rely on member states for enforcement.  Does the national responsibility make sense as the EU is one single market and products are freely traded inside the EU?

If these loopholes are not addressed in the Commission proposal for Ecodesign and Labelling directives and if enforcement does not become more effective, I would recommend policy-makers at least make it clear to consumers. They should be informed that real energy consumption may be much higher than the one claimed on the product label.

How Ecodesign could actually foster innovation is also unclear. Minimum energy performance requirements are set, like in other OECD countries except for Japan, based on the “Least Life Cycle cost” instead of the efficiency level of the Best Available Technology.

In other words, there is no need to innovate. To make the situation worse, by the time of the implementation of the agreed upon requirements (usually four years later in Europe) the efficiency level in the market has already moved on.

Beyond the number of regulated products, the Commission proposal of Ecodesign and Labelling directives should foster innovation and lead to a clear appliance labelling and honest efficiency levels. These efficiency levels should be based on usage conditions and the zero-tolerance principle. That’s the only way to keep Europe competitive and deliver a citizen centred energy transition!