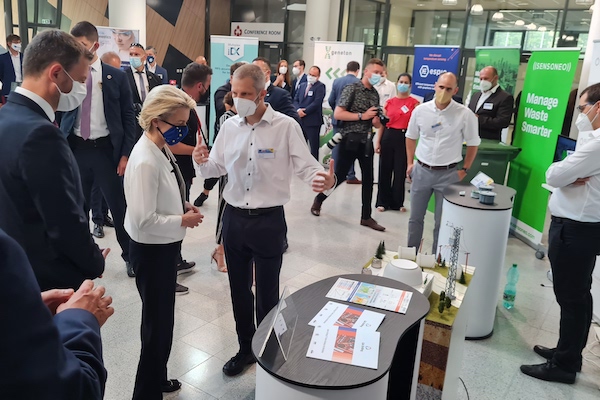 The decision of the President of the European Commission to personally deliver the Commission’s assessment of the national recovery and resilience plans to all EU Member States is more than just a symbolic gesture. While the photo-ops with heads of governments cannot be underestimated, the tour gives Ursula von der Leyen a rare opportunity to talk to people who will shoulder most of the weight of the responsibility for the tangible outcomes of green and digital transition the EU is planning to achieve.

For this transition, renewable energy is of utmost importance. The political ambition of the Commission to stimulate the 38-40 % increase of renewables in the European energy mix is laudable. But to maintain the stability of the grid, reliable sources of clean, baseload energy are needed to complement solar and wind.

The successful deployment and scaling of new energy sources depend on world-class research and development stimulated by visionary public investment and good regulation that shapes the markets to build future resilience. As Ms. von der Leyen learned during her visit at the Comenius University in Bratislava Science Park, GA Drilling has a solution ready to be tested in real-life conditions that will soon unlock vast renewable 24/7 source of clean energy and contribute to achieving Paris Climate Goals in time.

“I am really glad that I had the opportunity to talk to Ms. von der Leyen about how the PLASMABIT drill head developed by GA Drilling is the enabler of geothermal energy on global scale. It is ideal for big-scale retrofit of coal plants and nuclear plants almost anywhere. Once deployed, it will make Europe lead the way in the global green transition,” said Igor Kočiš, CEO of GA Drilling, after presenting the novel solution to President von der Leyen and Vice-President Maroš Šefčovič.

Geothermal energy is the essential answer to the current global de-carbonization challenge. The exploitation of ultra-deep geothermal energy not only gives access to unlimited power but can also be very financially attractive. The reason is that water of 300+°C in depths contains five times more energy as water at 200°C in a shallower geothermal well. A major obstacle to deeper drilling has been the exponential cost of drilling beyond five kilometres, making the project unattractive since the consumer price of the power can no longer compete with other resources.

GA Drilling has developed its patented plasma-based technology for faster and thus more cost-effective drilling through hard rock to access deep and ultra-deep geothermal energy. It offers the opportunity to tap cheap, clean energy on demand anywhere and delivers incremental environmental benefits. The adoption of this game-changing innovative solution will be profitable for state economics, energy providers as well as consumers.