Living with nuclear power plants at your border

By Charlotte Mijeon and Horst Hamm 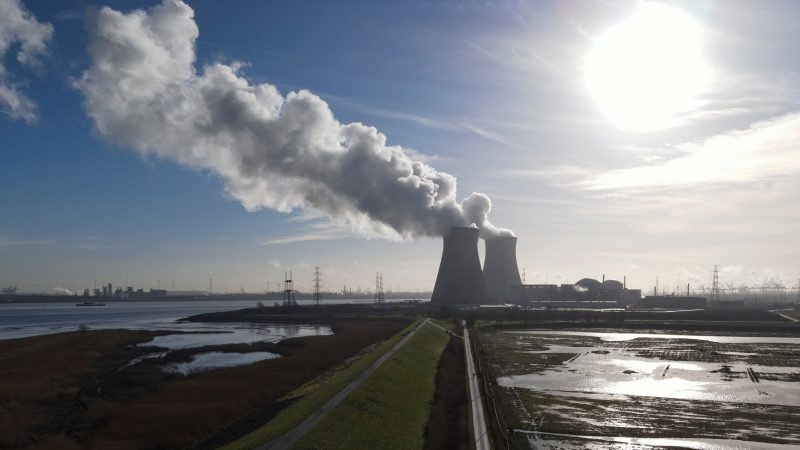 The nuclear industry’s announced renaissance to “save the climate” would mean building 600 to 700 new reactors worldwide, significantly increasing the risk of an incident with cross-border implications, write Horst Hamm and Charlotte Migeon.

Horst Hamm was editor of the German monthly magazine Natur from 1996 to 2014. Since 2015 he has been working for the Nuclear Free Future Foundation. Charlotte Mijeon is the spokesperson for the French network Sortir du nucléaire (leaving nuclear).

There is a major discrepancy between energy policy, a matter of national sovereignty, and the disproportionate cross-border impacts of nuclear power. The most eloquent illustration of this is the famous Chernobyl disaster. Following the meltdown of reactor 4 at the Ukrainian power plant, a radioactive cloud passed through half of Europe. More than 35 years later, exposure to caesium 137 is still a significant problem in southern Germany. Traces of radioactivity of varying degrees are still present in the top layer of forest and grassland soil and can be found in the animals that eat it.

The Munich Environmental Institute has found that wild boar meat is often highly contaminated. The consumption of 6 kilograms of meat contains 3000 becquerels per kilogram (Bq/Kg) of caesium-137 and results in a radiation dose equivalent to 12 lung x-rays. Meat with 600 Bq/kg or more must be thrown away; however, it is often sold without being tested.

Munich is 1374 kilometres away from Chernobyl, showing the dangers posed by nuclear power plants are not limited to their immediate vicinity. But the shorter the distance, the greater the danger. There are still 443 running nuclear reactors globally, 126 of which are in Europe. These include the Belgian reactors Doel 1 and 2 and Tihange 1, due to be shut down in 2015 having reached the end of their working life.

“Despite repeated incidents and thousands of cracks in the reactors’ pressure vessels, the Belgian government has finally decided to extend their operating life until 2025,” laments the Bund für Umwelt und Naturschutz Deutschland (BUND), despite the Belgian Constitutional Court warning this extension had not been subject to an environmental impact assessment.

The Biosphere Institute’s revealing analyses of risks of dispersion throughout Europe show numerous and significant impacts on the environment. To those, we must add often-underestimated implications of the exploitation of uranium mines. Nuclear electricity leads to pollution in foreign territories, which underlines an all-too-familiar asymmetrical relationship.

The vast majority of these operations happen in Africa and Central Asia, or when in developed countries, are located on the territories of indigenous peoples (Canada, Australia). Several fossil water tables, which are not regenerated by rain, have been contaminated for several decades in Niger.

Fuel reprocessing also has a usually overlooked impact (98% of radioelement discharges from the whole sector). La Hague’s treatment centre is responsible for the largest sea discharges in Europe. What caused a scandal in Fukushima – dumping contaminated water – happens every day in the heart of the EU. Traces of this pollution can be found as far away as Denmark, which ironically chose to give up nuclear power.

Water use is also one of the Achilles heels of nuclear power, as shown by the shutdown of the French Chooz nuclear plant in September 2020 to avoid excessive water withdrawals in the Meuse river. The same is true for the planned power plant in Jizzakh (Uzbekistan). It would emit 88,000 cubic metres of wastewater annually and directly threaten the Aydar-Arnasay freshwater lake system – a site of international importance under the Ramsar Convention on Wetlands.

It would also significantly harm the already scarce water supplies in neighbouring Kazakhstan and Tajikistan. Khujand, Tajikistan’s second-largest city, is only 200 km away. Despite strong opposition from local and neighbouring communities, the Uzbek government stubbornly insists on building those reactors – considered to have significant design and safety flaws by the European Nuclear Safety Regulators Group (ENSREG).

From the extraction of resources to the conservation of waste, the whole nuclear cycle requires stable political and societal conditions. However, on the historical scale, peace in Europe is an exception. Therefore, it is legitimate to wonder whether the current conditions will persist throughout the 21st century. This is a real civilisational issue since waste will remain dangerous for periods possibly lasting longer than human civilisations.

The most recent example of conflict-related nuclear hazard happened in October 2020, when Azerbaijan threatened to bomb the Armenia Metsamor power plant. This act would have had catastrophic consequences for the region’s countries (Russia, Georgia, Turkey, Iran and even Azerbaijan).

Initiatives have sprung up across Europe to oppose new nuclear settlements along borders. The Austrian PLAGE (Platform against Nuclear Dangers), for example, points out that despite Austria voting against nuclear in a 1978 referendum, it is surrounded by reactors located between 40 and 180 kilometres from its border: Gundremmingungen C and Isar II (Germany), Temelin and Dukonavy (Czech Republic), Bohunice and Mochovce (Slovakia), Paks (Hungary), Krško (Slovenia), and Leibstadt, Beznau and Gösgen (Switzerland). Beznau 1 and 2, operating since 1969 and 1971, are run on an unlimited operating licence, causing the risk to increase every year. PLAGE also criticises existing European treaties, first and foremost EURATOM, under which all EU Members pay for nuclear research whether or not they operate plants.

Currently, the nuclear industry is announcing a renaissance to “save the climate”. According to the IAEA, 715 gigawatts of new nuclear power should be installed by 2050. This would mean building 600 to 700 new reactors, increasing the existing risk significantly and placing an economic burden on states deciding to re-nuclearise.

There has been no nuclear renaissance for decades – which has had dramatic financial consequences for the sector. The nuclear power plant constructor Westinghouse, historically the largest in the world, went bankrupt. The so-called “world market leader in nuclear energy”, Areva, had to be taken over by the French state to avoid insolvency after accumulating €10.5 billion in losses in six years. Entire national nuclear programmes have been cancelled or “suspended” for financial reasons – in Chile, Indonesia, Jordan, Lithuania, South Africa, Thailand and Vietnam.

Around the world, renewable energies are now significantly cheaper than nuclear power. In oil-rich Saudi Arabia, a 600-megawatt photovoltaic plant will provide electricity for 1.04-dollar cents – a world record for profitability. Meanwhile, nuclear energy costs at least ten times as much, and the burden of waste disposal and the risks of a nuclear accident are passed on to society.

2 responses to “Living with nuclear power plants at your border”