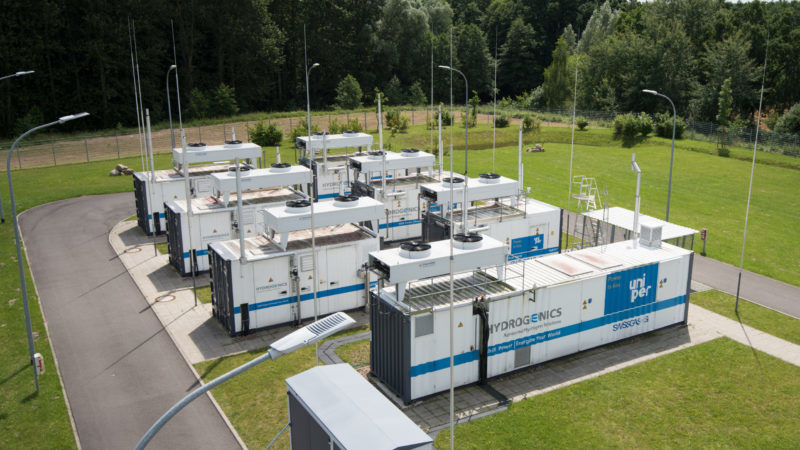 This article is part of our special report Renewable gas.

While the power generation (and partly the heating) sector has been undergoing change for many years, relatively little has been done in the transportation sector so far.

Politicians are now calling for a rapid switch to electric cars and some even call for a total electrification of the mobility sector. However, they underestimate significant challenges associated with such a scenario: in addition to expanding charging infrastructure, it will be extremely difficult to ensure the constant availability of large amounts of electricity to fuel a car.

The solution may be simpler: “green” hydrogen produced from renewable sources can be used to future-proof our economy and make it more environmentally friendly. This can be done with the “power-to-gas” process. It means using electricity generated from renewable energy sources to split water into hydrogen and oxygen (electrolysis). From a technical perspective, power-to-gas is ready to enter the market and enable rapid results for our climate.

The production of green hydrogen allows the use of renewable energy in new applications in various commercial sectors, which reduces CO2 emissions. The key word here is “sectorial integration”, e.g. green hydrogen can be used in the petroleum industry in refinery processes, thus replacing “grey” hydrogen produced from natural gas and crude oil.

Furthermore, green hydrogen can be used in the transport sector. Many automobile manufacturers are already developing fuel-cell vehicles. In rail transport, green hydrogen is considered as a zero-emission alternative fuel, with the first fuel-cell train due to begin trial operations in Germany next year.

But the power-to-gas technology can do even more. It is a “master key” to unlock the energy transition potential, enabling more efficient integration of intermittent power generated by wind and solar plants by decoupling production and consumption. Power grid constraints often lead to curtailment, and there is no way to use this surplus energy or store it for times of higher demand. Even the largest batteries can only help balance demand over the course of a few hours for a limited number of consumers. In 2015, almost five billion kilowatt hours of renewable energy were curtailed in Germany. This would have been enough to power a city the size of Hamburg for four months.

Power-to-gas offers a solution: using the process of methanation to convert green hydrogen into synthetic methane, which can be used on its own or blended with natural gas, in any energy sector. This synthetic natural gas can store green energy, not just for the short term but for any length of time, in a well-established system of natural gas infrastructure with networks and storage facilities already in place. This also solves the challenge of transportation from wind power production centres to areas of high demand – a lot of potential is unleashed when combining electricity and gas grids to a smart energy grid.

Given these excellent conditions, why do we not have more power-to-gas plants yet?

Initially, it seemed easier to continue expanding renewable electricity, switching heating and transport to electrical sources. However, the massive infrastructure costs of such a policy — required networks and charging infrastructure — are only now starting to become fully apparent. And barely any consumer is aware of the consequences of such a scenario, namely that at times of low availability of renewable electricity sources, there is no guarantee of a reliable power supply. Moreover, the gas sector feels more confident to promote renewable gas now that a number of projects have been proving its potential.

For power-to-gas to be economically viable and to contribute to a successful energy transition, the political framework must be improved. This can be done, for example, by defining power-to-gas plants as storage or energy conversion facilities instead of “end consumers”. This would eliminate the cost allocations and levies which currently hamper commercial viability in Germany. In addition, the European Parliament and Council now have a chance to treat renewable electricity and renewable gas equitably in the Renewable Energy Directive and to link the electricity sector with the gas sector in the Electricity Regulation.

Finally, incentives must be created to use green hydrogen in industry as it would reduce investment costs and enable further applications. This has to happen fast – for the sake of our future energy supply and the fight against climate change.