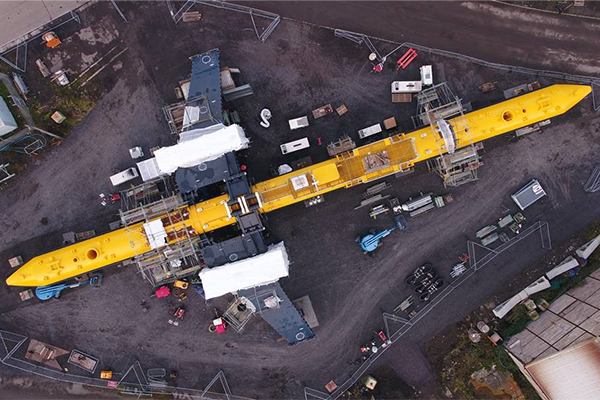 A new sub-target in the revised Renewable Energy Directive for the deployment of innovative technologies is all it would take for Europe to reclaim its competitive edge in renewables.

Europe is dragging its heels when it comes to innovation in next-generation renewables, threatening the decarbonisation process and the 2050 climate neutrality objective.

Fortunately, this year’s revision of the Renewables Energy Directive is an opportunity to structurally fix the problem – and to permanently position Europe on the frontier of renewable energy innovation.

The European Commission has been proactive in creating mechanisms that push the development of innovative energy sources, including deep geothermal, concentrated solar, tidal and wave energy – but these technologies are hitting a wall when it comes to scaling-up.

This wall – or rather ‘valley of death’ – exists because of an absence of market-pull efforts by Member States. The 27 National Energy & Climate Plans (NECPs) are completely focused on meeting 2030 targets – thus neglecting the technologies that are needed post-2030.

The result is that impressive R&I investment in these technologies is undermined by a lack of market deployment. Recent Commission reports have noted the EU’s shrinking advantage in renewables, assessed public & private clean energy R&I trends as ‘not encouraging’, and called for ‘a more strategic approach to renewables’.

A new, binding sub-target would be an important catalyst to revitalise European energy innovation. It would put the onus on Member States to collectively facilitate the deployment of innovative renewables to provide power, heating and cooling. National revenue support and permitting frameworks would be transformed from barriers to facilitators of new renewable energy technology.

Lead markets would be established for the best technologies – as called for in the new European Industrial Strategy. This could effectively eliminate the ‘valley of death’ in Europe for the most promising renewable power and heating & cooling solutions.

This framework would ensure that European ‘market pull’ policies finally complement existing European ‘market push’ policies, such as Horizon Europe or the Innovation Fund. Europe would no longer have one arm tied behind its back in the field of renewable innovation. This would give the long-running SET Plan process some teeth, accelerating those areas where progress has been slow to date.

The cost of not commercialising new renewable sources ‘at home’ is a reliance on technology imports. Claiming that decarbonisation is an economic and industrial opportunity is meaningless if Europe ends up importing superior technology from the other side of the world. It would make a mockery of the European Green Deal.

A European target for innovative renewables can be readily integrated into existing climate & energy governance rules.

Member States would report their deployment plans for innovative renewables via their NECPs. The Commission would then assess these proposals based on the existing Innovation Fund rules, which define renewable energy categories and set out criteria to determine the ‘degree of innovation’.

If the EU-wide target is not being met, the Commission asks Member States to revise their NECPs and up their game accordingly.

An essential component of the target is a diversity requirement, to ensure a range of different innovations combine to meet the objective. With a wide range of renewables in the mix, Europe can create a secure electricity grid based entirely on clean, predictable and self-balancing energy sources.

European associations representing the leading renewable innovations are currently working to formulate a detailed position on how this approach will work in practice, and to propose as well-justified target figure.

We know that to reach net zero by 2050, we need to deploy new and improved renewable technologies at scale. Today’s innovations can deliver true strategic autonomy tomorrow. But without speedy, targeted action, the next breakthroughs in renewables are increasingly likely to take place elsewhere.

With complementary market-push and market-pull mechanisms, the EU would boast a comprehensive innovation eco-system for renewable technologies. It would become a global centre of renewable energy R&I, nurturing and attracting the best ideas, companies and individuals in this field.