The residential heating, ventilation, and air conditioning (HVAC) market could pick up the pace with advances in regulations, technology and a push for carbon fuel efficiency, writes Neil Strother.

The residential heating, ventilation, and air conditioning (HVAC) market typically moves at a steady pace, following new construction projects and the replacement needs in retrofits. However, newer forces are expected to alter that pace somewhat and shape a different market in the coming years.

The key drivers of this change are regulations, advances in energy efficient HVAC technologies and a desire to reduce carbon fuel use.

Heat pump systems also have the advantage of being used for both heating and cooling in homes. They operate by transferring indoor heat to the outside during hot weather, and when the weather turns colder, the same system pulls heat from outside air or the ground to indoor spaces for added warmth.

The overall concept, which can seem counterintuitive, is to harness the transfer of heat instead of generating heat and then put the transfer process to use for both heating and cooling.

Until recently, heat pumps struggled to gain much acceptance in colder northern climates. However, manufacturers have developed products that can heat a home during the winter when outdoor temperatures hover between -17.8° C and -15° C. So, the notion of depending on natural gas boilers or furnaces is starting to dissipate in colder regions, and heat pumps are making some inroads.

Nonetheless, one of the advantages of heat pump systems is energy efficiency. For instance, a heat pump system can reduce electricity use for heating purposes by as much as 50% compared with electric resistance heating systems and baseboard heaters.

However, a big disadvantage of a heat pump is the upfront cost. A typical new heat pump system costs more to install compared with other systems like a boiler, but the energy savings over a few years from a heat pump can offset the additional costs.

Regulators that set building codes and other governmental bodies often have a direct or indirect impact on the HVAC market, setting standards for efficiency and the type of equipment to be used in residential structures.

For instance, despite holding a positive view of heat pumps (calling them a perfect match for reaching the 2030 framework), EU regulators have established regulations affecting these systems. Specifically, the EU has stringent guidelines around controlling emissions from fluorinated greenhouse gases (F-gases), which are used in heat pumps.

In the US, the ENERGY STAR program sets standards that manufacturers of HVAC equipment adhere to in terms of efficiency ratings. Chinese regulators have set up a regimen called the Green Building Evaluation Label that affects HVAC systems. In India, the Bureau of Energy Efficiency Standards and Labeling Program sets the rules, while Australia’s Minimum Energy Performance Standards determines the benchmarks.

Not only do regulators want people to use less carbon in HVAC systems, many consumers share this goal. As recent polls indicate, many consumers see global warming as a threat, and steps they can take to reduce their use of carbon—in this case for heating and cooling their homes—would be worth serious consideration.

In Ireland, for example, the Sustainable Energy Authority is offering money to homeowners to install heat pump systems to help them lower bills and reduce carbon emissions.

In the Netherlands, the move towards decarbonising has the weight of government squarely behind it. Dutch authorities want all residential buildings to be non-natural gas by 2050. The mandate is part of an overall goal to reduce CO2 emissions from the built environment by 80% in the next 30 years.

Thus, technologies such as electric-fuelled heat pump systems are expected to gain plenty of traction.

Globally, Navigant Research expects revenue associated with residential HVAC equipment to grow from $136.4 billion in 2019 to $199.3 billion in 2028, at a compound annual growth rate (CAGR) of 4.3%. While much of the volume will likely be from traditional HVAC systems, a growing portion is expected to come from innovative systems like heat pumps. 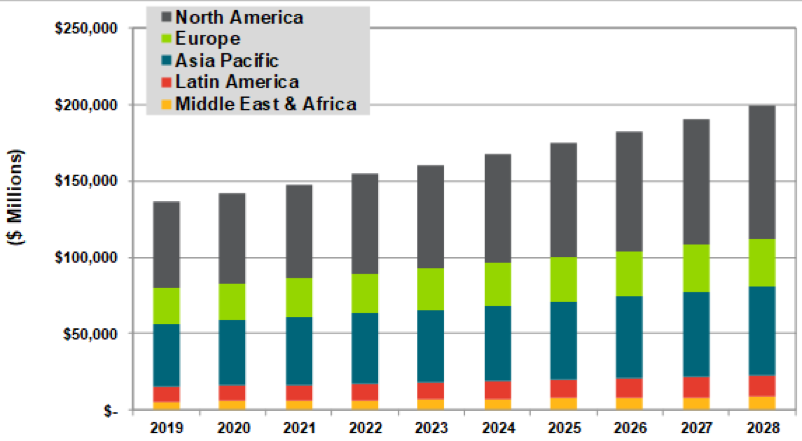 Given these forces, the residential HVAC market will evolve over the coming decades to include innovations that reduce energy consumption but maintain comfort. But given the historically steady pace of this market, do not expect the market to overheat too much.