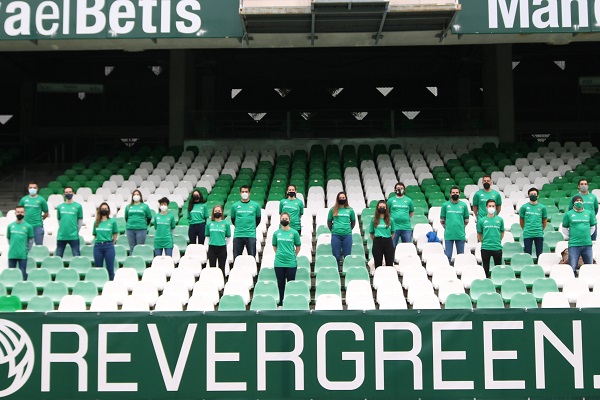 Image provided by the European Football for Development Network (EFDN)

Real Betis Balompié is an excellent example of what football clubs can do to fight climate change and to have an impact well beyond the pitch. All it takes to achieve positive change and winning ways is leadership, vision, and the creative energy of fans and the community.

Marius Stegemann is a Marketing & Communications Manager at The European Football for Development Network (EFDN), a partner in the consortium of the GREENFOOT project.

In 2019, Real Betis was the first football club in the world to join ‘Climate Neutral Now’, an initiative of the United Nations. Since then, the Spanish club walks the talk and launched the programme ‘Forever Green’, which is actively supported by La Liga in October 2020.

The aim of ‘Forever Green’ is to raise awareness among football fans, and people at large,  about the need to fight against climate change, and facilitate cooperation and actions between clubs to reduce their carbon emissions. The vision is that the most popular sport in the world has to take its responsibility, working with its fan base, to protect the planet for future generations.

The goal is to measure and reduce the carbon footprint, and compensate inevitable emissions by purchasing carbon offsets which are projected which reduce emissions elsewhere. Real Betis, for example, supports a wind farm, emission reduction project in Costa Rica.

With the cooperation of specialized companies, the club undertakes different waste separation and collection actions to create a recycling culture among its fans.

In normal times, on matchdays, Real Betis’s stadium is filled with more than 50,000 enthusiastic fans. The Club promotes many different initiatives to boost sustainable transport with electric vehicles, bicycles or public transport. Fans are the Club’s main allies in fighting climate change.

The Club has launched several ecologic actions and ideas to promote a greener planet. These include the creation of urban farms, reforestation, or actions to clean the River Guadalquivir which cuts across Seville.

The Club installed a LED lighting system at Benito Villamarín Stadium to contribute to energy efficiency. Enjoying plenty of sunshine in the South of Spain, solar panels have been installed to generate photovoltaic renewable energy for its own use. The Club has eliminated paper in its operations, whenever possible, for example, entrance into the Stadium is done via smartphones.

Rafael Muela Pastor, Head of the club’s foundation, highlighted throughout his presentation at the 15th EFDN Conference how Real Betis Balompié wants to become the most sustainable football club on the planet. The presentation is available on the EFDN website.