Reasons to be optimistic, despite modest EU climate targets 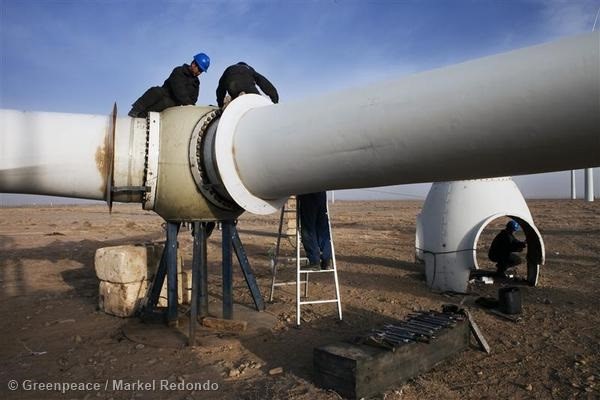 A wind turbine being assembled in China. Chinese coal consumption is decreasing for the first time in decades.The EU is no longer alone in taking action against climate change and will have to work header to remain in the lead. [Greenpeace/Markel Redondo]

The EU’s targets for emissions cuts, energy efficiency and renewables, agreed by EU leaders last week, were a disappointment, says Joris den Blanken. But there are reasons for hope that truly ambitious EU position can be set out ahead of the 2015 United Nations Climate Change Conference in Paris.

Last week, the EU agreed on its 2030 targets for emission cuts, energy savings and clean energy.

Greenpeace has been clear in its assessment. The agreed level of emission cuts is inadequate, and the deal risks slowing down Europe’s clean energy investments.

Despite this, there are four good reasons to be optimistic about what this decision means for the global fight against climate change.

1.Bridging a major divide between richer and poorer EU states

A longstanding deadlock between richer and poorer member states had paralysed EU climate and energy talks for years. During the last three years, the Polish government was unrelenting in its opposition to most of the proposed EU climate and energy measures. Poland was often successful in finding allies in Central and Eastern Europe. These governments share a strong desire to catch up economically with the richer member states in Western Europe, and feared climate policies could hinder that ambition.

But thanks to the political will of EU leaders, and the tireless championing of fairness and flexibility in the deal behind closed doors by the outgoing European Council president Herman Van Rompuy, the differences between richer and poorer member states were sorted out.

This is very good news as a similar stand-off between emerging and advanced economies is also apparent at the global level, during the international climate talks.

If the governments of Poland (a country for over 90% dependent on coal for power production) and Bulgaria (with a GDP per capita 16 times lower than that of Luxembourg) can agree on EU climate and energy targets, it may be possible for “catch up” economies like South Africa and Brazil to sign up to an international climate deal.

2.China and the US start fighting against emissions

The United States and China fought binding regulations to cut carbon emissions during the 2009 Copenhagen talks. But things have changed since then.

Among the big emitters, the EU is no longer alone in taking action on climate change. In fact, it will now have to work harder to stay in the lead.

Chinese? coal consumption is decreasing for the first time in decades, according to Greenpeace analysis.?? 11 out of 34 Chinese provinces are planning measures to bring down the consumption of coal by 2017.? And in an effort to fight pollution, seven Chinese provinces and cities have established pilot carbon schemes to prepare for a nation-wide carbon market to be established in 2016.

In the US, coal consumption peaked in 2007 and dropped by one fifth by 2013. About half of the American reductions in coal use are the result of wider use of renewable energy and energy efficiency investments.

The actions of the world’s two biggest emitters are meaningful. China and the US are expected to put forward emission goals in the next months.

3.EU governments have another chance to get it right

The language in the EU agreement last week explicitly allows for increasing the level of ambition of the climate target. The EU’s 2030? deal should therefore be seen as an ?opening offer.

Professor Jim Skea, a vice chair of the Intergovernmental Panel on Climate Change, agrees that the EU target of 40% greenhouse gas cuts by 2030 is too weak. His conclusion is in line with detailed analyses of EU 2030 target by the Netherlands Environmental Assessment Agency (PBL) which shows 47% emission cuts are required. Ecofys research shows around 49% and Stern shows that 50% reductions are necessary to have a fair EU contribution which seriously curbs climate degradation.

And it’s not just analysts who agree. The governments of Sweden and the UK have called for 50% greenhouse gas emission reductions.

Greenpeace is calling for an upgrade to 55% greenhouse gas cuts, in order to also correct for the surplus of emission allowances in the EU carbon market.

The EU has already touted a plan to increase the level of the announced emission goals of all governments, before the Paris climate summit in 2015. Then, if not sooner, the EU should raise its own target.

With costs of clean energy technologies still falling, new momentum building in the international climate talks and energy savings high on the agenda, there are plenty of opportunities for the incoming European Commission president to put his personal stamp on these proposals.

Juncker promised to make Europe the world number one in renewables. He committed to forward-thinking climate change policies, and stated that Europe needs at least 30% energy savings in order to remain credible.

Let’s hope that the legislation he will now propose to EU ministers and the European Parliament reflects those ambitions. That would mean an even higher level of EU ambition making an appearance at the Paris climate summit next year.